Developers have shared project plans with Urbanize Atlanta that could inject hundreds of new residents and retail street life into blocks south of Underground Atlanta that have struggled with disinvestment, vacancy, and blight for decades.

Newport RE, the American arm of Germany-based Newport Holdings, has made a name for itself in Atlanta in recent years by amassing a huge portfolio of South Downtown properties—48 buildings and 4 acres of surface parking across 10 contiguous blocks—that the company calls the "largest collection of historic commercial buildings in the country.”

From that palette, Newport has unveiled its most ambitious plans for infill development to date: two mixed-use towers that would alter the skyline between the Centennial Yards megaproject and Georgia State Capitol, just south of MARTA’s busiest station and the ongoing redevelopment of Underground Atlanta.

Newport filed for special administrative permitting Thursday to begin the process of constructing two buildings on the east and west sides of Broad Street. The projects would bring 650 new apartments and spaces for more than a dozen retail and restaurant concepts, officials tell Urbanize Atlanta. 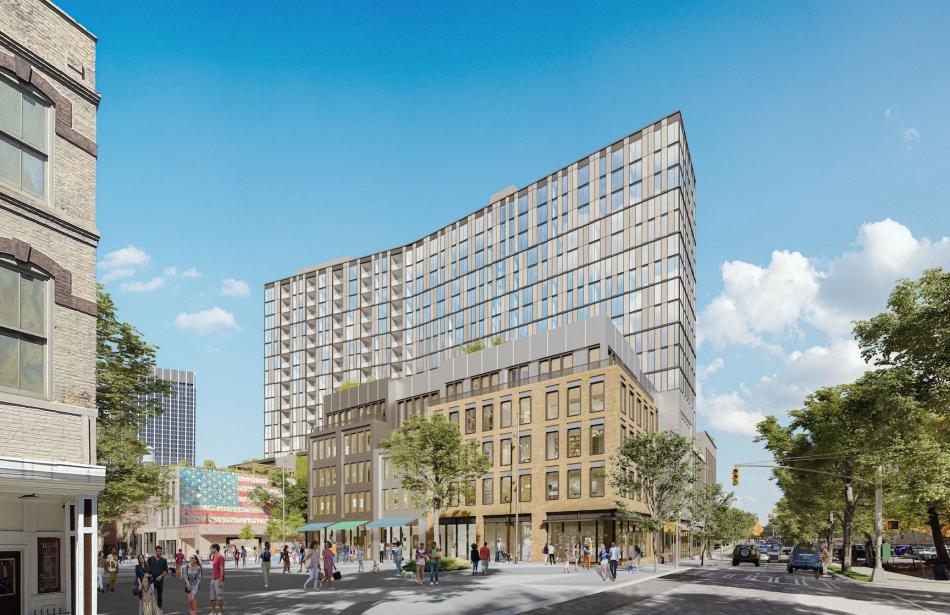 Plans for the east tower where Mitchell and Broad streets meet. Courtesy of Newport RE; designs, Studios

The company hopes the injection of so much housing will breathe life into the South Broad Street area—creating “a true anchor of Atlanta culture and community”—and complement its adaptive-reuse projects Hotel Row and 222 Mitchell, which are located less than a block away.

Specifically, Newport’s first plans for ground-up new construction in South Downtown call for one building to rise 18 stories and the other 21 stories.

The taller, westernmost building (nearest Mercedes-Benz Stadium and today’s Gulch) would include 300 units, while 350 more apartments would rise across the street. Plans call for a mix of studio, one-bedroom, and two-bedroom rentals, with many of them offering balconies, according to Newport officials. 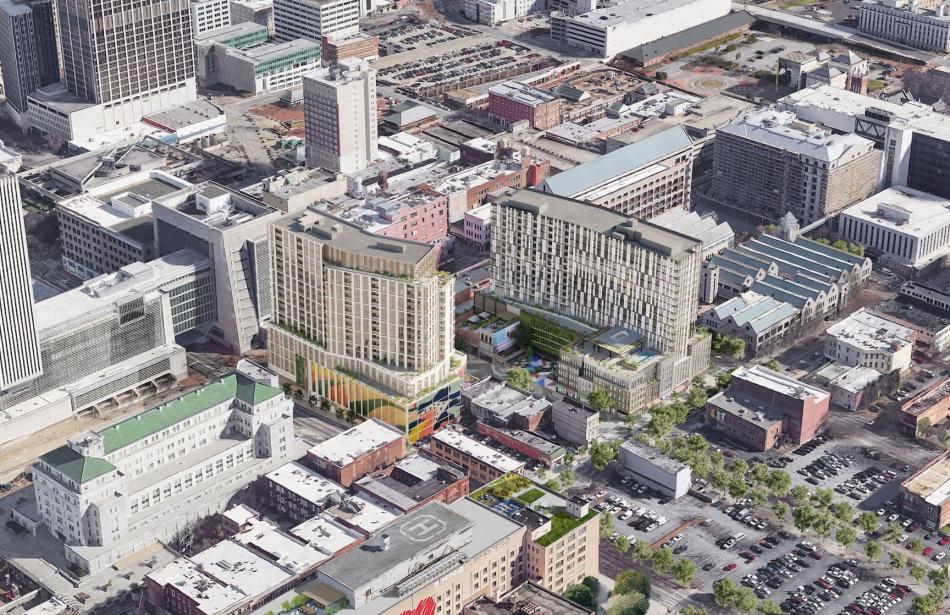 Where the new residential buildings would meet Forsyth Street (left) and Broad/Mitchell Street (right). Courtesy of Newport RE; designs, Studios

The apartment buildings, as designed by Studios Architecture, would replace underutilized parking garages, surface parking lots, and vacant buildings, per Newport. Most of the Broad Street buildings in the vicinity have long been vacant but nonetheless retain a distinctive feel with detailed facades, which in most cases will be retained and restored, per renderings and company officials. Broad Street’s wide, pedestrian-friendly sidewalks and distinctive murals will also be woven into the infill development plans.

Changes across two blocks will span from MLK Jr. Drive down to Mitchell Street, and from Forsyth Street to Peachtree Street.

“Many of these buildings haven’t been substantially cared for in the last 20 to 30 years,” April Stammel, Newport senior vice president, wrote in an email. “We’ve learned a few lessons from the work along Hotel Row and have done an exhaustive amount of interior cleaning, abatement, and structural analysis to help us determine exactly what’s going to be needed to set these buildings up for the next 100 years.”

In terms of workforce housing, Newport is partnering with Invest Atlanta to offer 20 percent of units in the east building, or 70 apartments total, for residents earning 80 percent of the area’s median income. 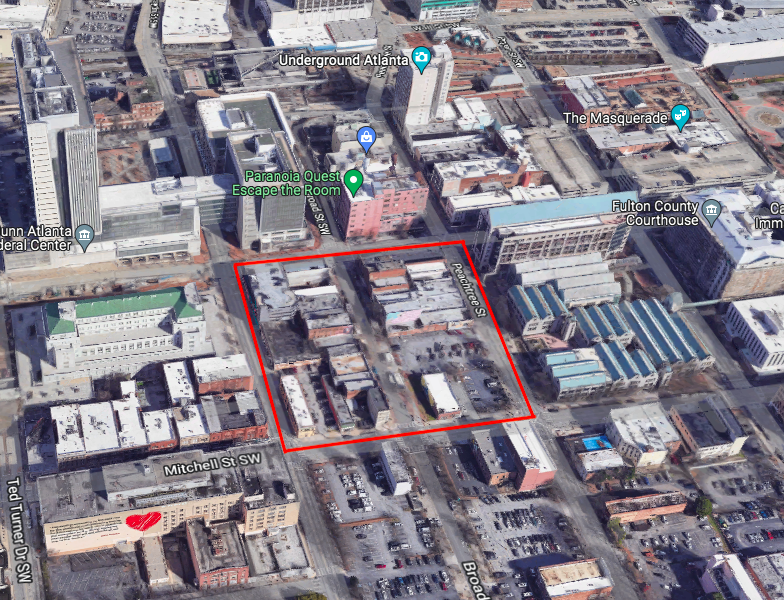 Between the adaptive-reuse buildings and new construction, Stammel says the project will also introduce more than 70,000 square feet of new retail into the neighborhood—with 7,000 square feet of that designated for below-market rates, as made possible by the Invest Atlanta partnership. A “healthy mix” of multi-floor restaurants and shopping options is planned, topped by rooftop decks overlooking Broad Street and public plazas below, she says.

“Food and beverage will still be incredibly important to keeping a consistent energy on the street,” says Stammel, “but this block will give us the ability to round out the mix with creative retail and uses that are important for residents who live in the neighborhood.”

The blocks in question were part of Atlanta’s original mercantile district but have grappled with decades of neglect. Construction of the Five Points MARTA station in 1979, as Newport officials point out, further disconnected South Downtown from the subdistrict’s lifeblood business and tourist populations, forcing many businesses to close.

Robyn Jackson, Atlanta Downtown Neighborhood Association president, has lived in South Downtown near Newport’s proposal since 2006—and in downtown overall for nearly 30 years.

“We look forward to our neighborhood growing,” Jackson wrote via email. “I’m excited to see that [Newport’s plans] promise to bring needed residential housing stock to downtown, specifically for car-free or car-light Atlantans. Also important are the design’s opportunities for street-level activation and public space—hopefully an example for future projects around our urban neighborhood.” 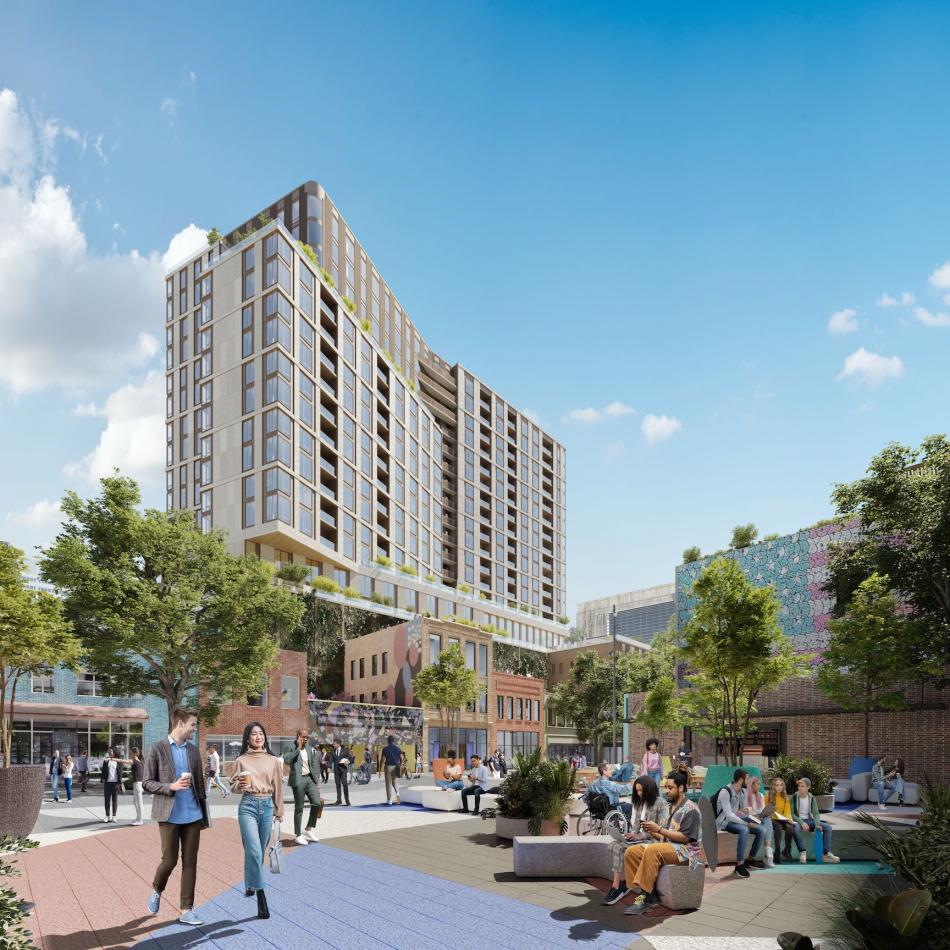 View of the 21-story, westernmost tower plans on Broad Street. Courtesy of Newport RE; designs, Studios

Newport’s original intent was to convert Broad Street to a pedestrian-only plaza, as renderings hint, but that might not be possible, according to Stammel.

“We recognize the necessity to coordinate with all the other development happening around us—most notably the redevelopment of the Five Points MARTA station and proposed BRT routes,” she says. “We’re working with [Central Atlanta Progress], MARTA, and the Departments of City Planning and Transportation to ensure our voice and intention is carried through these projects in a way that benefits the entire downtown neighborhood.”

The mixed-use towers’ design firm, Studios Architecture, was founded in 1985 and counts offices in New York, Los Angeles, San Francisco, Washington D.C. and internationally in Paris and Lyon. Brasfield & Gorrie is on board to build the projects.

Stammel says Newport aims to begin construction in the first quarter of 2023. Both blocks are scheduled to fully deliver, she says, in 2025.

“For this to be a neighborhood, there simply have to be more neighbors,” Stammel said in a prepared statement. “There’s a craving for city culture [downtown]—for more walkability, entertainment, and a desire to be part of something bigger. We feel a great responsibility and take very seriously the opportunity to develop the best and highest use for the neighborhood on every inch of the land we own.”

Overall, Newport’s plans call for building more than 1,000 new apartments downtown, alongside Class A office space, retail, community spaces, and places for the artistic community that helped make the area more vibrant during shaky economic years, according to Newport officials.

Have a closer look at the most substantial, proposed changes in the South Downtown pipeline to date in the gallery above.