Now that international travel restrictions have eased, Olaf Kunkat had the opportunity to travel from Germany and walk the blocks south of Atlanta’s Five Points on a recent warm winter’s day, perusing what the developer and architect foresees as part of his legacy project: the reshaping of a top American market’s downtown.

Kunkat founded Germany-based Newport Holdings after the Berlin Wall had fallen, purchasing literally bombed-out buildings in East Berlin, restoring them, and morphing himself from architect to developer almost by accident. A few years ago, Kunkat was standing at the corner of Broad and Mitchell streets downtown, attracted to Atlanta’s welcoming spirit, rampant growth, historic if neglected downtown architecture, and startlingly cheap real estate in comparison to European urban cores. As the story goes, he asked himself: How did Atlanta let this happen?

After 20 months of poring over tax records, knocking on doors, and tracking down property owners (some of whom had no idea they’d inherited parts of downtown Atlanta), the American arm of Kunkat’s company, Newport RE US, had conducted 26 transactions and spent in the ballpark of $100 million. That massive portfolio today includes 48 buildings and 4 acres of surface parking along Peachtree, Mitchell, and Broad streets, and Martin Luther King Jr. Drive.

As Kunkat saw while walking the streets this past week, his company’s vision for the area is starting to visibly come together, following the hammer thwack of a global pandemic and so much market uncertainty.

“We were pushed back, and now it feels very exciting to see that the momentum is still there, and people are really still excited about it,” Kunkat said in Newport’s Mitchell Street offices, the U.S. headquarters. “I think this causes a kind of correlation with us, keeps us really motivated.” 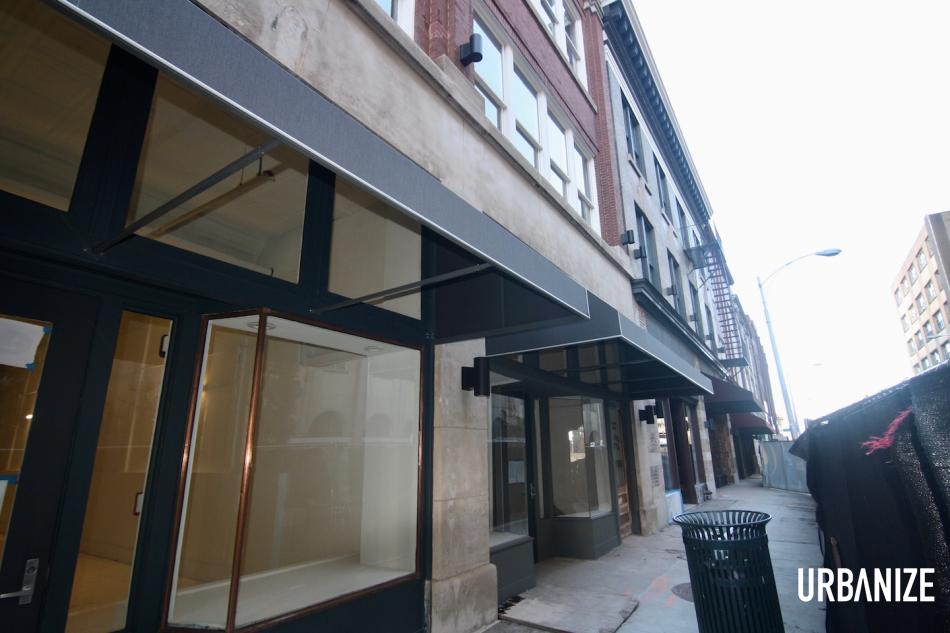 New Hotel Row awnings and storefronts. Beyond the Sylvan, the venture includes the former Scoville and Gordon hotels, plus an original textiles building. Josh Green/Urbanize Atlanta

Newport’s plans are part of a broad “South Dwntn” reimagining of the district, predicted to roll out across the next decade, that includes CIM Group’s multi-billion-dollar Centennial Yards mega-project and others.

Newport's plans for hundreds of residences are being formulated, and an office-and-retail overhaul of the 222 Mitchell building (formerly C&S Bank Building) is underway. But first comes the revival of downtown’s Hotel Row.

According to April Stammel, Newport’s senior vice president in the U.S., construction crews are weeks away from handing over spaces to confirmed retail tenants to begin buildouts. The goal, she says, is to create “one of those small, walkable downtown experiences” with 10 retail spaces along Mitchell Street totaling about 90,000 square feet, while 300,000 square feet of office space is also in the works.

First out of the gate will be a Slater Hospitality pizza concept, underground cocktail bar, and quick-service chicken sandwich eatery. Stammel expects to announce two more retail tenants and a “brewed concept” by the end of this quarter. Just don’t expect another beer brewery—at least not for now.

“What we learned really early on is that our buildings are not set up great for [beer] breweries,” says Stammel. “We don’t fit height needs, [or the] space needs between columns, and accessibility for loading trucks. But we are talking to something else that can be brewed.”

Newport hopes to capitalize on proximity to MARTA, Mercedes-Benz Stadium, Georgia World Congress Center, State Farm Arena, and the State Capitol. At the outset, parking will be provided on existing lots the developer owns.

Chances are you need not be an Atlanta history buff to find this type of project interesting. Come explore in the gallery above—no hardhat required.