A hotel project that promises to dwarf Atlanta’s largest sports coliseum, at least in terms of sheer height, is beginning to make its mark on downtown’s skyline.

The Gensler-designed hotel project was on track to launch in late spring 2020, just after Atlanta’s planned NCAA Final Four basketball crowds had cleared out of downtown, but COVID-19 pandemic lockdowns and subsequent economic instability scuttled those plans.

Now, in terms of stories, the 40-story Signia by Hilton Atlanta project stands about ¼ complete. Construction has reached five stories above the lobby and base levels, with 32 more to go, based on project renderings. 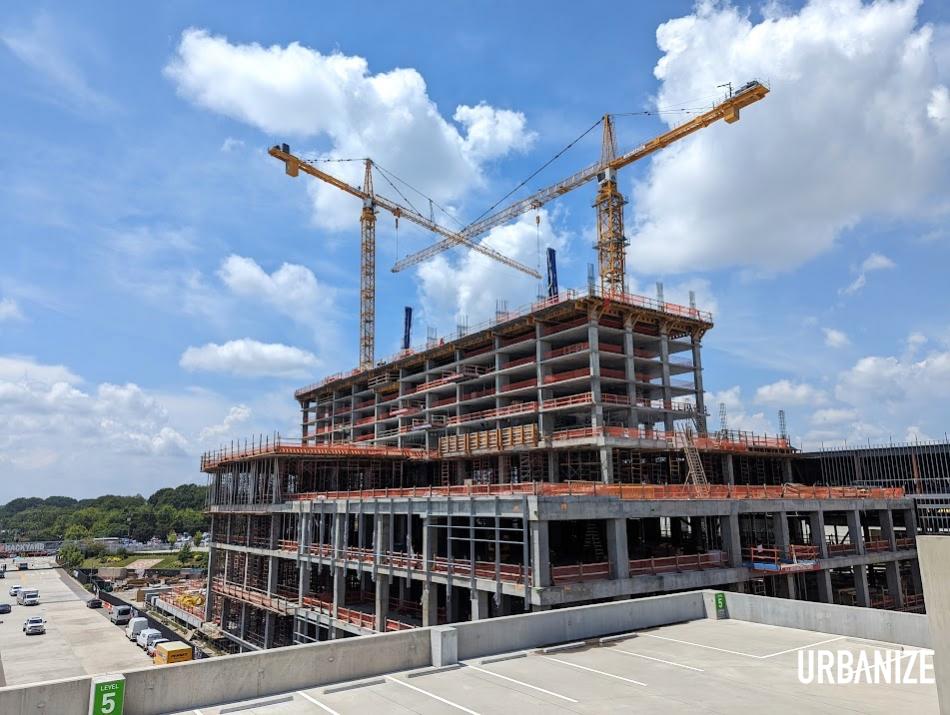 Construction progress on the Signia by Hilton hotel as seen this past weekend. Josh Green/Urbanize Atlanta

For context, the city’s next tallest hotel—the 52-story, John Portman-designed Marriott Marquis on the flipside of downtown—stands about 120 feet higher.

The category is still led by the 73-story Westin Peachtree Plaza Hotel, another Portman building completed in 1976 that remains Atlanta’s fifth-tallest building.

The glassy, flat-topped new lodge joins a groundswell of new construction activity around the Gulch this year, with much more expected in advance of the 2026 World Cup.

The Signia project, which will be owned by GWCCA, calls for 75,000 square feet of meeting space around the property, a restaurant, bar, and top-shelf wellness amenities, per Hilton.

The hotel will be the most visible part of the GWCCA’s 2020 Vision master plan, a sweeping campus redo. Rising over the Home Depot Backyard, it's planned to link with the GWCC by way of Building C at the Georgia Ballroom level.

In the gallery above, see where the Signia tower stands these days and how it’s expected to look and function next year.

CORRECTION, 8:07 a.m., August 9: This story has been updated to reflect the correct height, in feet, of the Marriott Marquis hotel.