When it comes to best-city rankings, Atlanta’s recent winning streak is continuing at such a pace we'll probably be accused of cheating soon.

The latest victory: CoworkingCafe, a national coworking space search service, has crowned Atlanta the best city in America for working remotely as the WFH zeitgeist charges on.

CoworkingCafe—which, like CommercialCafe, is part of the Yardi network—set out recently to determine what the recipe is for a “great remote city” these days, and Atlanta was among 54 cities studied.

The title of the resulting report, in fact, is a bit of a spoiler: “All Eyes on Atlanta: Best Cities for Remote Workers.”

So what’s the ATL doing right?

Per the website’s findings, Atlanta ranks first for density of coworking places—24 shared office spaces for every 100,000 residents—among all places studied.

Analysts also found that Atlanta has the highest availability of public Wi-Fi networks per 100,000 residents. That allows for “maximum flexibility for freelancers and remote workers alike,” as CoworkingCafe puts it. 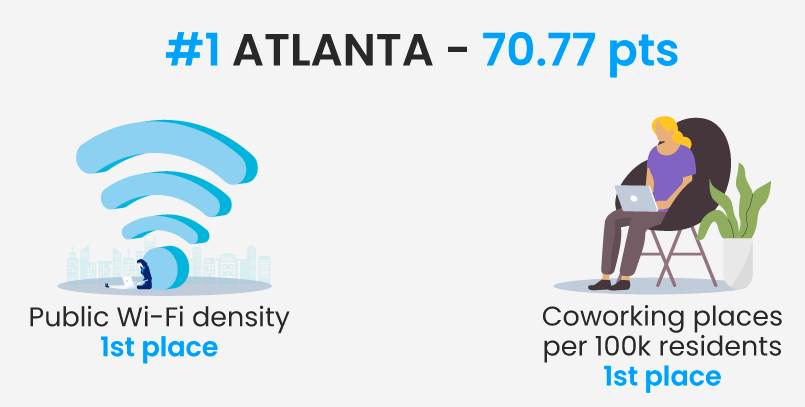 Cost of living played a huge roll in the top 10, with St. Louis ranking second overall, followed by Pittsburgh, Orlando, and Minneapolis, respectively.

Overall, Southern cities “have the highest number of entries in the top 10, due to their lower cost of living and unrivaled entertainment scene,” analysts noted. (Per the metric breakdown, venues that were counted included everything from performing arts centers to amusement parks, sports arenas, restaurants, and bars.) 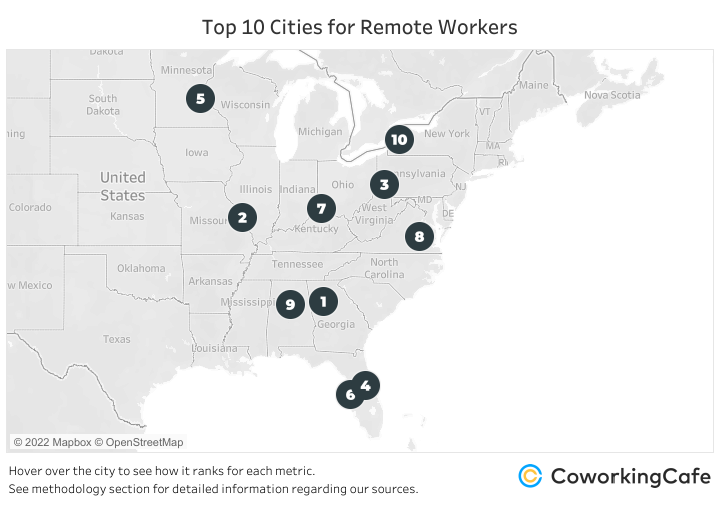 U.S. Census Bureau figures show the number of Americans working remotely tripled between 2019 and 2021, though some employees have more recently been summoned back into offices.

As Axios Atlanta reported last month, nearly 40 percent of workers age 16 and older in Atlanta now work from home—good for fifth place in the country.

But the Big Kahuna of arbitrary accolades came just last week, when Money magazine declared Atlanta “the best place to live in the U.S.” in a cover story. That was such a big deal, apparently, the mayor’s office quickly distributed the story verbatim as a press release.