Atlanta has again topped a list of city rankings that highlights attributes of Georgia’s capital (for once) and is gaining national attention.

Fresh off its crowning as America’s “most livable” city by British publication The Economist, Atlanta finished first in a recent ranking of the 20 best U.S. cities for Generation Z by a fairly wide margin.

CommercialCafe based its findings for cities relocating Gen Zers might want to consider on eight indexes important to quality urban living, especially among young people: affordability, unemployment rate among Gen Z, internet speeds, leisure and dining options, prevalence of parks, options for green commutes, and school enrollment, among other criteria. 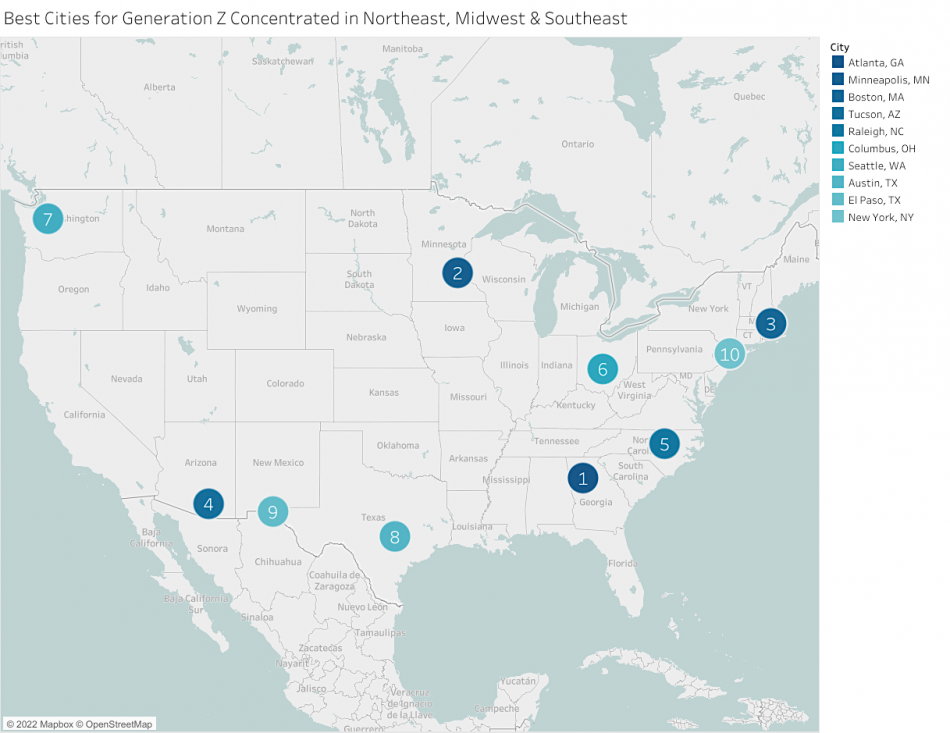 After scores for each metric were totaled, Atlanta came out more than three points above the second-place Gen Z option, relatively cheap Minneapolis. (Gen Z—aka, “zoomers”—is generally defined as people born between the mid or late-1990s and early 2010s; in its coverage of the CommercialCafe analysis, the New York Times pegs Gen Z members as being between 18 and 25 years old now, with a full one-third of them still living at home, grappling with inflated costs of living.)

Overall, CommercialCafe found the best cities for Gen Z are concentrated in the Northwest, Midwest, and Southeast. The country's 45 largest cities were studied.

Atlanta has taken lumps in the past for its lack of access to public greenspaces, but that appears to be changing with the openings of several parks last year alone, including the sprawling Westside Park, functional Cook Park in Vine City, and a park-topped parking garage in Grant Park.

CommercialCafe took notice. Analysts noted ATL has the largest number of parks (7.61) per 10,000 residents. “Atlanta is a paradise for Gen Z joggers, pet owners, or those who simply enjoy long walks,” analysts wrote in summation.

Atlanta also shined in the category of Gen Z school enrollment (55 percent enrolled in some form of education program), finishing behind only Boston.

Other attributes included Atlanta’s sheer number of youthful Gen Z residents—almost 1 in 10 people living in the city, which was good for the fourth-highest share on the list. That figure “is likely to increase given the city’s steady growth” and prevalence of companies “flocking to the city… thanks to the area’s availability of educated young professionals,” per the analysis.

Not surprisingly, Atlanta didn’t do so hot in the category of green commuting—that is, not driving to work or school—among Gen Z residents, as just 15.9 percent walk, bike, or take public transportation. (Compare that to almost 64 percent in New York, or 47.5 percent in Boston).

Atlanta’s ballooning cost of living landed it at so-so 28th place in the study’s affordability index, though most cities ranked higher in that category are significantly smaller.

“Coupled with a cost of life index near the national average and low unemployment (5.1 percent),” reads the summary, “Atlanta is a great candidate for ticking all of Gen Z’s boxes—community, walkability, economic prospects, and educational opportunities.”