The skyline beyond the Atlanta Braves’ Truist Park outfield has cleared a significant hurdle toward changing again, despite some pushback and “nay” votes from government leaders.

The Development Authority of Cobb County on Friday passed a nearly $160-million bond request (albeit barely) that would help fund a high-rise mix across the street from left and centerfield walls.

The two-building project is set to be called The Henry, in homage to late Braves legend Hank Aaron. 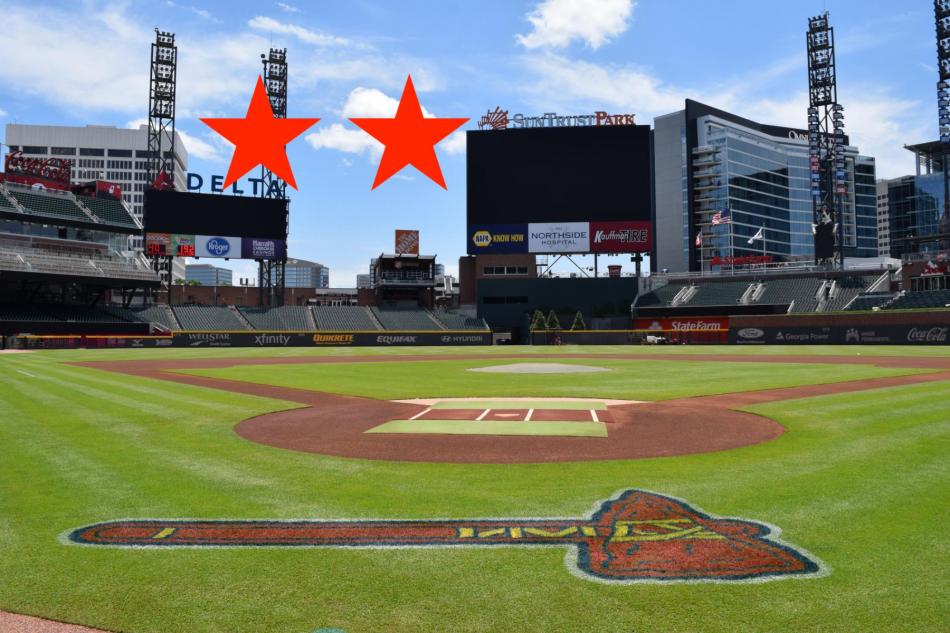 Where the two Henry buildings would generally stand, in relation to the 16-story building that houses the Cobb Chamber of Commerce (at left) and The Omni hotel (right). Shutterstock

Three members of the seven-member Cobb development authority opposed the bond resolution, the first step toward a bond issuance and formal tax breaks. According to the Marietta Daily Journal, the dissenters questioned whether 350 new jobs the development is expected to generate, with average salaries of $55,000, were worth tax incentives usually reserved for high-caliber tech jobs or company headquarters.

Two of those naysayers said the project would likely be built without public financing in the booming Battery area, a refrain that'll sound familiar to followers of Atlanta BeltLine development.

The Henry proposal is being put together by Atlanta-based SK Commercial Realty, Nebraska-based Goldenrod Companies, and the Braves’ real estate arm, Braves Development Company. It’s expected to cost about a half-billion dollars. 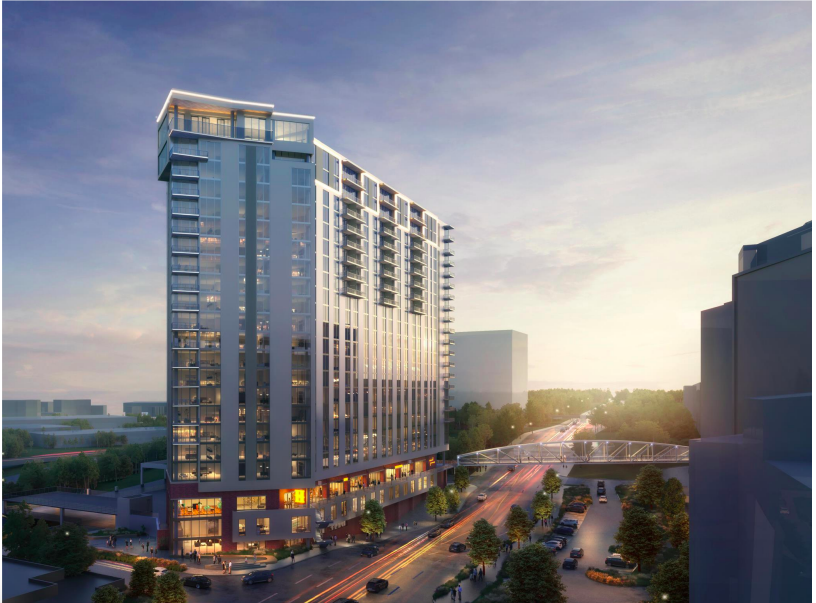 Planned facade for the apartment and retail component of The Henry project along Circle 75 Parkway, with the Braves' stadium depicted at right. A second building with a hotel would rise at left, per developers. Goldenrod Companies, via Braves Development Company

Developers announced earlier this year the tower fronting Circle 75 Parkway would include 502 upscale apartments with retail at the base—a significant injection of new residents outside the MLB ballpark. A bridge over the multi-lane road would link the property directly into The Battery.

Renderings indicate that tower would stand at least 22 stories—significantly taller than the 16-story Omni next door, which peers into the stadium.

Plans for a second building adjacent to the apartment tower became clearer in last week’s meeting, as the MDJ relayed. That component is likely to include a 250-key hotel—slightly smaller than the Omni, in terms of room count—with more retail at its base. A Goldenrod rep told board members the company is talking to Marriott to operate the new lodge.

The $160 million in bonds would not be used to finance the apartments (all geared toward “high-earners,” per developers), but rather infrastructure and then retail and hotel facets of the development, per the newspaper. 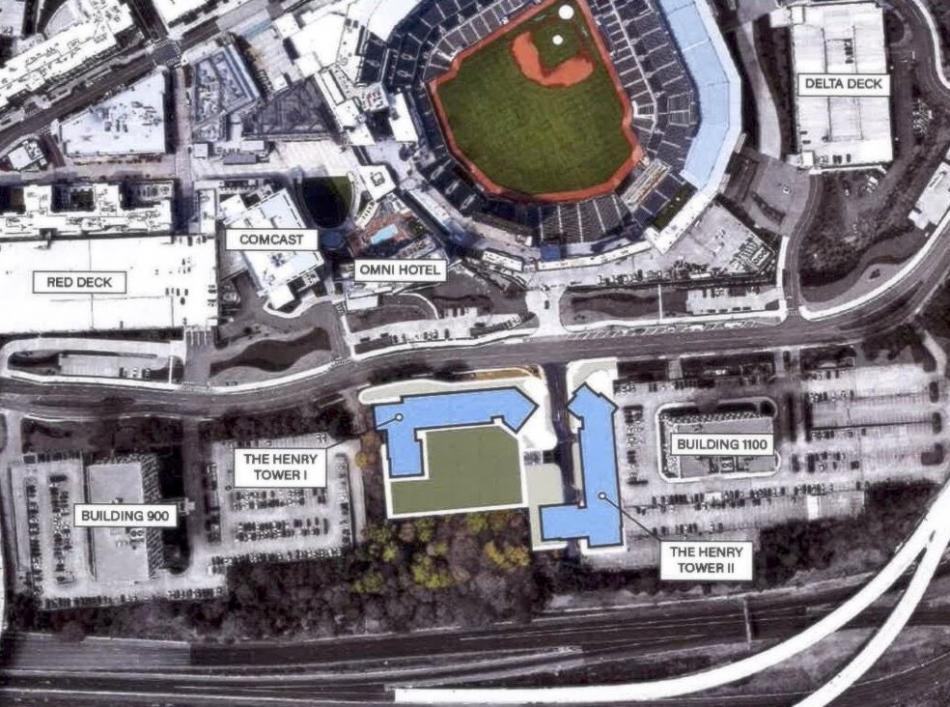 How the roughly $500-million Henry proposal would be slotted amongst existing buildings and parking lots (replacing one eight-story structure), just beyond the Truist Park outfield. Goldenrod Companies; submitted, @cbenderatl

Should The Henry come to fruition as planned, it’ll mark the most significant changes to the skyline around The Battery since TK Elevator’s new North American HQ finally came online in February, blazing with what’s been described as the largest LED display on any U.S. building.

To clarify for Cobb-weary Atlantans, none of the above should be confused with another glassy project under development on the flipside of the stadium, behind home plate.

That’s where a 250,000-square-foot office building will rise nine stories on the northwest side of Truist Park, just up the street from the Coca-Cola Roxy music venue. An adjoining parking deck with 750 spaces will also be built, according to the Braves’ real estate arm.

The Class A office building will serves as the new national headquarters for Truist Securities, Truist’s full-service corporate and investment bank.

In announcing that deal in April, officials said the office building will house about 1,000 Truist Securities employees, roughly 300 feet behind home plate. Included in the plans is a 42,000-square-foot trading floor.

So, in short, an influx of potential Battery and baseball customers is on the horizon.