Seemingly out of the blue, Cobb County government’s official Twitter feed on Monday rallied behind plans for a massive interstate overhaul that would add toll lanes but no rail transit to the top-end Perimeter—and a minor, urbanist-led online kerfuffle ensued.

The Twitter account is more commonly a resource for COVID alerts, cheery festival updates, and boil water advisories. Maybe voicing support for what Georgia Department of Transportation officials have dubbed the I-285 Top End Express Lanes project was related to Labor Day, given the immensity of the job. “Cobb is among the metro counties and local governments behind developing the plan,” the Monday afternoon post read. Maybe it’s apropos of nothing.

In any case, it presents an opportune time for catching up on where this potential game-changer of an infrastructure project stands.

Quick background: As first unveiled in vivid (albeit conceptual) detail in early 2020, GDOT intends to construct the I-285 express lanes project in three phases, with a goal of improving mobility and more quickly moving freight on one of America’s most traveled and heavily congested segments of interstate highway. 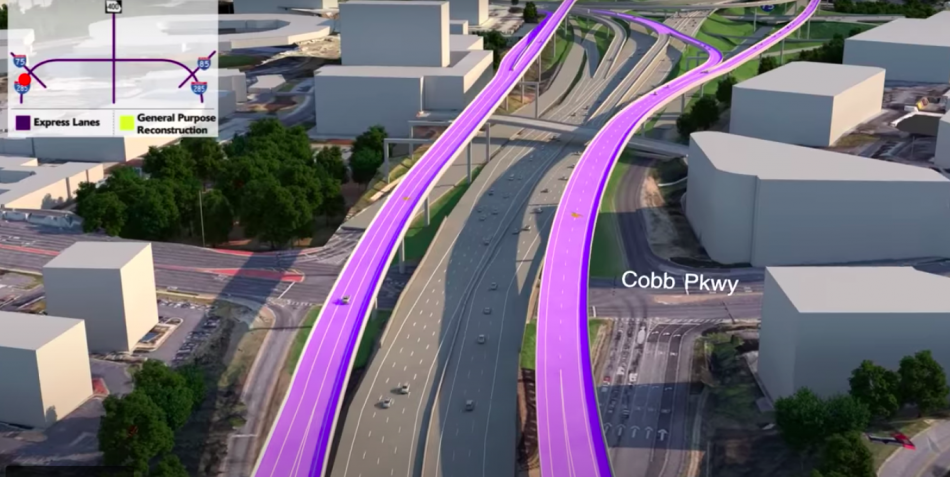 Where the elevated express lanes would rise from at-grade sections and take flight over Cobb Parkway, as seen heading clockwise around the Perimeter, per GDOT's conceptual video. Georgia Department of Transportation

In a nutshell, the project would add two toll lanes—separated by barriers from existing lanes—in both directions of I-285 and along sections of Ga. Highway 400. Around the Perimeter, the lanes would be a mix of at-grade additions and elevated lanes that tower over the existing interstate (and many key points in Cobb County).

They would eventually span from South Atlanta Road on the western side of Atlanta, through the Cobb Cloverleaf and Spaghetti Junction, and around to Henderson Road near downtown Tucker. 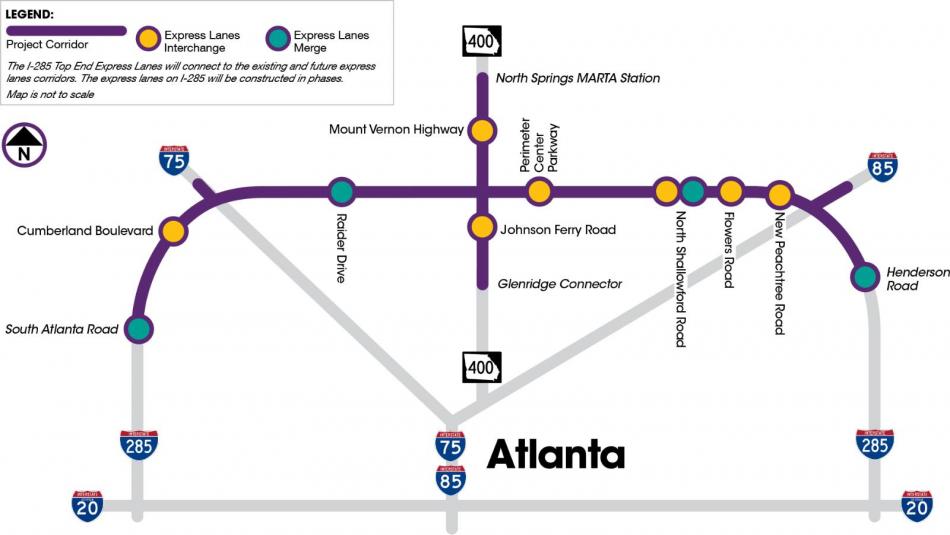 The scope of the I-285 Top End Express Lanes project, arcing across Atlanta's Perimeter. Georgia Department of Transportation

Another intent of the express lanes project, as GDOT has stressed from inception, is to provide mobility choices (and more reliable trip times) for metro Atlantans. However, that doesn’t mean a new system of heavy or light rail will be whizzing alongside added toll lanes. It means public transit providers that already operate buses and other vehicles in the corridor—MARTA, Xpress, and “state-registered vanpools”—will be able to use the new lanes for free, with no additional costs to riders, according to GDOT.

How the tolled, elevated express highway lanes would be laced into the Cobb Cloverleaf section of Interstate 75. Georgia Department of Transportation

The state transportation agency is in the process of collaborating with four metro Atlanta counties as well as MARTA, the ATL, and ARC to create what it calls Express Lanes Transit, or ELT, as a means of boosting regional connectivity, according to GDOT’s website.

As for the toll lanes, GDOT says a Peach Pass will be required to enter them and that pricing will be determined by traffic conditions in real time. (The heavier the congestion, the heftier the price).

Once the new lanes are built, GDOT estimates travel times will be slashed by 39 percent for anyone using the express lanes—and 8 percent for plebes still putting along in general traffic beside them.

So where does it all stand now?

In October 2019, GDOT officials announced the scheduled completion of the top-end express lanes was being bumped back from 2028 to 2032, as the agency instead focused on constructing new truck lanes on Interstate 75 between Macon and McDonough. (As another component of the Major Mobility Investment Program, or MMIP, the creation of toll lanes up Ga. Highway 400 was also moved back from a scheduled 2024 completion to 2027.)

How the top-end express lanes would meet Ga. Highway 400 near the central business districts of Sandy Springs and Dunwoody. Georgia Department of Transportation

GDOT held a series of open houses in January 2020 to gather public input on the express lanes project, and the official responses to questions and issues raised during that process can be viewed here.

More recently, GDOT revised its public-private partnership delivery model for the express lanes project in June last year. (After all, GDOT intends to partner with a company, or companies, in the private sector that would finance, design, build, operate, and maintain the express lanes—and then collect toll revenue in the future.)

“Due to this [model] change, the I-285 Top End Express Lanes’ federal environmental document and studies are currently being updated to reflect the changes,” reads GDOT’s website today.

When that happens, they’ll apparently have Cobb County in their corner.

• Images: How next development at Atlanta Braves' Truist Park will look (Urbanize Atlanta)