Over the past decade, a common complaint among Atlanta apartment dwellers feeling the pinch of escalating monthly rents is that very few new options exist without a smorgasbord of amenities they might not necessarily need. That is, the onsite coworking cafes, glass-bottomed infinity pools, and soothing dog spas that tend to attract renters with disposable income.

A new analysis of the largest 100 U.S. cities indicates those renters’ gripes in Atlanta could be justified—and that the city has emerged as something of an anomaly in terms of the ratio of luxury apartments being built versus more basic, affordable units.

Over the past decade, Atlanta has seen a surge of new apartments that promise VIP living experiences, like other fast-developing urban centers such as Seattle and Houston trying to provide more housing options in places people want to be, according to researchers with STORAGECafé, an online service for storage spaces.

In the decade between 2012 and 2021, the City of Atlanta packed on 48,200 apartments in multifamily buildings with 50 or more rental units, according to Yardi Matrix data. That amount is good for the seventh in the U.S. overall, behind New York, Seattle, and four Texas cities, according to STORAGECafé’s findings. 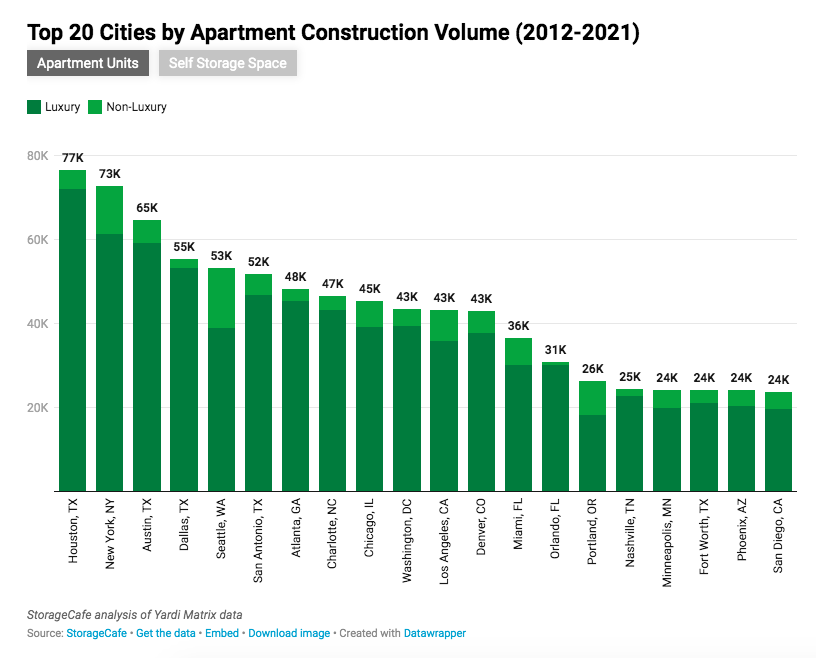 How the City of Atlanta's new apartment volume has stacked up with U.S. counterparts the past decade—and how units considered luxury vastly outweigh delivery of more basic but ostensibly affordable living options. STORAGECafé

But of those apartments built in Atlanta, 94 percent were considered luxury dwellings, offering larger interior spaces on average and “a plethora of amenities,” as researchers put it.

In other words, just 2,700 apartments delivered in new complexes across Atlanta have qualified as non-luxury since 2012.

That ranked Atlanta 12th among the 100 cities—almost all of them much smaller—in terms of the share of luxury apartments that have materialized versus non-luxury ones.

Dallas was the only larger city to rank higher/lower than Atlanta, with its 96 percent share of luxury rentals notching it at No. 7. 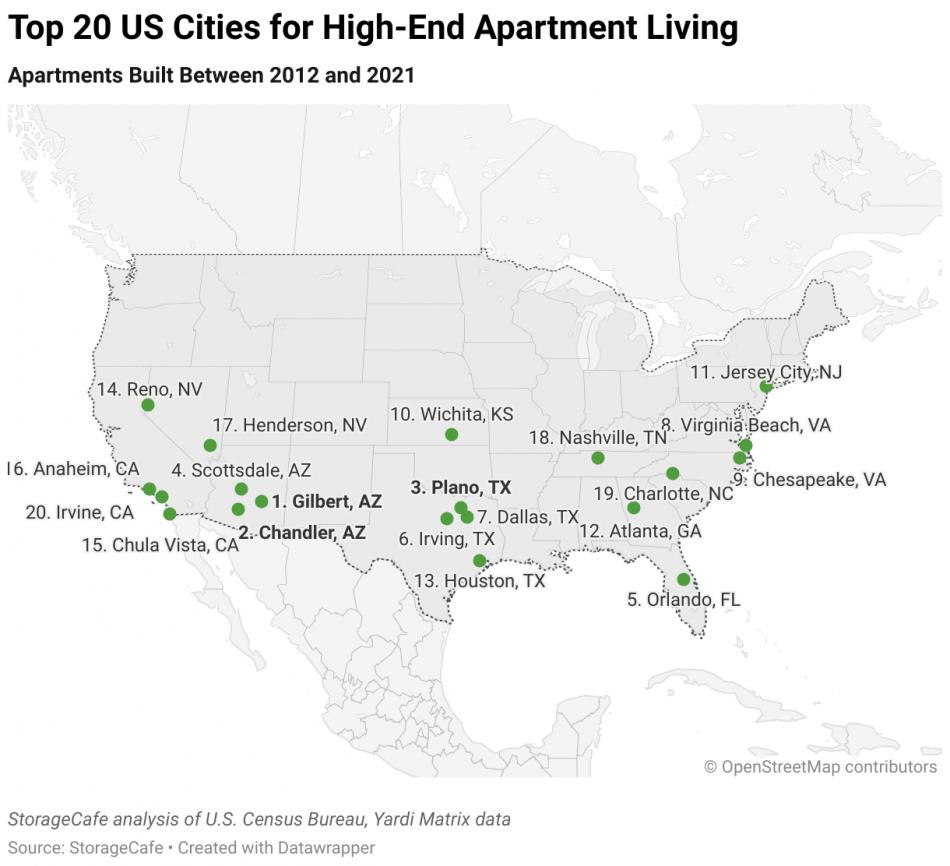 Across the U.S. overall, more than 3 million new apartments have delivered in the past decade, with 2021 being the peak year so far, when 417,000 new units—or a 12-percent bump from pandemic-rattled 2020—were delivered. A tight housing market is causing many would-be homebuyers to rent for longer and boost their expectations for what apartment communities should offer, researchers found.

On the local affordable housing front, Atlanta Mayor Andre Dickens’ administration reported in May it had already opened, or supported the development of, 1,500 affordable homes since the mayor took office in January. Dickens has vowed to preserve or build 20,000 affordable housing units in the city across two terms, if elected again.

Anecdotally, affordable housing projects have recently been announced or delivered in Reynoldstown, Grove Park, Bankhead, and Capitol View, among other neighborhoods.

• ARC: Metro Atlanta packed on another 65,000 people in past year (Urbanize Atlanta)