Midtown Union is Atlanta’s largest project delivery in 2022 by far, and as such, recent features on these pages have spotlighted the arts-themed district at night and provided a sneak peek around its hotel component, the Kimpton Shane Hotel, and its swanky new apartment stack, Mira.

The photo tour series concludes today with a look at the largest component of all: Midtown Union’s 26-story, 600,000-square-foot, glass-sheathed office tower (the biggest to deliver in Atlanta this year) that finished construction in July.

Collectively, the project consumed roughly 4 acres of what had mostly been parking lots where Spring Street meets 17th Street. 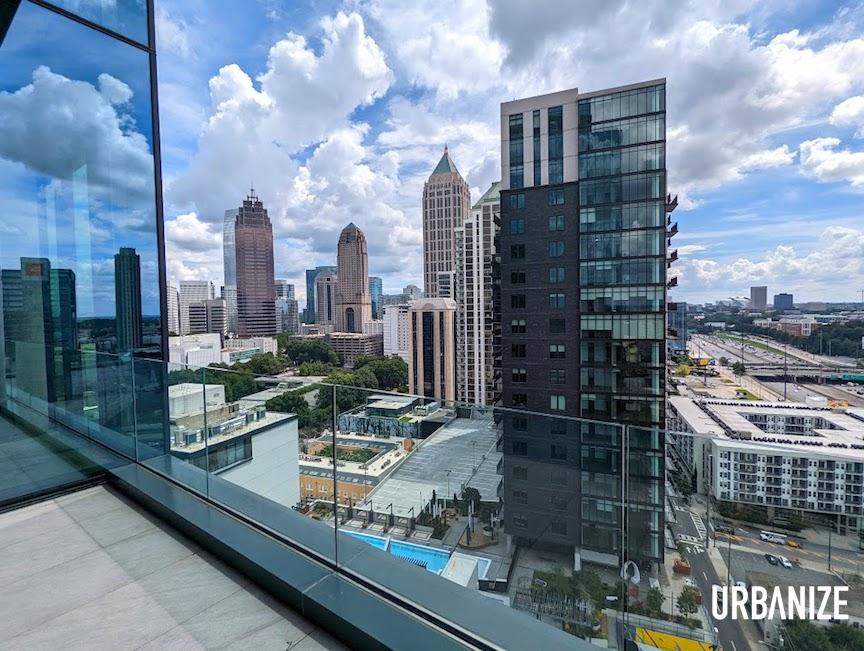 During a tour last month, John Robbins, senior managing director with Midtown Union developer Granite Properties, said the office component was 50 percent leased, with talks ongoing with several companies and an undisclosed restaurant group that Robbins says will be new to Atlanta.

Asked who’s been inquiring about available spaces, Robbins said, “It’s a little bit of both—companies that have existing presences here, growing that presence, and some bringing people from out of town. So it’s very good for the city.”

Midtown Union has taken lumps in local media for receiving a $57-million tax break from Fulton County’s development authority over the next decade; Midtown boosters have argued that was required in a competitive environment among other growing cities. Robbins says developers received a tax abatement for 50 percent of assessed value in 2023, with the abatement declining 5 percent per year for the nine years after that. He foresees companies, apartment tenants, and hotel guests making Midtown Union a destination in coming months, now that the project is finished.

“I think this time next year,” said Robbins, “this place will be going crazy.”

Tour the 26-story office stack, which stands like a modernist blue shard over the Connector, in the gallery above.