It’s been more than four years since developers unveiled concepts for a massive, multifaceted new district in Midtown that would claim sprawling parking lots across the Connector from Atlantic Station, rising from a corner site where the Great Recession had killed another, less ambitious proposal long ago.

In the years since, Midtown Union construction barreled ahead, beginning site work in October 2019, hosting a groundbreaking that December, and continuing apace through the depths of the pandemic.

As its more angular, initial designs were redone and put together, the project wasn’t without controversy, however, attracting criticism for receiving a $57-million tax break from Fulton County’s development authority over the next decade (which proponents argued was necessary in a competitive environment among cities). Urbanists also decried the project’s fortress-like parking decks as they took shape, arguing that roughly 1,900 parking spaces spread around the property aren’t necessary a block from a MARTA station.

All of that’s in the rearview now, and construction has wrapped on the block-swallowing build by Granite Properties and MetLife Investment Management in Midtown’s growing northern blocks, with three completed towers delivering 56 total stories of new development, project officials tell Urbanize Atlanta.

The residential component, Mira at Midtown Union, has people living in the building and is accepting applications for apartments that start at $1,890 monthly (one-bedrooms, 496 square feet) and soar to more than $4,600 monthly (two-bedrooms, 1,383 square feet), according to current listings.

The Cooper Carry-designed project is tied together by what the development team has described as a “pedestrian-friendly extension” of Arts Center Way, a sloped, tree-lined thoroughfare separating offices from the hotel and apartments that’s meant to be speckled with specialty shops and restaurants.

Head up to the gallery for a twilight photo tour showing Midtown Union’s light schemes, architectural variety, landscaping, and base-level interactions with surrounding streets. But first, for the sake of perspective, here’s the corner site in question in late 2018 versus today: 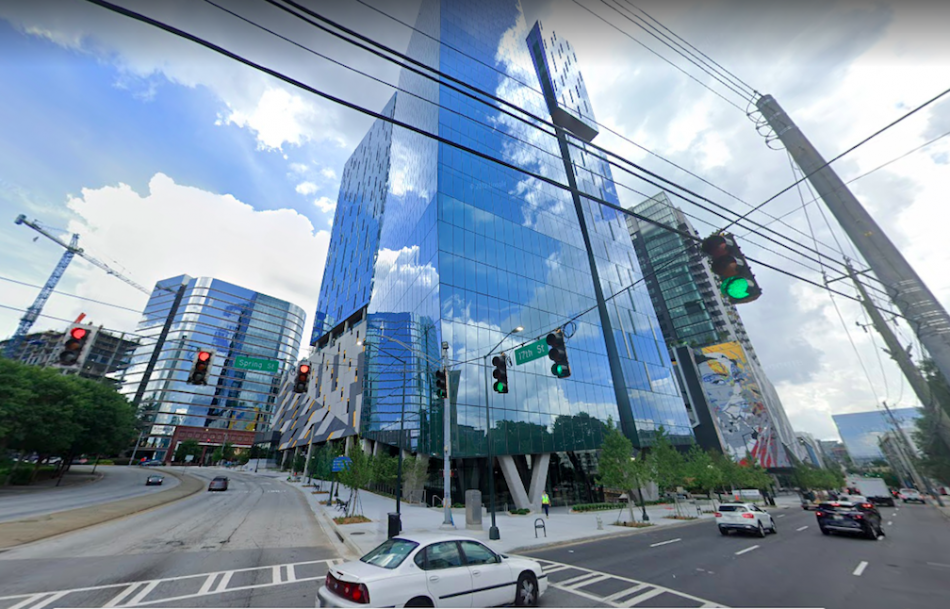