Midtown Union is Atlanta’s largest project delivery in 2022 by far, and as such, recent features on these pages have spotlighted the arts-themed district at night and provided a sneak peek around its hotel component, the Kimpton Shane Hotel.

The goal is to lend an understanding of how the Granite Properties and MetLife Investment Management development transformed a sprawling surface parking at the corner of 17th and Spring streets—and what the property could bring to a section of Midtown not exactly renowned for vibrancy or walkability before.

Next up is a tour of the residential component, the 18-story Mira at Midtown Union.

Green-lit for occupancy earlier this summer, the 355-unit Mira aims to provide tenants (willing to pay the price) with an artful, amenity-rich existence at a property they’d never necessarily have to leave. We toured just before Labor Day weekend as about 50 leases were signed and the first few dozen tenants were moving in and getting settled.

“It is a lot of people moving to Atlanta—I’d say about 70 percent of our people are from out of state,” said Mira community director Matthew Rost of RangeWater Real Estate. “A lot of Microsoft and Google people are moving down for those jobs, and people are requiring them to come back into the office, even if it’s just a hybrid. So they want to be close [to work]. A lot of California, and a lot of [tenants from] the Carolinas recently. And obviously a lot of people from New York who are able to work remotely and now fly in and out, and Atlanta being the hub of Delta, it’s easy. What they can get for their price point here, they’re like, ‘Wow.’” 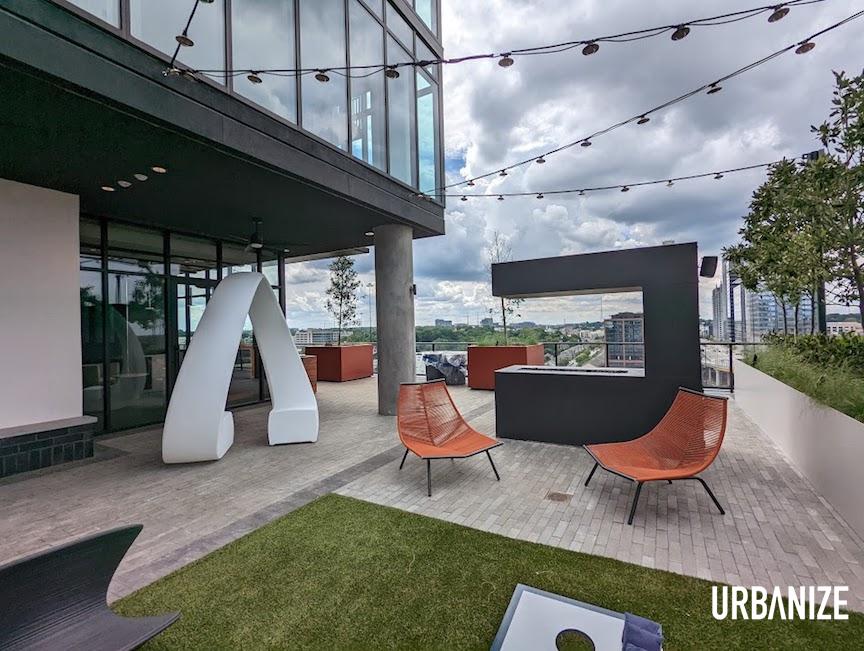 Those price points start at about $2,000 monthly now for studios with floorplans beginning at 486 square feet. The priciest pad in the building, meanwhile, commands well north of $6,000, as shown in the above gallery. Rost said the studio options in particular, with washers and dryers included, are “flying” off the shelf.

“People don’t need the space in the city anymore,” said Rost. “I call it the Manhattan of the South, because in the next 10 years, that’s what we’re going to be looking at, with walkability. They walk to Whole Foods, to Colony Square, to all the things they’d want in a city. No one wants to have to sit in their car anymore.”

Rost led the tour with Rob Bratton, vice president of development for Dallas-based StreetLights Residential, which also developed the multifamily component of the Aria community in Sandy Springs and the forthcoming, more classical-leaning The Hadley tower in Midtown. The Mira name is meant to signify looking—as if into a mirror, or at a piece of art—and help tie the building into Midtown’s surrounding Arts District. Have a look at a different kind of gallery above.