Skyrocketing building and labor costs, in conjunction with MARTA’s inexperience in creating new transit lines over the past two decades, is proving a devastating combo for customers who’d hoped to catch new rapid-bus services from places like Summerhill and Peoplestown within the next two years.

MARTA’s first new transit line since the Sandy Springs MARTA station opened in the year 2000—the Summerhill bus rapid transit route, a connection from downtown to the BeltLine’s Southside Trail—was supposed to begin construction this month.

But as the AJC reports, that work won't start until the opposite side of this winter, as an updated analysis shows the Summerhill BRT line will cost nearly 49 percent more than previously expected, bumping estimated costs from $61.5 million up to more than $91 million.

Plans had called for Atlanta’s first BRT route to launch construction in August and debut for passengers in August 2024, as funded by the $2.7-billion MORE MARTA half-penny sales tax for transit approved by voters in 2016. 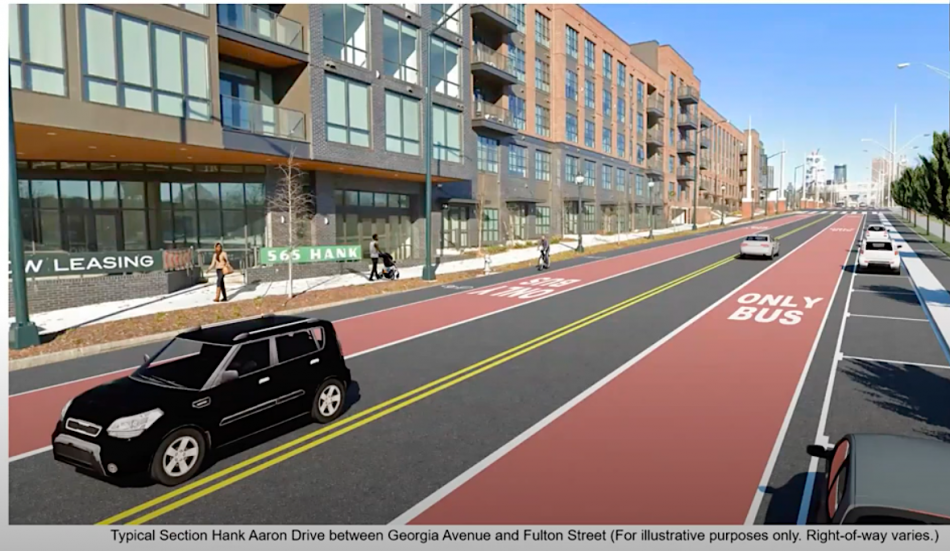 The forecast now calls for breaking ground in the spring and opening the BRT route in July 2025—with two planned stations along the route being axed to help cut costs, as the newspaper reports.

Final designs for the Summerhill BRT system were completed in July. It calls for a five-mile loop linking together the BeltLine area, Peoplestown, Summerhill, Capitol Gateway, and South Downtown neighborhoods. Fourteen stops with level boarding, positioned about 1/3-mile apart from the next, are planned throughout; though as the AJC relays, planned stations on Memorial Drive at Capitol Avenue and Trinity Avenue have been eliminated. 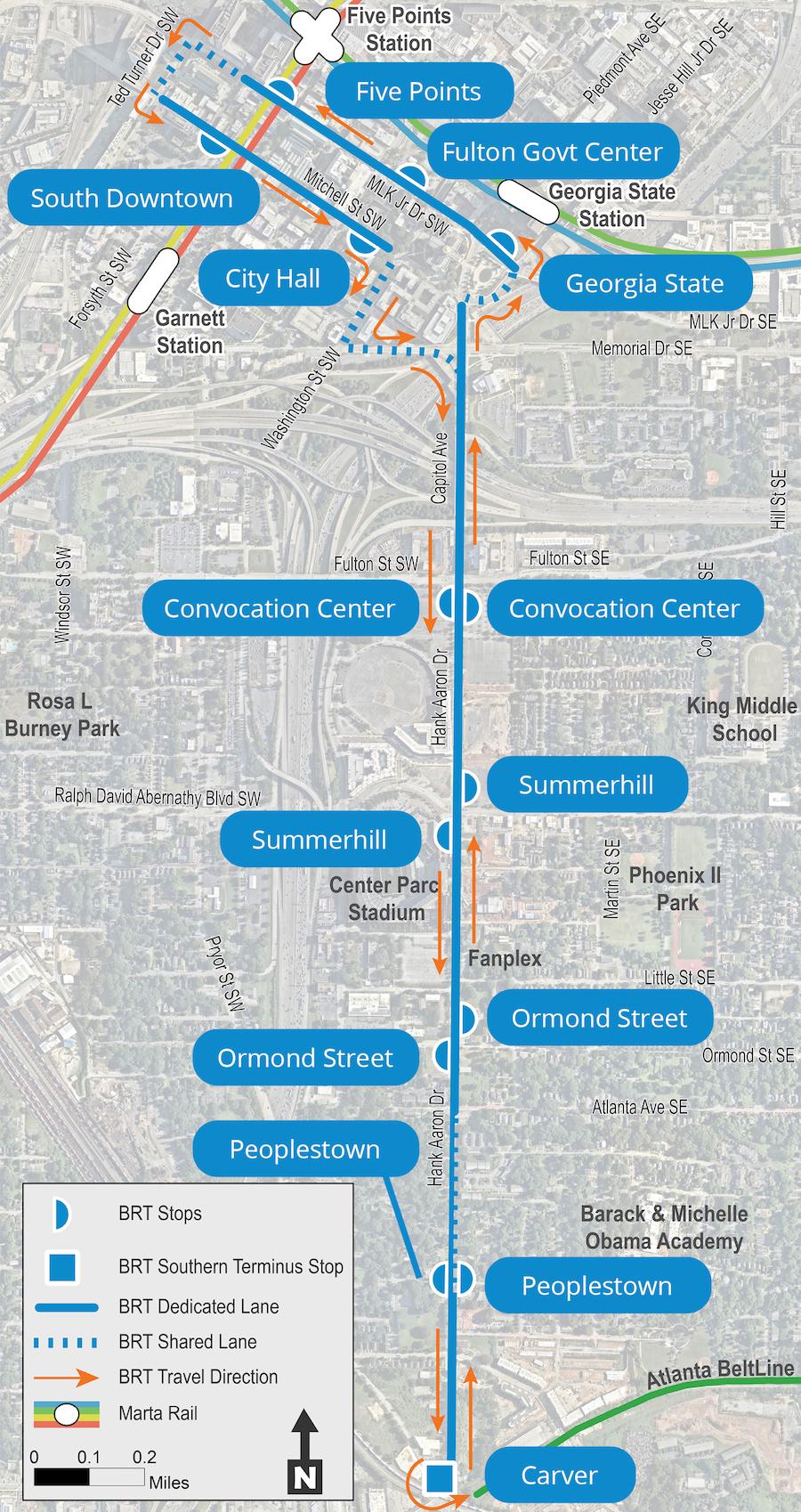 The 14-stop Summerhill BRT route revealed by MARTA in August. via MARTA

Once the line is built, buses are expected to arrive with frequencies between 10 minutes (daytime peak hours) and 20 minutes (late nights and weekend mornings). About 85 percent of the corridor will have dedicated bus-only lanes, theoretically meaning buses won’t be bogged down in traffic and travel times will be quicker.

MARTA expects 2,350 riders will use the service on a daily basis once it opens.

But the short-term forecast shows that costs for virtually every aspect of the project—labor, right-of-way acquisition, utility relocation, even the price of red paint to demarcate bus-only lanes from regular ones—have ballooned in the face of inflation, according to MARTA construction officials. Another significant cost hurdle is that, according to recent geotechnical studies, concrete in bus lanes will have to be replaced as part of the project, and not simply paved over.

The BRT line’s latest cost estimates also account for aspects that were left off the first time, such as bus-driver training and safety certifications required by the federal government.

MARTA board members during a meeting last week said the agency’s lack of experience in building new transit lines over the past two decades is one culprit in the low-ball price tag and unrealistic expectations for the Summerhill BRT service, per the AJC. Board member Robbie Ashe said the agency’s focus for the past decade has been on maintaining current operations via MARTA’s capital program and not building anew, and that efficiency needs to be improved as that focus shifts.

Bumping up costs for the city’s first BRT service by $30 million feels to board member Stacy Blakely like “we’re starting to normalize overspending,” she worried aloud. (As another cost-saving measure, MARTA plans to postpone the use of solar power for cameras, lights, and other electronics at BRT stations.) 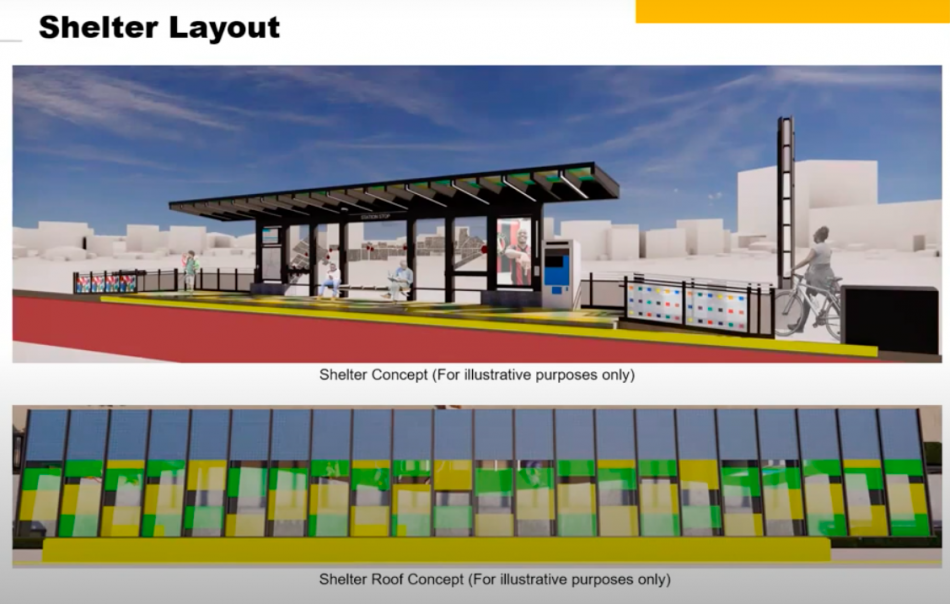 Manjeet Ranu, MARTA’s chief of capital programs, informed the board last week that higher-than-expected costs for all projects will be par for the course going forward—and that current cost estimates for other projects are “very low,” per the AJC. On a more positive note, MARTA has hired consultants to analyze cost estimates and is adding staff to tackle expansion project work in an effort to streamline schedule forecasts and cost estimates in the future.