On a busy downtown street that wends through a hotel and government district and Georgia State University’s campus, a dedicated bus lane is set to be implemented—during peak traffic hours, at least—as part of a state-level grant program.

The State Road and Tollway Authority recently awarded roughly $17 million in Georgia Transportation Infrastructure Bank loans and grants to help fund 16 transportation infrastructure projects across the state, ranging from a road realignment in East Point to a bridge replacement near Athens.

That includes $500,000 for the Atlanta Downtown Improvement District to create a bus lane on Courtland Street. 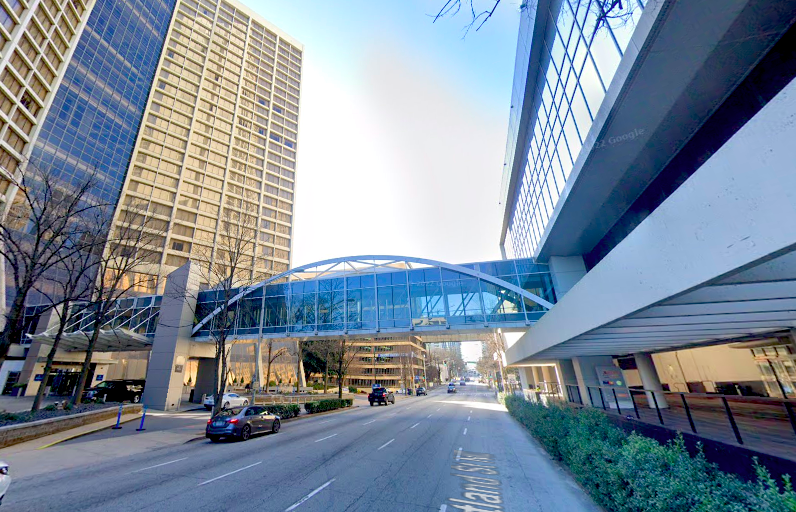 For much of that stretch, one-way Courtland Street is five lanes, before converting to a four-lane street near GSU.

Changes are expected to include re-striping and repaving, plus the addition of three bus stops. At its southern terminus, the bus route will connect to the planned Summerhill Bus Rapid Transit Lane, officials said this week.

The Courtland Street lane is expected to be used by CobbLinc, GCT, MARTA, and Xpress buses, with a goal of improving on-time performance and cutting down transit times.

Since 2010, the GTIB program has awarded roughly $182 million in grants and loans for local government and CID projects worth more than $1 billion.

Chris Tomlinson, SRTA executive director, said the most recent round of funding “kept the focus on investments in key economic engines such as downtown Atlanta, Town Center in Cobb County, [and] Athens-Clarke County,” in addition to infrastructure upgrades in some rural areas, according to a press release.

In other recent intown bus news, the AJC reports MARTA is considering scraping its plans for light rail on another crucial traffic corridor in favor of a bus rapid transit system.

For years, the transit agency has been weighing the pros and cons of light rail for a link between MARTA’s Lindbergh station and thousands of jobs at the Centers for Disease Control and Prevention and Emory University—aka, the Clifton Corridor.

MARTA is planning to decide whether to move forward with light rail or swap those plans for bus rapid transit by October, as CEO Collie Greenwood recently informed city government leaders, per the AJC.

In February, MARTA made the controversial decision to pursue BRT plans instead of a light-rail system on a six-mile stretch of Campbellton Road in Southwest Atlanta.

MARTA officials believe BRT on Campbellton Road will be significantly cheaper to build and operate—$130 million in estimated construction costs, versus $340 million for light rail—and could be installed three years sooner. The BRT option, according to the transit agency, was favored by a majority of Southwest Atlantans surveyed as part of two years of analysis and public engagement.

Critics who favored the rail option have equated those cost savings to $200 million being pulled from the community.