Much has been written lately about Atlanta’s housing market starting to lean back, if slightly, in buyers’ favor. Recent data suggest housing prices are “normalizing” after two years of historic gains, and that July doused a “5-gallon bucket of ice water” on the white-hot housing scene.

That doesn’t mean homebuying in the metro isn’t immensely more expensive than it used to be, which could be tough news for buyers, especially those new to the market, but music to the ears of longtime homeowners.

A new report by Clever, a real estate data company, weighed home pricing trends per square foot in cities across the U.S. to determine which places still get the most bang for the homebuying buck.

That means the price per square foot of Atlanta homes has exploded by nearly 70 percent in five years.

Nonetheless, when it comes to the 50 largest U.S. metros, Atlanta still ranks in the top 10—number seven—of cities offering the most square footage for the price, according to Clever’s research. (Whether that points to Atlantans favoring needlessly huge houses or being blessed to have room to breathe is in the eye of the beholder.) 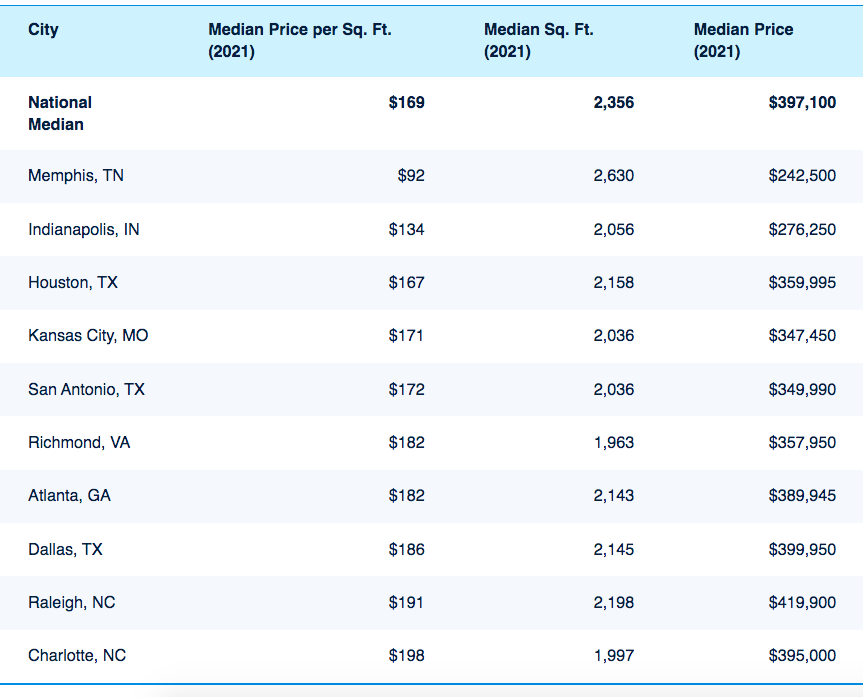 The list of U.S. metros with the "most bang for your buck" is heavy on SunBelt places, per Clever's research. Clever Real Estate

Clever examined data from the U.S. Census Bureau, U.S. Bureau of Labor Statistics, and Realtor.com through 2021 to compile its findings.

The median home size in metro Atlanta clocked in at 2,143 square feet. The median sales price, meanwhile, was $389,945 at the end of last year (though it’s climbed since), which was actually about $7,000 cheaper than average new single-family home prices across the U.S. as a whole, per the report.

Beyond Georgia, metro Memphis tallied the largest square footage per home (a whopping 2,630 square feet) and also the lowest price breakdown by far—just $92 per square foot.

On the flipside, San Jose had the highest prices per square foot ($801), joining four other California cities—half of the top 10, that is—on the list of “least bang for your buck.”

Interestingly, Clever found that Americans’ preference for larger homes—and their ability to attain them—has swelled in the past 40 years.

Meanwhile, adjusted for inflation, the median sales price for the same product has ballooned by 25 percent in the same time period.