All indications are that anyone who’s complained Midtown is losing too much of its original, low-rise charm in favor of glassy, big-bucks development could have a cause to celebrate soon. (Well, at the expense of other low-rise former houses, that is.)

The restauranteurs bought the former house—described by the Midtown Development Review Committee as “stately” and “one of the last remaining vestiges from Midtown’s early days”—early last year, after it had come to market in 2019.

Pasta da Pulcinella restaurant management and the real estate broker who represented them in the 1100 West Peachtree Street purchase haven’t responded to inquiries regarding the project. But floorplans for the commercial conversion were approved by the city’s Office of Buildings in January, and a permit for Pasta da Pulcinella to begin interior and electrical work was issued in late May. 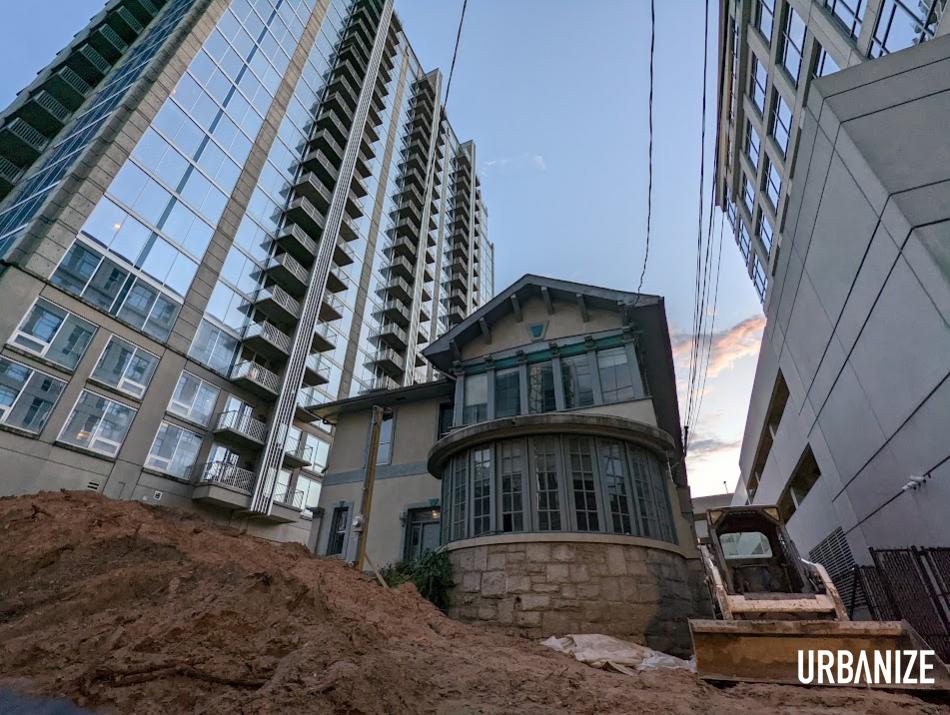 According to plans filed by BCY Architects, demolition at the two-story structure is being limited to the existing finish of interior walls, ceilings, and floors, while mechanical and electrical components are being purged. Additions will include a 545-square-foot dining deck along West Peachtree Street, a covered entry porch canopy, and an ADA-compliant exterior ramp.

Plans also call for a general refresh of the home’s exterior detailing.

Pasta da Pulcinella is currently housed in a quaint, yellow 1930s bungalow at 1123 Peachtree Walk NE, a couple of blocks east of its future home, where it relocated from an original location on Peachtree Street in 1994.

Like a handful of other buildings on its current block, the restaurant is being displaced by the second phase of Selig Development’s 1105 West Peachtree development, Midtown Exchange.

Now sandwiched between 23-story SkyHouse Midtown and Northside Hospital’s 12-story medical office building, the two-story, 5,500-square-foot house on West Peachtree had been converted to offices years ago. Its fate was cast into question in 2019 when former tenants cleared out, and marketing materials stressed redevelopment opportunities.

The property’s seller, Novare Group, had two major requirements for any potential buyer: They could not be residential developers, and anything that replaced the old house could not climb higher than 50 feet.

It’s unclear when Pasta da Pulcinella plans to open in its new space, which is situated across the street from Google’s new Midtown offices.

Plans for the restaurant facade at 1100 West Peachtree Street. BCY Architects, via City of Atlanta Office of Buildings

In a Facebook announcement in late June, the restaurant ensured its patrons and fans it “will proudly remain open for business in our current location (until further notice)!”

“We are aware of the many changes in and around our area,” the post continued, “but we plan to provide the same great experience to our guests that we have become known for over the past two decades.”

Head up to the gallery for a closer look at this Midtown relic and its planned rebirth.