Selig’s latest plans for a multi-tower development that would sprout amid some of Midtown’s most walkable and cosmopolitan blocks have come into clearer focus.

Having completed a forest of glassy high-rises in central Midtown, the veteran Atlanta real estate and development firm is moving forward with a three-building, mixed-use project called “Midtown Exchange” next to the 1105 West Peachtree project it finished last year.

The site in question involves a collection of parcels bounded by 12th Street to the south, 13th Street to the north, and Peachtree Walk to the west. Current uses on the properties include nightclubs, low-rise apartments, offices, parking lots, and restaurants.

Businesses currently operating on the Crescent Avenue side of the block will remain.

Selig’s plans were detailed this week at the first 2022 meeting of the Midtown Development Review Committee, an appointed board that vets proposals and provides recommendations to the city’s Office of Planning.

The tallest Midtown Exchange component, as designed by Rule Joy Trammell and Rubio architects, would be an apartment tower with 465 units standing 37 stories, located where Peachtree Walk meets 13th Street.

Both buildings would be arranged around a public internal courtyard, accessed where Peachtree Walk meets 12th Street, with retail spaces and lobbies at the bases.

Also included next to the plaza is a proposed 10-story parking deck with 1,608 spaces, which would serve both buildings with access points on 12th and 13th streets, according to a Midtown Alliance recap of Tuesday’s meeting.

The sloped Peachtree Walk section of the project—dotted with steel planter boxes and a bounty of plantings, per renderings—will be part of the planned Midtown Art Walk, a promenade stretching between 10th Street and Woodruff Arts Center. 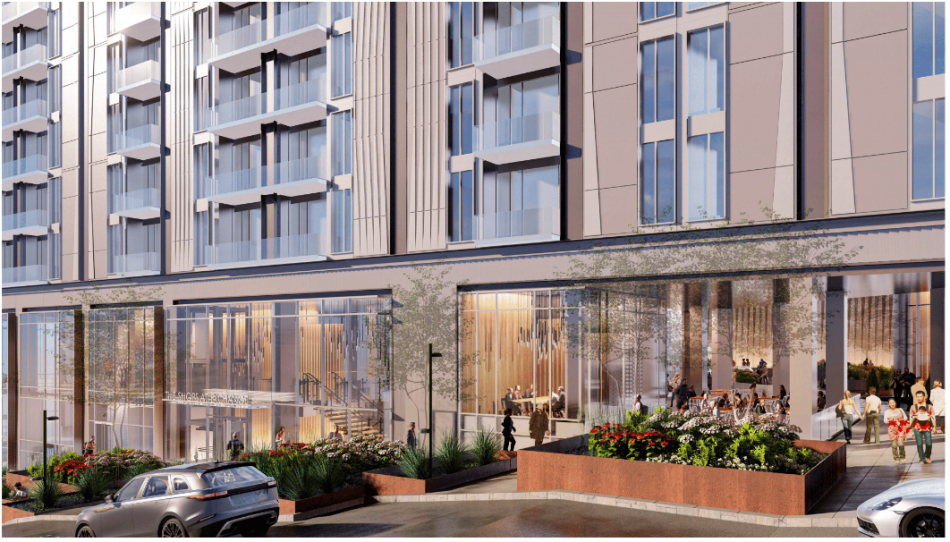 Midtown DRC members expressed concerns and shared recommendations for how Midtown Exchange could be improved, especially as relates to public engagement and parking. Some highlights from those recommendations, as summarized by Midtown Alliance:

As for next steps, Midtown DRC members offered to have a follow-up meeting with the development team as soon as feasible to address concerns. Revised plans could be approved as soon as the next DRC meeting in May, according to Midtown Alliance.

Have a closer look at where designs stand today in the gallery above.