As seen from above in a recent photo essay, site work has begun for the next component of Portman Holdings’ three-pronged Midtown development slotted between Spring Street and the downtown Connector’s roughly 47 lanes.

An official groundbreaking for the 528,000-square-foot building, which will include 8,000 square feet of retail at its base, is expected sometime this quarter. 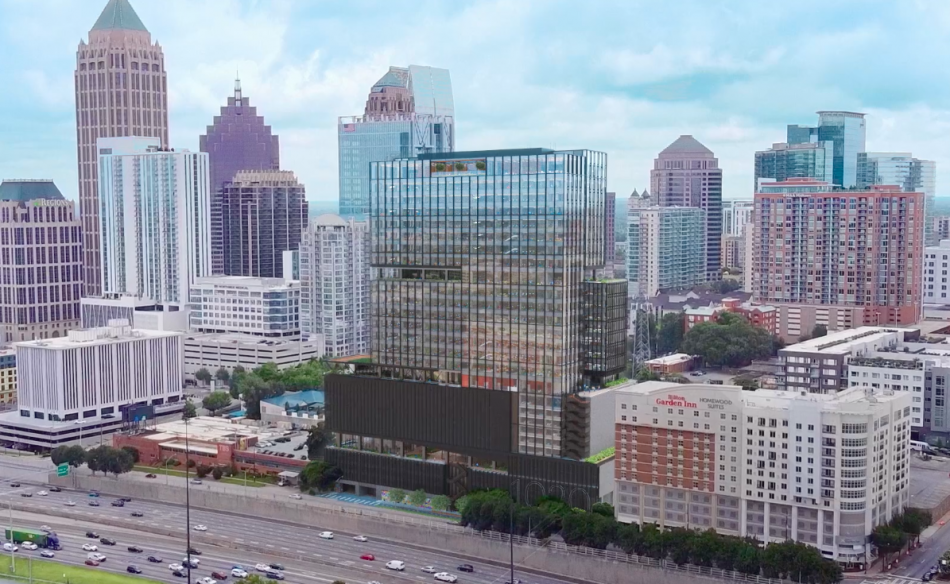 How the 1020 Spring tower will be slotted next to existing hotels and the Connector, between Spring and Williams streets. Courtesy of Portman Holdings; 1020 Spring/Vimeo; designs by KPF; architect of record, HKS

Brian Linnihan, Cushman & Wakefield’s vice chair, called 1020 Spring “the next crown jewel of the city” and noted that Midtown office demand is “4.5 times greater than supply for full floor vacancies available, led by the tech tenants fueled by Georgia Tech,” according to a media release.

The offices are part of Portman’s three-building, mixed-use development now called Spring Quarter on the 4.1-acre site. Having broken ground on the 370-unit apartment tower facet last year—positioned on one of Midtown’s highest plots of land—the overall project will consume nearly a full block once complete.

The office building will rise next to the nearly century-old Spring Hill Mortuary (H.M. Patterson House), a Philip Trammell Shutze-designed landmark that officials say will be adaptively reused and woven into Spring Quarter as a “new destination retail experience.”

Internally, the office building is expected to include an 11-story parking garage—four levels underground, seven above—with some 936 parking spaces, for a ratio of 1.8 spaces per 1,000 square feet of office space. The offices call for ceiling heights over 13 feet and floor-to-ceiling windows for maximizing skyline views. 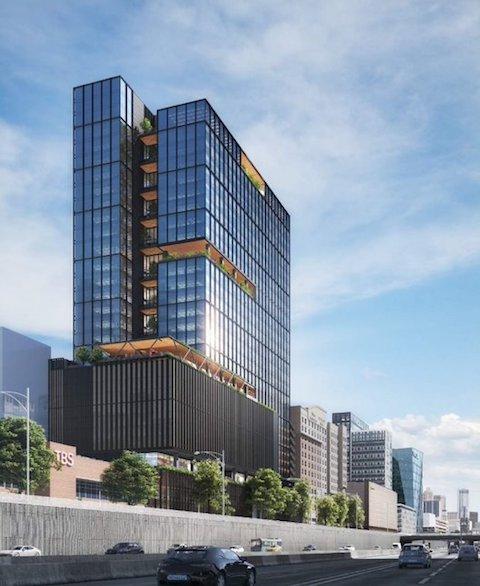 A rendering illustrating the 1020 Spring tower's relationship with the many lanes of Atlanta's downtown Connector. Courtesy of Portman Holdings

Elsewhere in the KPF-designed building, plans call for what might be Atlanta’s first new indoor pickleball court next to the indoor-outdoor fitness center, a lobby café, terraces and balconies on each floor, and an airy coworking space adjacent to a rooftop bar.

A plaza on the ground floor would feature a moss garden next to the café and what’s described as a “historic north garden” for guests.

Head up to the gallery for visual depictions of what’s to come along the Midtown business district’s western flank.