When it comes to the viability of the Midtown Connector concept, the most ambitious of three highway-capping greenspace initiatives trying to gain footing across Atlanta right now, Taylor Morison makes no bones about it: “This project is going to get done, and I’m extremely excited about it.”

Morison is chief strategy officer for a nonprofit partnership called the MCP Foundation, which unveiled the vision in early 2021 for a picturesque, contoured, and grandiose greenspace larger than Centennial Olympic Park built over the downtown Connector as means of weaving the city back together.

More than a year later, with several important meetings under its belt and prospects of federal funding on the horizon, MCP Foundation leaders are calling the Midtown highway cap “one of the most viable, shovel-ready infrastructure projects in the country,” with the potential to change Atlanta in ways not seen since the construction of Hartsfield-Jackson International Airport.

The Midtown Connector joins downtown’s Stitch proposal and Buckhead’s HUB404 in appointing leadership and seeking a piece of the federal funding pie in an era of abundant, if still prospective, infrastructure spending. Midtown’s vision, according to Morison, has garnered support among the city’s movers-and-shakers and has a clear path toward beginning the process of compiling construction dollars.

“There is A LOT of momentum for this project in Atlanta’s leadership circles right now,” Morison wrote to Urbanize Atlanta via email this week. (An unscientific poll recently conducted on these pages suggests a majority of the general public is also optimistic that downtown’s Stitch is viable, though a portion of voters felt the money and effort could be better spent elsewhere.)

Morison’s enthusiasm for the Midtown Connector is rooted in several places. 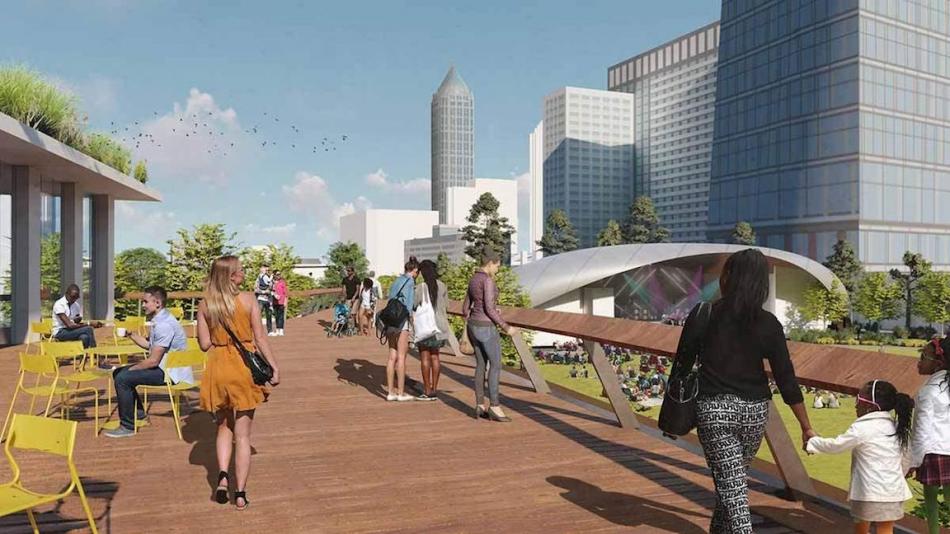 “As intended, public and stakeholder feedback from these initial concept videos paused our community engagement series,” he said, “so we could give some additional thought to… engineering, design, and scope challenges and ideas that were raised.”

Following that, the MCP Foundation put together a leadership event in January at the College Football Hall of Fame to unveil refreshed working concepts and designs for the project. (See highlights in the gallery above, or a 10-minute video compiled for that event here.) Morison said about 150 of Atlanta’s government, philanthropic, civic, and corporate leaders attended the meeting.

Input from the leadership event and the general public is helping to refine the project before another “Community Conversations” series is launched soon with tweaked plans, per Morison.

Williams is asking for $750,000 to help fund the Midtown Connector—and Warnock for $5 million. 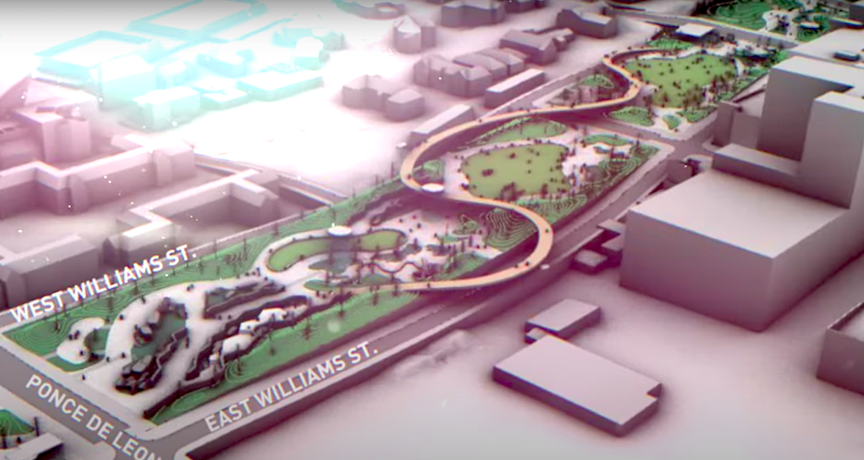 The section that would border a parking lot just north of The Varsity's original location. Courtesy of MCP Foundation

Scoring an earmark even close to $5 million would allow the MCP Foundation to complete design and engineering of the project, Morison said, to a point that would allow the process for applying for federal construction funding to begin.

“We will have moved beyond planning and design and into the construction phase,” he noted, “[which would be] a monumental milestone!”

Realistically, however, the MCP Foundation doesn’t expect an earmark that high to materialize in the budget for fiscal year 2023, which isn’t expected to be passed until sometime between October and December.

“The final amount will probably fall somewhere between $750,000 and $3.2 million—I’m earnestly predicting we end up at a $2.5-million earmark,” Morison wrote. “But the fact that we’re in both the House and the Senate bills, I’m extremely confident that we aren’t just going to fall out of the final bill.”

The Midtown Connector calls for a 25-acre park that flows with the curves of the freeway underneath, with a trail weaving across the length of it as a more human-scaled, Midtown-downtown connector. Parts of the serpentine path would be elevated, allowing users to quickly swoop over streets without having to cross them at grade.

Also in the plans: playgrounds, a dog park, cafés, a children’s garden, and an amphitheatre for local, regional, and national events.

The MCP Foundation stresses the project would fully reconnect Georgia Tech, boost existing property values, and create demand for further investment on both sides of the Connector, while also improving mobility via multimodal cross-streets, revised (or eliminated) freeway exits, and lane and shoulder reconfigurations.

The 25-acre park concept from above, running almost the length of Georgia Tech's campus. (Imagine Woodruff Park and Historic Fourth Ward Park laid over the interstate; that would still be two acres smaller than the Midtown Connector proposal.)Courtesy of MCP Foundation

Early cost estimates have ranged from $800 million to $1.2 billion—enough to finish the BeltLine at least twice over—and no specific sources of funding have been identified. Cooperation and support from business and philanthropic sectors, along with local, state, and federal governments, will be required to pull it off, projects leaders concede.

Georgia Tech, Midtown Alliance, and the Georgia Department of Transportation have all provided technical support and guidance so far, according to the MCP Foundation.

Head to the gallery above for 20 images (including new renderings) that provide a primer for the Midtown Connector’s context, functionality, and scope.