MARTA is sending out a call for artists to kick off a long-planned spruce-up at its largest and busiest station.

The transit agency seeks four qualified artists to create pieces that will be translated and fabricated into eight large mosaic installations around platforms at Five Points station.

Each wall mosaic will stand about seven feet tall and will range from 25 to 55-feet long, according to MARTA officials.

The initiative is part of MARTA’s public art program, Artbound, and will join station upgrades at Five Points that include lighting, train platform, and other aesthetic improvements, according to MARTA officials.

Above all of that, a $200-million transformation that would remove Five Points’ canopy, create a centralized hub for its 10 bus routes, and incorporate open public areas and greenspaces to reconnect downtown blocks is planned to finish by 2028. 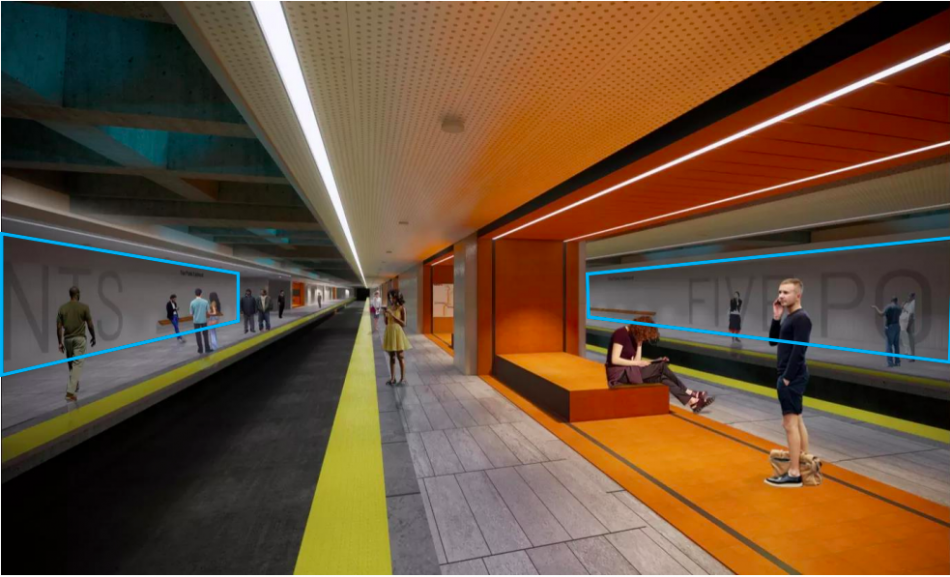 The general location of the mosaic installations (demarcated by blue lines) along Five Points platforms. Courtesy of MARTA

Criteria for the art upgrades require that all mosaics include the words “Five Points” in them.

The pieces “should create a landmark within this busy rail station and give riders a sense of pride and excitement about MARTA and the City of Atlanta,” per MARTA officials. Each artist will design a set of two mosaics to be installed on either side of North/South or East/West platforms.

The four artists picked by MARTA will create original pieces and work alongside a mosaic fabricator to reproduce them in tile. Fabricators will then create and install the works.

Design fees for artists will range between $35 and $50 per square foot, plus a 20-percent consultation fee.

The work is part of the $300-million Station Rehabilitation Program that MARTA launched a year ago to boost aesthetics and functionality across all 38 stations in the system.

All applications from artists interested in the Artbound program at Five Points are due Dec. 6.

Artists must be at least 18 years old and permitted to work in the U.S., with strong portfolios of work in two-dimensional media, per MARTA. Find more application details here.