About halfway through a tour of the L.O.A. social complex that crowns West Midtown’s $450-million The Interlock development, Mandy Slater shades her eyes from boiling afternoon sun, gives an exasperated chuckle, and says, “It’s kind of a big undertaking.”

That’s an understatement. More than four years in the making, the 38,000-square-foot L.O.A. concept—short for Leave Of Absence—that’s been billed as Atlanta’s ultimate rooftop experience (for adults, at least) is a couple of weeks from opening to the public.

Slater is cofounder and creative director of Slater Hospitality, the company behind Ponce City Market’s tourist-destination The Roof and the forthcoming spaces atop downtown’s 222 Mitchell building. As hectic last-minute details were being hashed out and final boxes unpacked, she led Urbanize Atlanta on the first media tour of a multifaceted attraction that’s not even half the size of PCM’s roof but somehow feels larger. 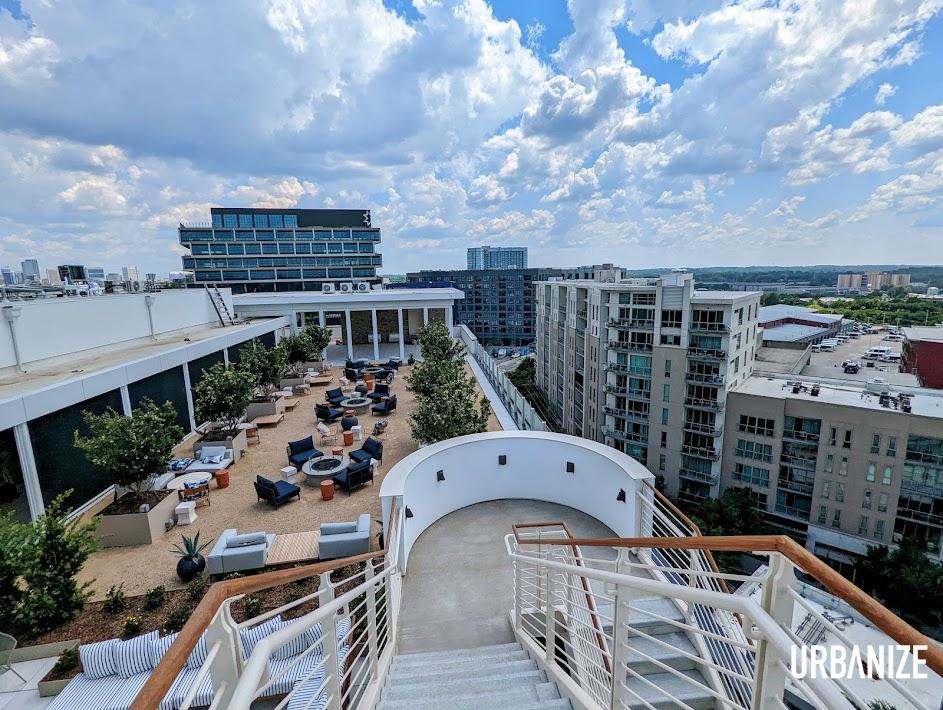 Once it opens in mid-June, L.O.A. will be free to visit but restricted to ages 21 and over at all times. Mostly it’s an evening destination, apart from The Pool zone—one of four, if you include an outdoor events pavilion—that’s open for lunch. And as Slater points out, L.O.A. took inspiration from Mykonos’ garden lounges, Monaco’s cabanas, and even cruise-ship decks to max out basically every available square foot on the SJC Ventures development’s roof.

With its shaded, breezy arcades and seating options that seem endless, L.O.A. can accommodate up to 1,000 people at once (plus the army of 200 employees that will eventually be hired). Each space has a relaxed, do-your-thing, escapist vibe, like an upscale but approachable European beach villa high over Howell Mill Road. Fresh, 360-degree perspectives on ever-changing Atlanta abound. It’s like the rooftops of Hotel Clermont, Buckhead’s former W, and a posh Midtown apartment stack in one place.

“We were inspired a lot from the places we’ve been, and any coastal town, Miami or even LA. We pulled a little from here, a little there—it’s no one thing,” says Slater. “I think maybe some places [in Atlanta] have one component or the other, but not this large, and not all at once.”

L.O.A. is accessed near The Interlock’s main parking garage entrance, and reservations won’t be necessary apart from dinners headed to the main restaurant space and for anyone who wants to guarantee a poolside spot. Slater says her team first pitched the idea of taking the entire Interlock rooftop in late 2017 and started building by the end of 2019—only to be delayed for a year by COVID-19. Construction started again in earnest in July, but supply shortages (mostly furniture and finishes) and other delays were consistent roadblocks.

“I feel like it’s turned out better than I ever imagined, really,” says Slater. “We really spent a lot of time making sure we used the space wisely. It’s beautiful, and I’m really excited about delivering a first-class space and experience to Atlanta.”

See for yourself in the gallery’s photo tour above.