The Georgia Department of Transportation isn’t mincing words: If you can avoid the section of Interstate 285 near Ga. Highway 400 for the foreseeable future, you should.

GDOT anticipates that “profound delays” and “major disruptions to daily [vehicle] commutes” will drag deep into 2023 as top-end I-285 is squeezed down to three lanes in each direction to allow for delayed bridgework to begin, according to an informational video/dire warning distributed by the transportation agency Saturday.

The lane closures and epic log-jams will happen on both sides of I-285’s intersection with Ga. Highway 400, between Roswell Road and Ashford Dunwoody Road, a main feeder for rapidly growing Perimeter cities such as Sandy Springs and Dunwoody.

GDOT is preparing to rebuild the I-285 mainline bridges over Ga. Highway 400 and other major north-south corridors in the area—work the agency says will eventually pay off with more vehicle capacity on one of the Southeast's most heavily trafficked freeways.

But the bridge replacements and lane closures won’t be finished for what GDOT is estimating to be eight months, or well into June next year.

Where I-285 is expected to be squeezed to three lanes in each direction, with closures beginning as early as this weekend. GDOT

GDOT officials said in an announcement this week that one inside I-285 eastbound lane between Roswell Road and Ashford Dunwoody Road will close as early as Saturday for bridge demolition and reconstruction.

Another lane on westbound I-285 will be subtracted roughly two weeks later. Others will soon follow.

The schedule for closing more lanes will hinge on construction crews reaching certain milestones, such as opening connecting lanes to Ga. Highway 400 and installing updated signage.

The first phase—expected to take roughly four months—will focus on reconstructing interior portions of bridges over Glenridge Drive, Ga. Highway 400, and Peachtree Dunwoody Road. At least three lanes will be open during that phase, per GDOT.

In the second phase, also expected to last four months, traffic will shift to inside lanes as crews redo exterior bridge sections. That will allow space for just three lanes max.

As the AJC notes, the second phase won’t allow room for an I-285 shoulder, so any vehicle breakdown or fender-bender could spell further carnage for commuter’s schedules. At its worst, the bridgework will translate to delays of an hour or longer for drivers who brave the area, according to GDOT.

The agency advises motorists who can’t avoid I-285 to leave their homes earlier and use navigation apps for different routes around construction. Alternately, Georgia Commute Options can help drivers seeking alternate ways of getting to work get started, per GDOT. 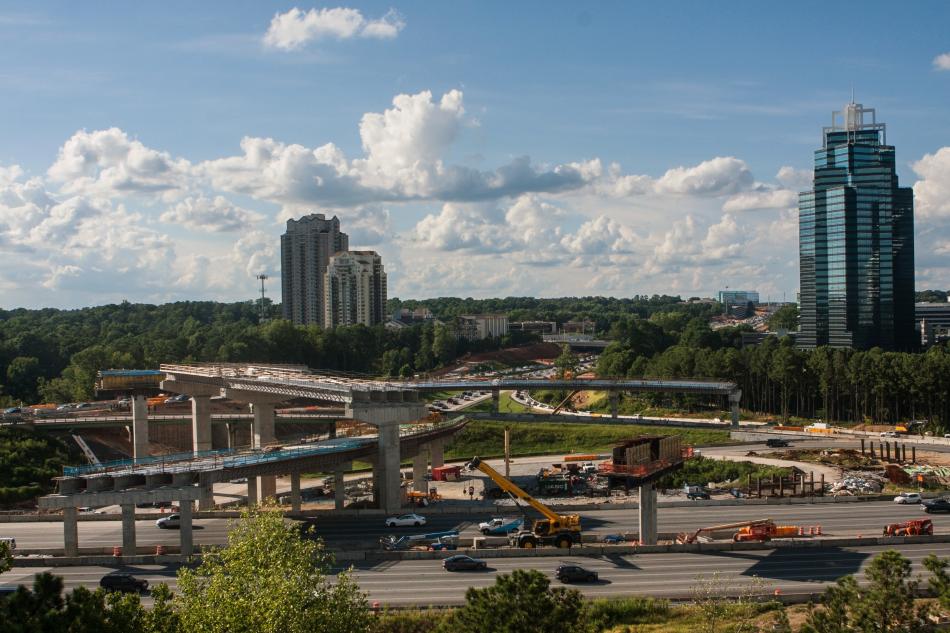 Bridge overpasses under construction at the intersection of Ga. Highway 400 and I-285 in July 2019. Shutterstock

It’s all part of GDOT’s “Transform 285/400” overhaul that began construction in 2017 and was supposed to have wrapped in summer 2020, until the scope was expanded to include new bridges on nearby connecting roads and other components. (Headaches involving bad weather, supply-chain and labor shortages related to COVID-19, and unmarked utilities have also delayed work, per the AJC.) Now, the finished interchange is expected to be only slightly smaller than Spaghetti Junction.

Beyond the infamous interchange, GDOT is planning a billion-dollar addition of about 16 miles of express lanes up Ga. Highway 400 as part of the agency’s Major Mobility Investment Program. That project will also see express lanes installed on I-285, much to the chagrin of some Urbanize readers.