Anyone with surface-parking allergies might want to medicate now.

A recent announcement that a huge pickleball and live entertainment complex has broken ground at Buford’s The Exchange @ Gwinnett also served as a reminder that we haven’t checked in on Fuqua Development’s latest big deal in a year.

For those uninitiated or new to the city, Fuqua Development has a track record of being one of Atlanta’s more controversial developers.

In addition to completing projects at places like The Battery, Jeff Fuqua, head of Fuqua Development, has ruffled the feathers of intown urbanists and neighbors from Decatur to Home Park during the city’s long, ongoing development cycle. And before that, too. 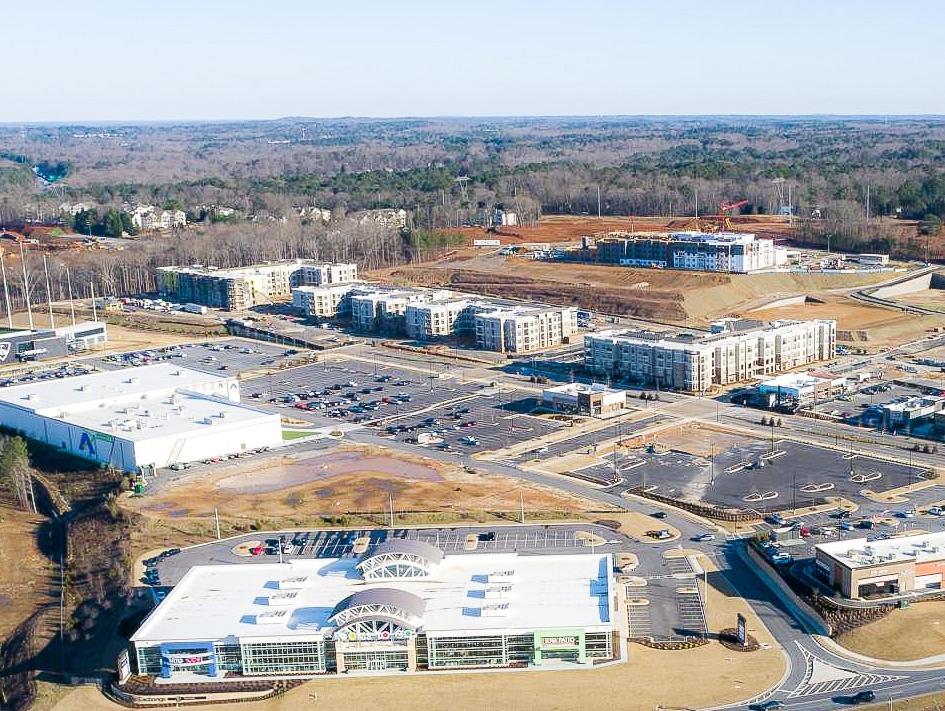 The view from I-85, over Rooms To Go, in January. The Exchange @ Gwinnett/FB

Fuqua’s greatest hits, beyond classics like Midtown Place and Edgewood Retail District, include a suburban-style node with a towering self-storage facility next to Atlantic Station; a proposed Walmart in historic Grant Park (later switched to Kroger, aka “Krobar”); a parking-heavy, mixed-use hub at the doorstep of Piedmont Park eventually killed by the BeltLine and Invest Atlanta; and to a less-offensive degree, Madison Yards in Reynoldstown.

Just before the pandemic, Fuqua again turned toward the suburbs, embarking on a $350-million, mixed-use venture across 106 acres in Buford—for context, six Madison Yards would fit there, and then some—that was said to rival Forsyth County’s Halcyon and Alpharetta’s Avalon. Only more shopping center-y.

Located next to Interstate 85, just south of the Mall of Georgia, The Exchange @ Gwinnett project marked milestones in 2021 by opening the county’s first Topgolf, featuring multiple levels of bars and eateries and 72 bays, and an Andretti Indoor Karting and Games facility next to a parking lot befitting (almost) Indy 500 time trials. 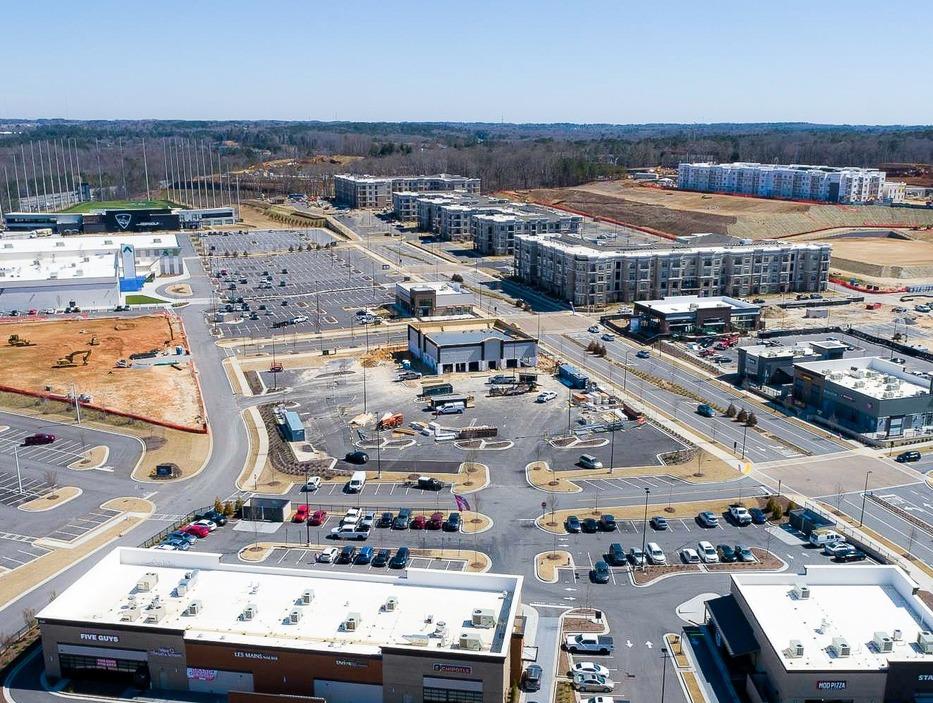 The next big thing, as announced earlier this month, is a Competitive Social Ventures venue called Pickle & Social, which will consume a whopping 4 and ½ acres. Promotional materials say the complex will be a highlight of an overall project described as both “urban” and a “landmark district.”

With the pickleball mecca, expect eight, pro-grade indoor and outdoor courts next to a 7,000-square-foot restaurant, a rooftop bar, 26 professional cornhole lanes, an outdoor biergarten, plus a bar, big stage, and volleyball courts at something called Pickle Beach™.

It’s all expected to open next spring at the northeast corner of I-85 and Ga. Highway 20.

In a prepared statement, Fuqua himself called the pickleball emporium “the ultimate addition to the thriving tenant mix” at the Exchange, which includes shops and some 22 restaurants, Sprouts Farmer’s Market, and eventually 1,000 places to live, ranging from family-sized townhomes to flats for seniors.

Speaking of, the first residential component to open, The Heights at Exchange, recently began leasing efforts. One-bedroom options with 722 square feet start at $1,575 per month.

The 55+ luxury living component, Outlook Gwinnett, is scheduled to come online in early 2023. Another phase of market-rate flats and townhomes is expected to open later this year.

Some 3,000 people (and about 70 retailers) are predicted to call The Exchange home eventually.

Also open is a roster of tenants that hardly surprise for a Fuqua build: Chipotle, Les Mains Nail Bar, Starbucks, Thrive Affordable Vet Care, Five Guys, The Halal Guys, Jersey Mike’s, Wingstop, Planet Smoothie, and what’s billed as the largest Rooms to Go in the Southeast. Elsewhere, Central City Tavern is expected to open next to a planned food hall.

Fuqua has described the Gwinnett venture as an “urban hamlet”—that is, a suburban development with a stronger sense of place. Nonetheless, The Exchange is predicted to generate 36,000 vehicle trips in and out per day—a number roughly on par with the sprawling mall up the road.

Like Madison Yards, the project was designed by Alpharetta-based Pieper O'Brien Herr Architects. Have a look at how things are coming together, and where they’re going, in the gallery above.