On Monday, the sight of orange construction fencing and heavy equipment gnawing away at brush was a cause for Atlanta urbanists, bike commuters, and outdoor enthusiasts to pop bubbly.

The construction activity was a sign the full build-out of the Eastside Trolley Trail has finally begun—after being on the proverbial drawing board for nearly 30 years.

As PATH Foundation officials had predicted last month, Excellere Construction crews began work this week on a project that promises to more safely usher Atlantans in eastside neighborhoods south of DeKalb Avenue to the BeltLine and back.

The starting point for construction is a quiet stretch of Woodbine Avenue between Coan Park and Gilliam Park in Kirkwood—a gap between existing trail sections near the Pullman Yard redevelopment. 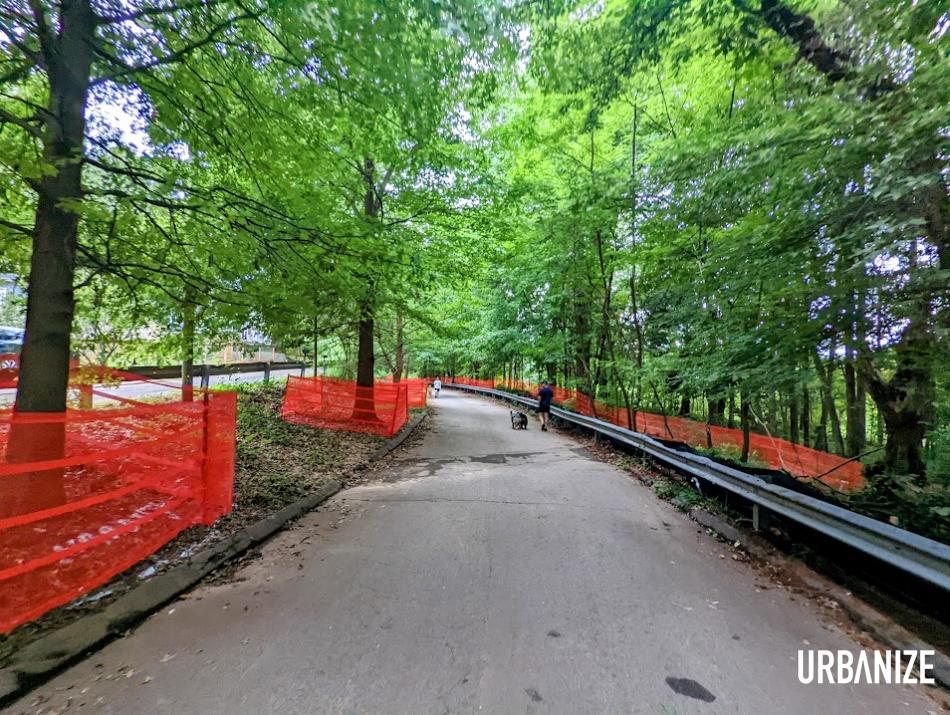 For anyone coming from the BeltLine, the Eastside Trolley Trail will start on-street in Reynoldstown near the Eastside Trail, run eastward through Edgewood, and connect with existing PATH sections that were installed prior to the 1996 Olympics as the project's first phase. The finished project will provide a nearly two-mile route for non-drivers from the doorstep of Kirkwood’s downtown back to the BeltLine.

Where the trail crosses busy Moreland Avenue, the Georgia Department of Transportation plans to install a dedicated signal for pedestrians and cyclists. Sections of the trail in Reynoldstown will remain on-street, and elsewhere the new trail will be protected with grass strips where possible. Along Arkwright Place in Edgewood, designs have called for implementing the trail in front of popular El Tesoro restaurant, with on-street parking installed just to the east toward Kirkwood, PATH officials said last year.

The Eastside Trolley Trail made the cut for the Moving Atlanta Forward infrastructure project list approved by voters during May’s primary election. Its $2.85 million in funding is part of a $28-million package for the PATH Foundation that agency leaders have called unprecedented. PATH expects to channel that money into 11 projects, or roughly 10 miles of new trails across the city.

We’ve asked PATH Foundation officials for information on what Atlantans can expect in terms of Eastside Trolley Trail construction and closures in coming weeks and months. We’ll update this story with any additional details that come.

UPDATE, 3:43 p.m., July 12: Pellegrini, the PATH Foundation project manager, sends the additional context related to the trail project, which is now estimated to be complete earlier than previously expected—by next spring, instead of summer 2023:

"Excellere Construction [is] currently working on establishing their silt fence and tree protection through out the corridor," Pellegrini wrote via email. "It is my understanding that Excellere will be focusing on the Woodbine Avenue section that runs between Hosea Williams and Wade [Avenue] at this time. PATH has placed flyers in the adjacent the neighbor’s mailboxes and will be placing construction signs to help notify the neighbors of our construction. We are getting positive feedback and support for this trail project as most neighbors appear to understand the construction challenges the contractor is facing."

In the meantime, have a look at the beginnings of trail progress and images with more context in the gallery.