The conversion of Doraville’s old GM plant site into one of metro Atlanta’s largest film studios is ahead of schedule and well on its way to becoming something akin to ITP’s version of a Hollywood backlot.

That’s the message Gray Television, an Atlanta-based company considered one of the nation’s largest owners of broadcast TV stations, has been imparting to local media in recent weeks as the first phase of the massive Assembly Atlanta project rises across 135 acres neighbored by I-285, MARTA’s Gold Line, and urbanizing Peachtree Road.

A source of jobs and Doraville pride for more than 60 years, GM's factory stopped cranking out Oldsmobiles, Chevys, Buicks, and Pontiacs when it shuttered in 2008. Gray bought the property from Atlanta developer Integral Group last year, acquired the site’s existing Third Rail Studios a few months later, and then broke ground in May on what’s expected to be roughly 20 Assembly Atlanta soundstages. Gray has worked out a deal with film and television producer NBCUniversal to lease spaces across the sprawling campus, alongside Gray’s own Swirl Films.

As our recent drone photography illustrates, it’s a huge palette to work with when creating new worlds—both make-believe and mixed-use—especially as ITP sites go. 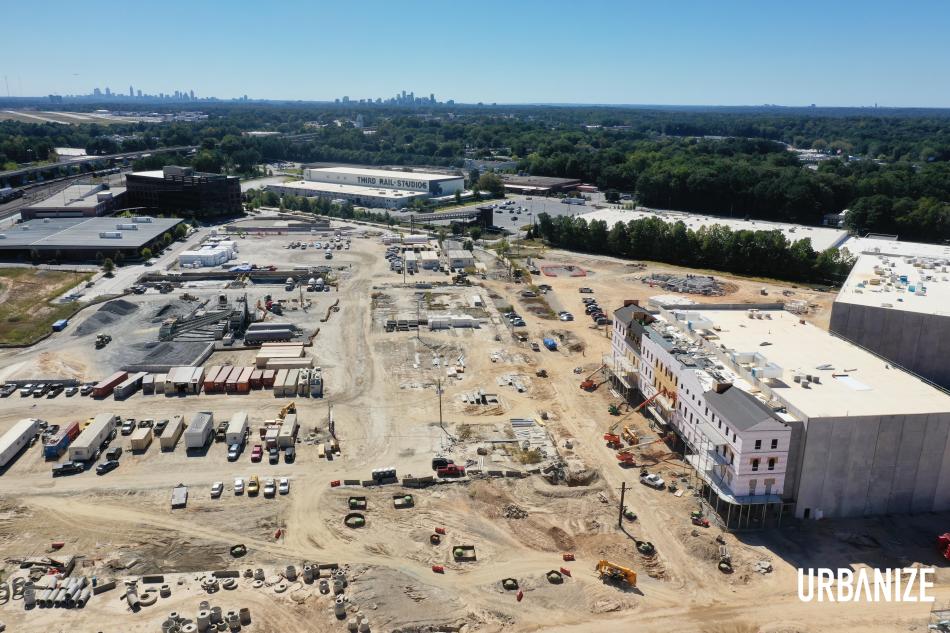 How Third Rail Studios, which opened in 2015, relates to the construction site. The skylines of Buckhead (right) and downtown/Midtown poke up from the horizon.

The first HGOR-designed phase alone is expected to cost $305 million and include more than 1 million square feet of film-production space (from warehouses to dining halls and bungalows for private production) across 53 acres.

According to Bisnow Atlanta, backlots taking shape with distinctive facades have been designed to mimic brownstones in New York City, a grittier section with exposed fire escapes called “Tribeca,” a fancier district that will stand in for streets in European capital cities, and another area meant to be the French Quarter in New Orleans. That makes the concept sound like a beefier, north ITP answer to Tyler Perry Studios, which counts everything from a faux White House to a prison yard. 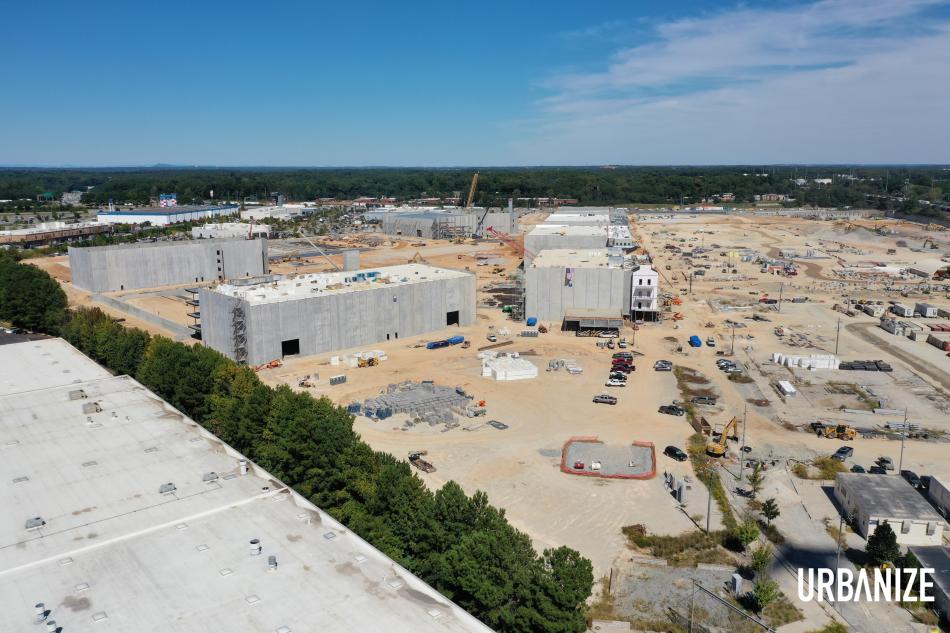 View to the north and Interstate 285, with Doraville and downtown Chamblee at left.

Other sections in Assembly Atlanta’s phase one will feature a 4-acre public park, a 2-acre central lawn that doubles as stormwater drainage, two (real) Doraville police precincts, and some two miles of streetscapes, as Bisnow reports

It’s all situated about 11 miles north of Midtown, set to open in June next year. 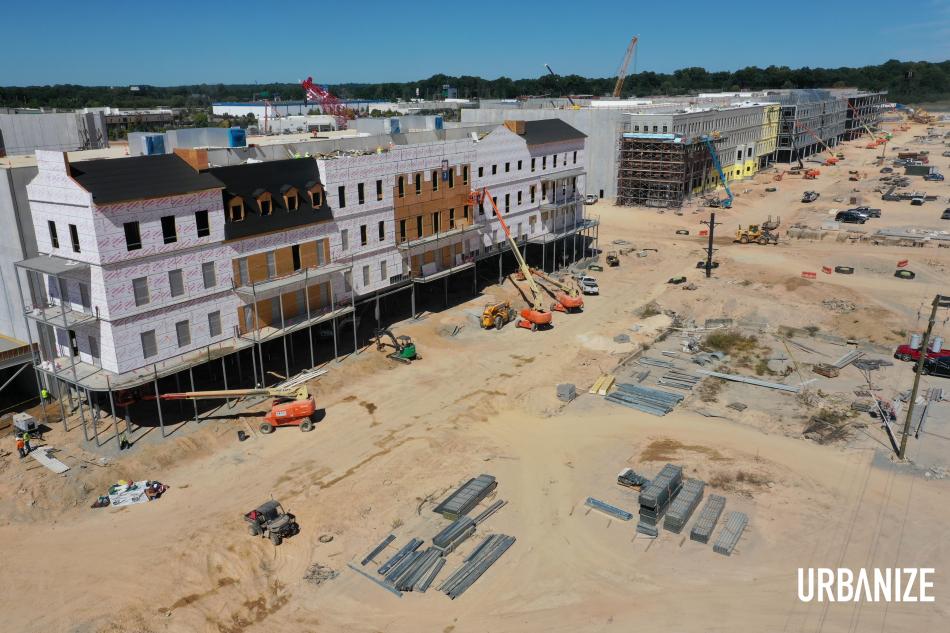 Howell told the AJC in August the project has skirted pandemic-related supply issues because all required steel was purchased in 2021, and Gray’s contractor built a temporary concrete plant on site to keep that material flowing. Some 83 acres of GM’s former concrete floors had to be broken up—a process that took a year—which was crushed and reused as fill for the bases of buildings taking shape now. 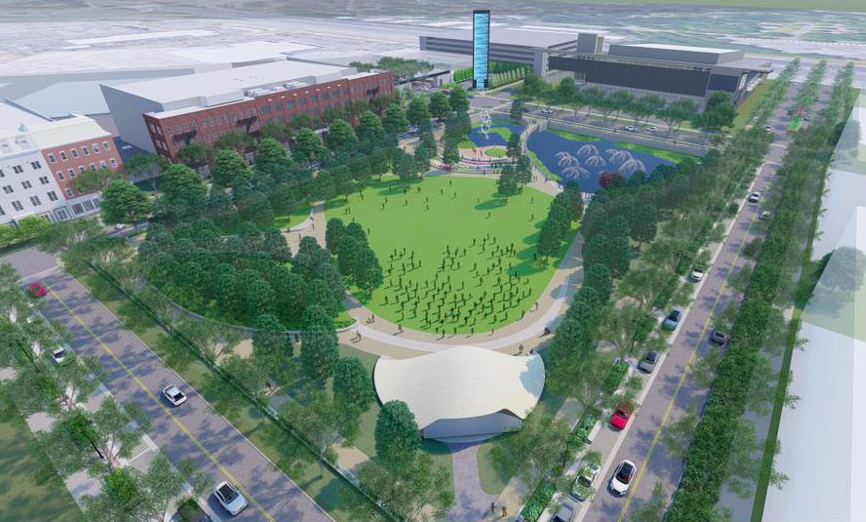 Howell boasted to Bisnow that all construction materials, labor, designers, and other products (like much of the eventual talent that will work at Assembly Atlanta) was sourced from Georgia, bolstering the notion the state can sustain itself in the entertainment industry.

Once the studios are established, Gray plans to develop more traditional mixed-use facets in Doraville. Plans call for 120 condos and townhomes, 800 apartments, 250,000 square feet of retail, two hotels with 350 rooms combined, and about 1 million square feet of offices. Also in the mix: a nondenominational wedding chapel, 5,000-seat civic arena, and conference center, checking basically every land-use box outside of a sports arena and waterpark.

Head up to the gallery for further proof that Y'allywood—an entire industry juiced by Georgia's tax credits for movie and TV production—is real.

• Dead Kmart, a thorn in Doraville's side, makes way for acres of mixed-use (Urbanize Atlanta)