Boosted by revenue from a new tax and recent philanthropic contributions totaling more than $100 million, the Atlanta BeltLine appears to be carrying the unparalleled construction-progress momentum from 2021 through the first half of this year.

As part of its June status update, Atlanta BeltLine Inc. officials say the 22-mile urban reclamation project has entered “an unprecedented time of progress,” with construction or new design initiatives underway on trail segments all over town.

That includes actual heavy equipment making an appearance on raw sections of the highly anticipated Southside Trail, the launch of survey work on the complex Northwest Trail into Buckhead, and even early plans for a new bridge spanning an eastside interstate that would be off-limits to cars.

Below are a few highlights we’re most excited about, as this “unprecedented” era unfolds: 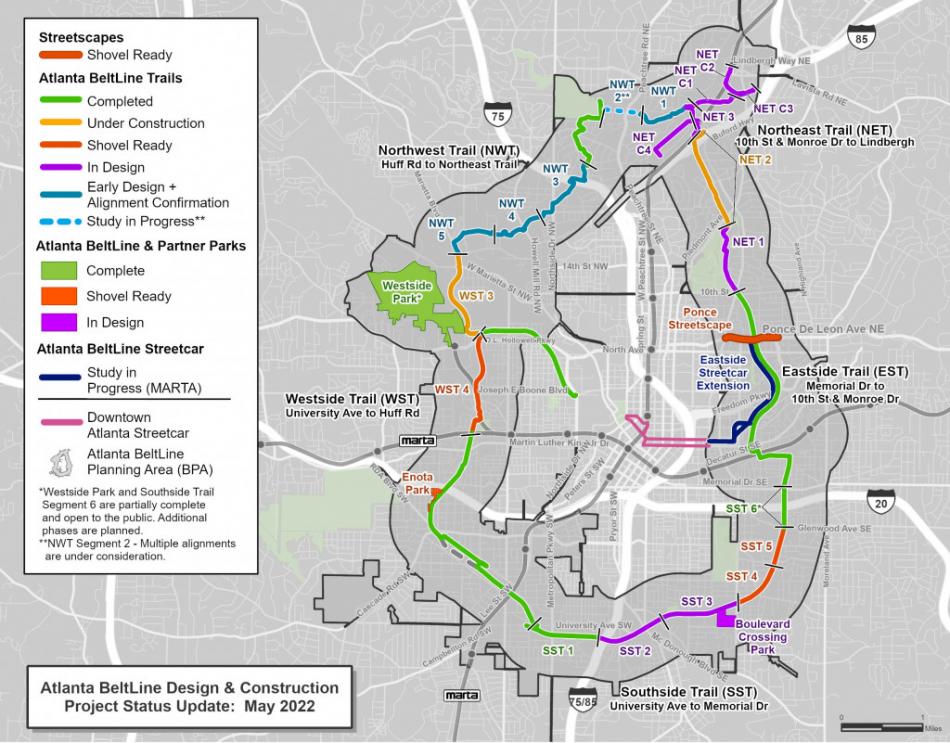 What: The bumpy, ragged, but handy interim section—Segment 2—of the Northeast Trail that runs behind Ansley Mall is now off-limits to the public. Light-pole installation has commenced.

Why: The Northeast Trail is being expanded into a 1.2-mile link between the northern edge of Piedmont Park, under Interstate 85, and into the Armour district, near SweetWater Brewing Company. It will include lighting, landscaping, security cameras, and multiple street access points. 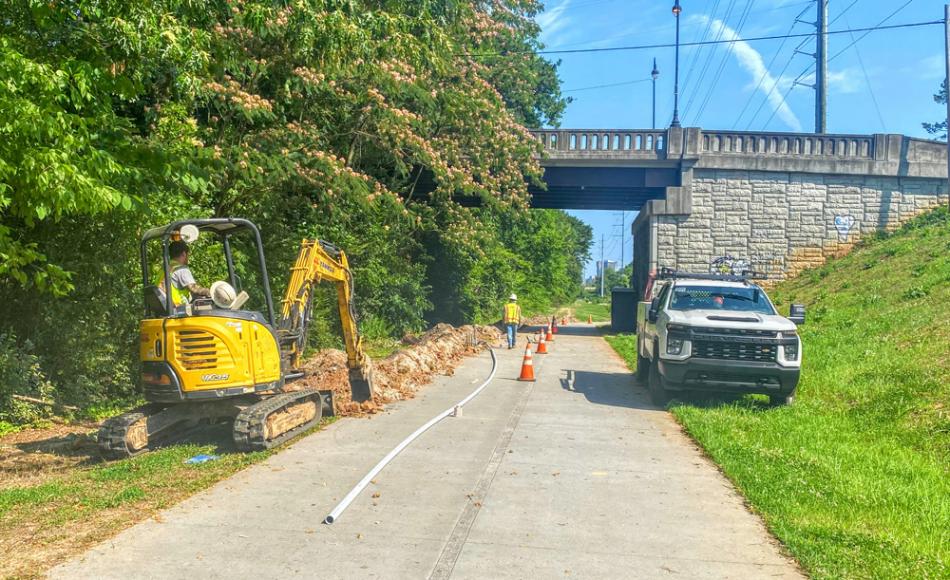 BeltLine officials say 126 trees will have to be removed, beginning this month, to accommodate the trail alignment; most of those are invasive species, per the agency, and 1,255 trees are being planted to replace them. North of Ansley Mall, the trail segment might be cluttered with construction crews and dirt, but it remains open for now.

When: Construction on the Northeast Trail segment is scheduled to last through summer 2023, with landscaping work continuing into the fall.

What: Temporary closure signs and the presence of heavy machinery means construction on the Southside Trail’s next leg is drawing close, per BeltLine officials.

Why: Segments 4 and 5, the link between Glenwood Park down to Boulevard, has entered the shovel-ready phase. BeltLine officials expect to let the bid for construction after brownfield remediation wraps and two fiber relocation projects finish this summer.

When: Fiber relocation is expected to finish in August, and at last check, BeltLine officials were optimistic the Southside Trail’s Segment 3 will break ground this year and open sometime in 2023, looping neighborhoods like Chosewood Park and Boulevard Heights into the trail network. That work will include replacement of the United Avenue bridge, an annoying gap for trail users now.

What: In other (surprising!) Southside Trail news, BeltLine officials say they expect to solicit an engineering team this fall for designing a permanent solution to getting trail users across Interstate 20 on Bill Kennedy Way. (Those concrete barriers, after all, are temporary.) The project’s scope will include “required modifications to adjacent trails north and south for an improved trail experience.”

When: The bridge section is considered Segment 6, but no timeline for construction has been specified.

What: The good news for Westside inhabitants is that BeltLine leadership has permits in hand and has finalized contracts with Norfolk Southern to complete the Westside Trail’s Segment 3. That’ll provide a link from downtown—via the Westside BeltLine Connector trail—around to the burgeoning Huff Road corridor.

Why: Almost all of the 1.2-mile Segment 3 has been finished and open to exercisers and commuters for months, but a short section over a railroad corridor on Marietta Boulevard was the missing piece.

When: The trail work over the Marietta Boulevard bridge is expected to finish in September.

What: In other Westside Trail news, the BeltLine reports the 1.3-mile Segment 4 has achieved shovel-ready status following the completion of most design work. This will be the link between the Westside Trail’s current end in Washington Park up to Segment 3, completing roughly six miles of contiguous BeltLine loop west and south of downtown.

When: The BeltLine is working through real estate transactions and permitting in hopes of bidding out Segment 4 work late this year or early next.

What: Last but not least, ABI reports that survey work began in June on three segments of the tricky Northwest Trail corridor that will branch from industrial areas west of Midtown into Buckhead.

Those pieces undergoing surveys now include Segment 5 (from Huff Road to English Street), Segment 3 (Hemphill Waterworks to Tanyard Creek Park), and on the far north side, Segment 1 (between Peachtree Park Apartments and Kinsey Court).

When: No construction outlook has been provided.

What: Also in Buckhead, CSX train company’s efforts to replace a wooden railroad trestle at Tanyard Creek Park are expected to last through the remainder of 2022. That work has closed a section of the BeltLine’s Northside Trail, and plans for the trestle’s replacement structure promise an aesthetic downgrade.

The BeltLine’s 25-year redevelopment plan—like the project’s dedicated Tax Allocation District, or TOD—is scheduled to end by the final quarter of 2030. The goal is to reconnect 45 neighborhoods across the city and provide viable transportation and recreation alternatives, new jobs, and affordable housing.

BeltLine leaders have described 2021 as a banner year, with new trail segments opening across Atlanta, from behind Ansley Mall, to English Avenue, and the Pittsburgh neighborhood south of downtown.