The Atlanta BeltLine’s growth spurt is officially continuing between Piedmont Park and Buckhead.

As work nears completion on a new trail section near Westside Park, another BeltLine segment has launched construction on the flipside of town in recent weeks. Once finished, the Northeast Trail promises to be a useful, off-street link between Midtown and the Lindbergh (aka Uptown) area, in addition to places like the Cheshire Bridge Road corridor.

That trail’s Segment 2, as it’s called, will extend the current paved multi-use Northeast Trail in both directions, including a connection into Piedmont Park at Westminster Drive, near the Atlanta Botanical Garden, at the southern terminus.

On the opposite end, the trail will be extended to Mayson Street in an industrial district that's blossomed with offices and eateries just north of Interstate 85. 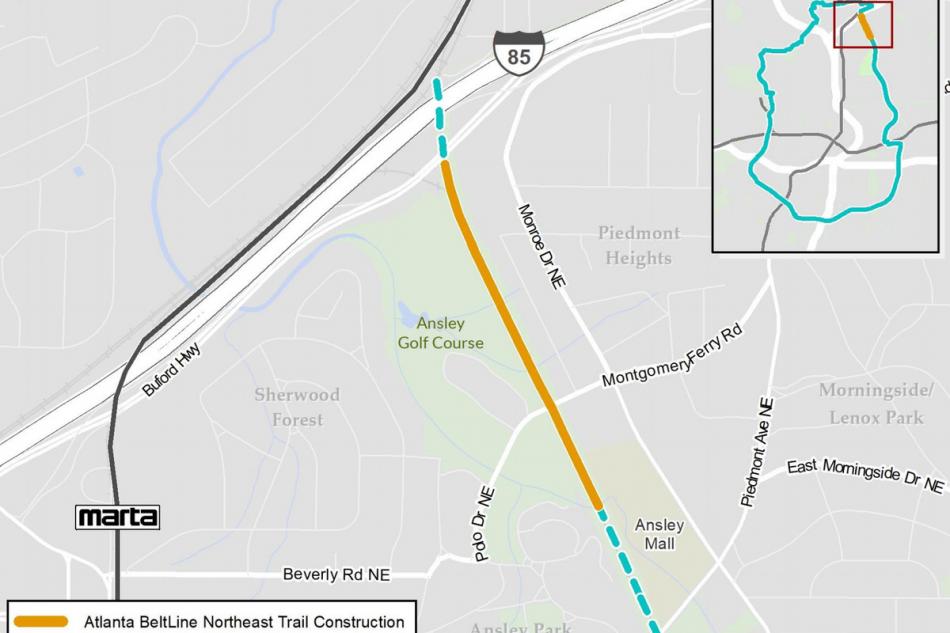 The initial completed section of the BeltLine's Northeast Trail, stretching from Ansley Mall to almost Interstate 85. The next phase of work is shown in dotted blue. Atlanta BeltLine Inc.

Along the way, it’ll pass Ansley Mall, a new ramp that’s being installed for a connection to Piedmont Avenue, Ansley Golf Course, and a tunnel under I-85.

According to BeltLine officials, Segment 2 construction started in April around a timber bridge that crosses a creek near Ansley Mall. The unpaved trail is expected to close to the public in that area in coming days.

Next will come arborist and erosion control work, followed by major construction, per the BeltLine.

Once Segment 2 is finished, the Northside Trail will span 1.2 miles, with all lighting, landscaping, and security cameras installed that the corridor currently lacks. With its multiple street access points, it’s expected to function as a protected link into Midtown, via Piedmont Park, from neighborhoods such as Piedmont Heights and the Armour district, near SweetWater Brewing Company’s longtime home.

In the gallery above, see where the corridor stands today—and a detailed preview of what’s to come.