Hundreds of more apartment units have topped out in a formerly industrial section of Atlanta that’s been unrecognizably transformed as a hot zone for multifamily development over the past decade.

The six-story building will house 320 units on 2.9 acres at 652 Angier Avenue, according to building permits. It’s situated along the western edge of Historic Fourth Ward Park, near the main playground space, where Trammell Crow razed five commercial buildings and warehouses last year. 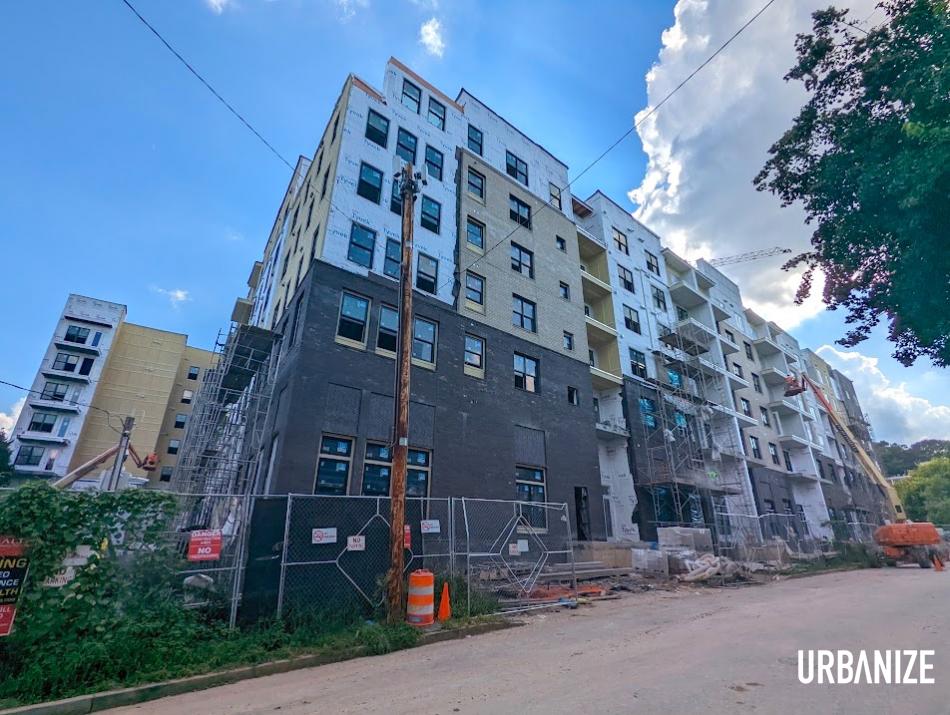 Building permit records indicate a corner parcel of the lot owned by Atlanta’s Department of Parks and Recreation will be developed as public parkland, facing the current park at the northeast corner of the site. 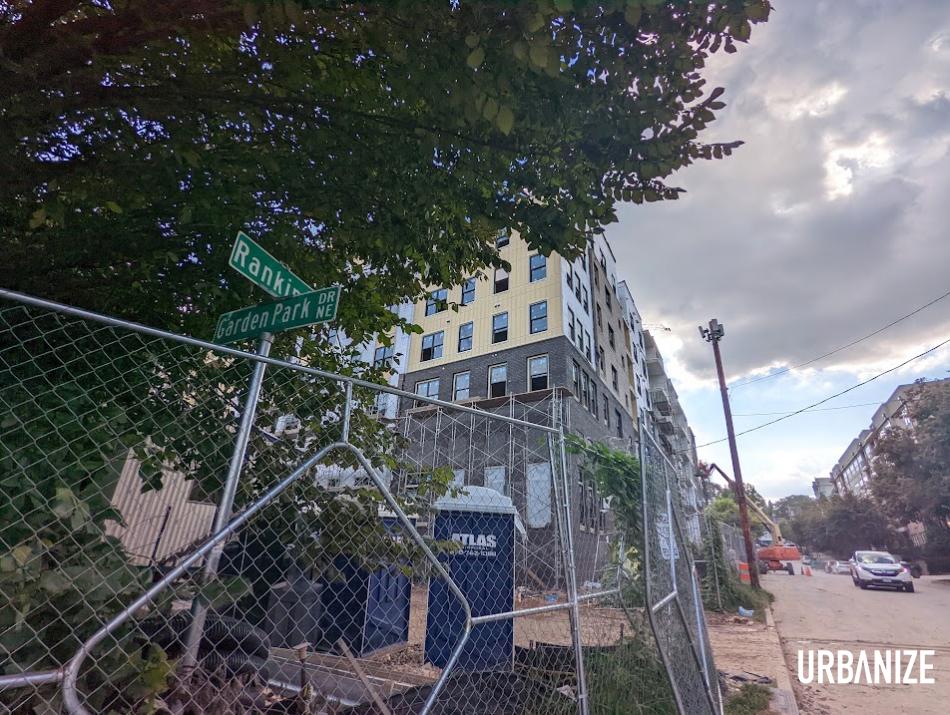 The building facade overlooking the park's main playground. The project's public greenspace will be installed at this corner, per site plans. Josh Green/Urbanize Atlanta

The Rule Joy Trammell + Rubio-designed Alexan apartments have risen just north of AMLI Parkside, joining well over 1,000 new rentals that have emerged in blocks around the park since it began opening 11 years ago.

We’ve asked Trammell Crow Residential reps for an update on the building’s delivery and how many units are planned to be reserved as affordable housing, as BeltLine inclusionary zoning rules dictate, and we’ll post any additional details that come. [UPDATE, 10:42 p.m., Sept. 6: According to a project official, 10 percent of Alexan Fourth Ward apartments are being reserved as affordable housing at 60 percent AMI, with first units expected to deliver in March.] 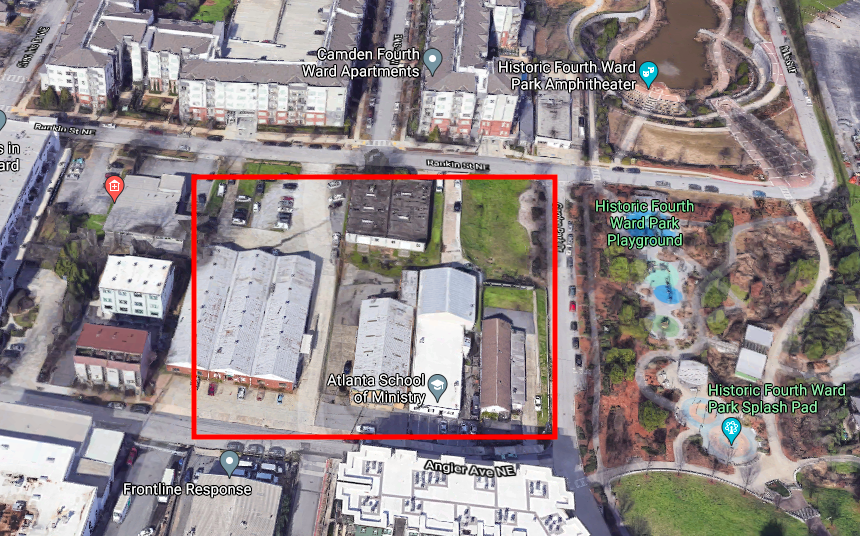 The block in question, just west of Historic Fourth Ward Park, prior to demolition of commercial buildings and warehouses a couple of years ago. Google Maps

Directly across Historic Fourth Ward Park, controversial plans for a 12-story condo building were nixed in favor of three, six-story townhomes expected to be priced in the $2-million range each, officials told Urbanize in early 2021. That townhome project, however, hasn’t taken off either.

Making more progress is New City Properties’ multifaceted Fourth Ward project along the eastern rim of the park’s pond, where 359 rentals are expected to open in a new 18-story, stair-stepped building in April.

The company is also behind Alexan EAV, Alexan Buckhead Village, Alexan on 8th in Midtown, among other rental hubs.

Local projects Alexan on Krog, Alexan Glenwood, Alexan Eight West, Alexan Vinings, and Alexan 1133 in Decatur, among others, have all been sold to other companies. 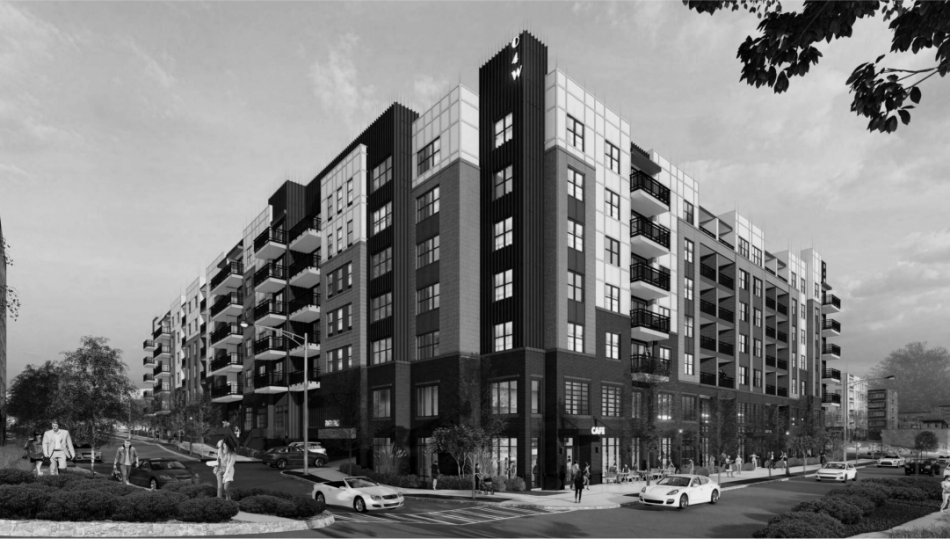 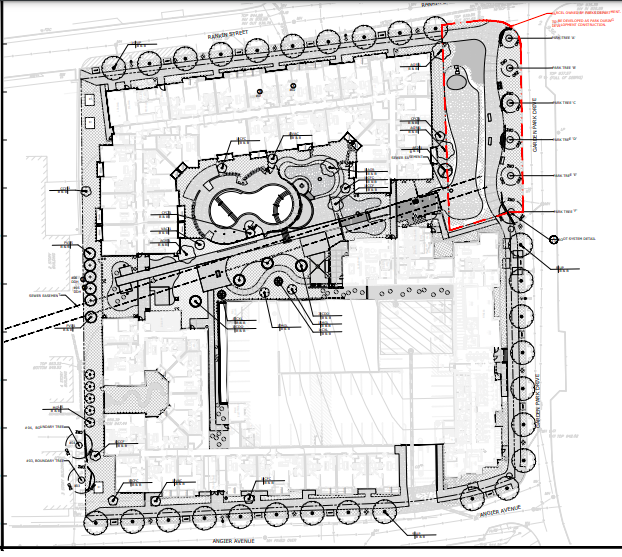 The building's footprint, with the reserved greenspace at top right, facing the existing park. Atlanta Department of City Planning