Like the Atlanta Braves’ stint in Summerhill, another former Turner Field parking lot is officially a thing of the past.

Officials with Trammell Crow Residential, one of the nation’s largest homebuilders, tell Urbanize Atlanta move-ins are beginning this week at the latest project in the company’s Alexan portfolio, continuing the rapid development of new housing options around Summerhill on underused or vacant land.

Alexan Summerhill, as the project’s called, is replacing 3.6 acres of parking spaces and empty lots with 325 apartments in the 700 block of Hank Aaron Drive. The Dwell Design Studio-designed project stands five stories across the street from Georgia State University football’s Center Parc Stadium, bordered by more than 100 new and under-construction townhomes in three separate developments. 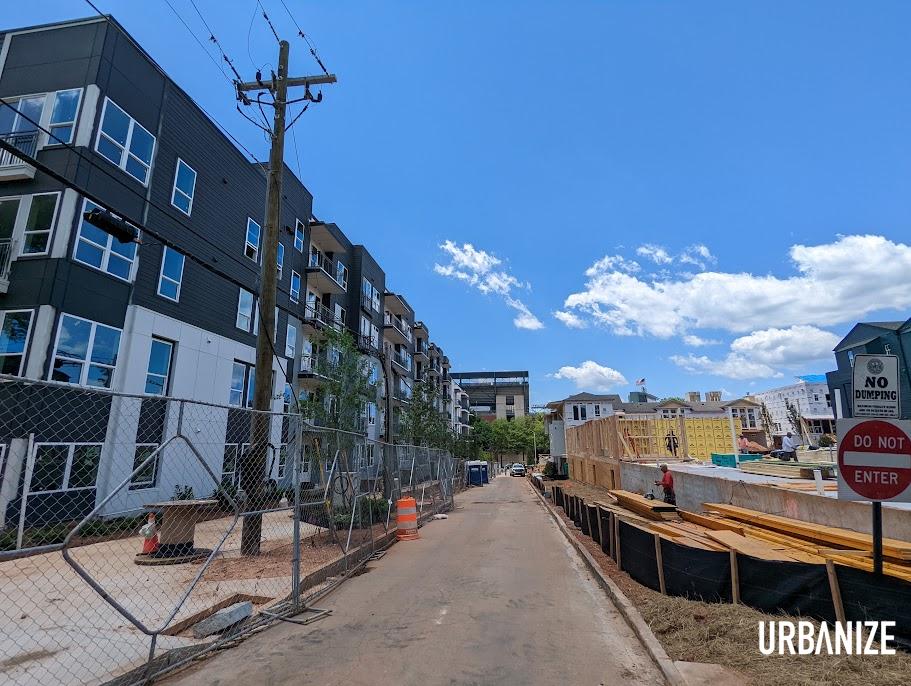 With Center Parc Stadium a block in the distance, the Alexan Summerhill project (at left) is finishing construction over Bass Street. The latest phase of Hedgewood Homes' Summerhill townhome project is shown at right. Josh Green/Urbanize Atlanta

As with the 276-unit Broadstone Summerhill apartments on the northern edge of the neighborhood, Alexan Summerhill will offer all of its rentals at market-rate, meaning no affordable or workforce housing component is included.

That means studios with 585 square feet start at $1,510 monthly, according to marketing materials.

Those rents allow access to amenities described as “unbeatable,” to include a podcast studio, tech lounge, maker spaces, a poolside bar, and a rooftop lounge with skyline views. (Added bonus for residents: the prestige of calling the Best Atlanta Neighborhood 2021 Runner-Up home.)

Alexan Summerhill spans roughly 280,000 square feet with 424 parking spaces. An assemblage of parcels on the block sold in 2020 for $7.6 million, according to Fulton County property records. 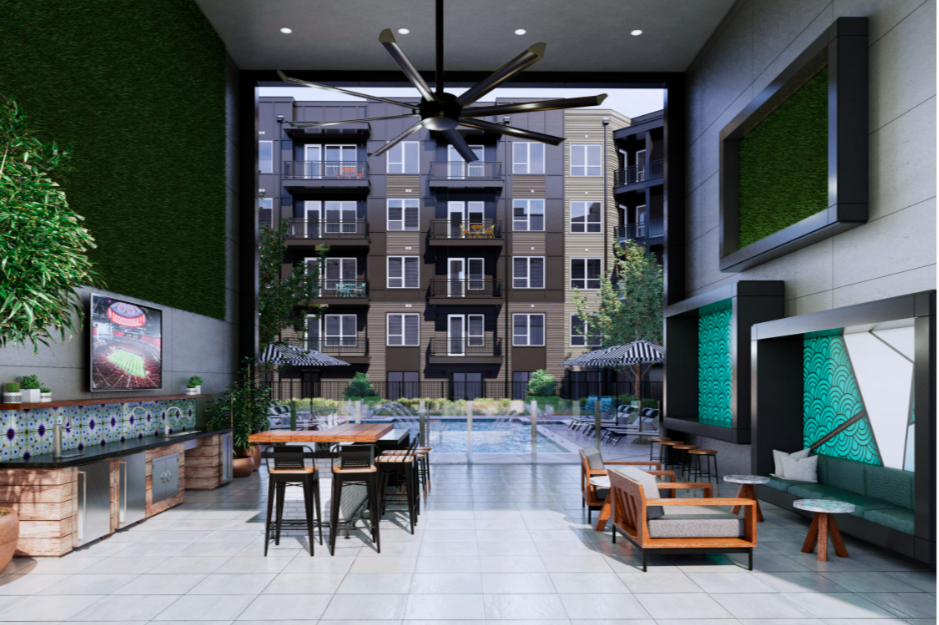 To the south, the apartments overlook the shuttered Fanplex facility that flopped as an arcade and mini-golf attraction next to Turner Field and closed in 2004. Another oddity is a payphone along the project’s eastern flank that’s part of a holdout property Trammell Crow didn’t acquire.

“Unfortunately,” Adams wrote via email, “we don’t own the parcel on the eastern edge, so we won’t be able to incorporate it into our project.”

Based in Dallas, Trammell Crow has built similar apartment hubs across Atlanta, including Alexan EAV, Alexan Old Fourth Ward, Alexan Buckhead Village, and Alexan on 8th in Midtown, among others.

The Summerhill complex will join more than 500 apartments opened on the north side of the stadium since 2019 in the Aspen Heights (220 units) and 565 Hank (306) projects. Across the street from the latter complex, construction is ramping up on a Publix-anchored, mixed-use venture that’s expected to deliver the major grocery option the neighborhood has long pined for.

In the gallery above, see how Alexan Summerhill has replaced former empty lots and how the project’s amenities are expected to stack up.