When it comes to the largest Atlanta BeltLine-adjacent development to date, New City Properties has made progress this summer with its stated objective to create memorable architecture and public plazas worthy of postcards.

The number of people photographing the rising Fourth Ward project on any given weekend—both with professional equipment and smart phones—is evidence of that.

The most recent addition to the modernist mini-city at the edge of Historic Fourth Ward Park is an 18-story, uniquely stair-stepped apartment building that topped out earlier this summer. Designed by New York-based architecture firm Morris Adjmi, the mix of standard apartments and live-work townhomes, or maisonette units, is meant to catch visitors’ eyes and echo landmark buildings in the area, such as Ponce City Market.

Expect 359 units in phase one’s lone residential component. Ten percent of those rentals will qualify as affordable housing for anyone earning 60 percent of the area’s median income, developers have said. 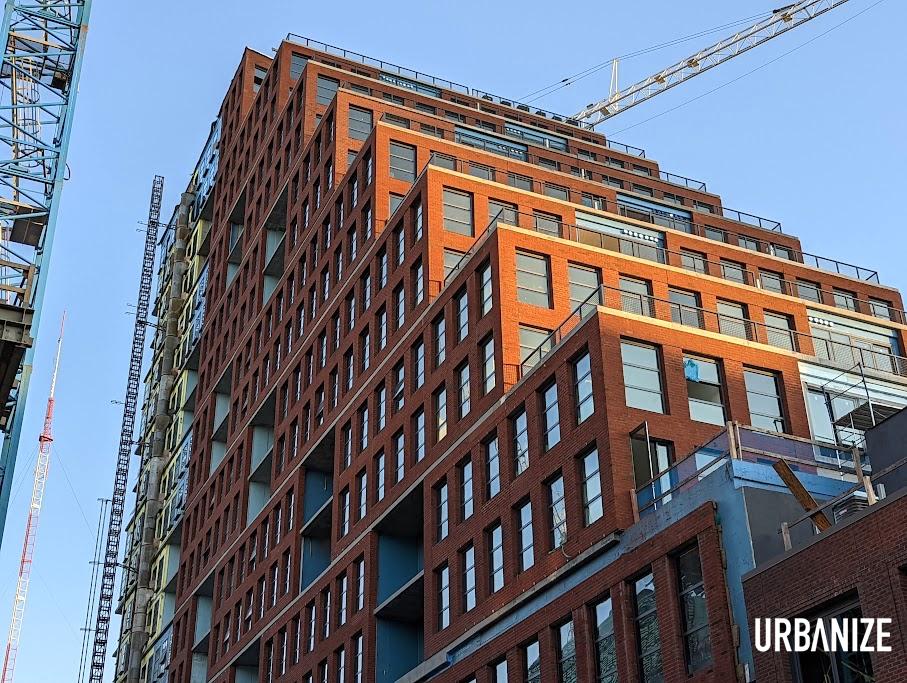 Closeup of the building's signature tapered design on the northernmost side. Josh Green/Urbanize Atlanta

The 12-acre site is considered the largest workable parcel of BeltLine-adjacent land on Atlanta’s eastside. New City acquired the former Georgia Power-owned property for $34 million in 2017.

At last check, New City’s timeline calls for opening the Fourth Ward project’s first two office buildings in September, with tenant move-ins (namely Mailchimp) coming early next year. The apartments are expected to finish in April 2023. After that, a third office tower and hotel beside the apartment building will open sometime in 2024, per developers.

Each of those five components are under construction now, as the photo gallery above shows. Head up for an overview and closer look at how the brick-clad apartments are stacking up.

[CORRECTION: 12:13 p.m., Aug. 31. A previous version of this article misidentified the apartment building's architects as Olson Kundig, a Seattle-based firm that instead designed the office components only. HKS, meanwhile, is the full project's local architect of record.]