Texas’ largest cities have been eating Atlanta’s lunch in terms of commercial real estate growth, but Georgia’s capital has held its own on a national scale for the past decade.

That’s one takeaway from a new report by 42Floors Inc., which found metro Atlanta has ranked sixth across the U.S. for the amount of commercial real estate development it’s packed on since the economic slump of 2010.

42Floors, a CRE listing service that’s part of Yardi’s network of platforms, tracked the evolution of CRE—that’s office, industrial, and retail properties but not residential—between 2010 and 2021 for a new study showing the South’s largest cities to generally be surging.

Atlanta’s metro, to include development hotspots such as Sandy Springs and Alpharetta, added just shy of 125 million square feet of total new CRE space since 2010, the study found.

That number bests competitors such as metro Phoenix (105 million square feet) and Miami (80 million) but falls far short of No. 2 Houston (208 million). And it’s not even half of what the Dallas-Fort Worth metroplex packed on (289 million square feet), per 42Floors' findings.

(It should be noted an unrelated analysis recently found that intown Atlanta has led the country since 2013 in the sheer amount of new apartments added, a key contributor to overall development patterns.)

Midtown's skyline roughly five years ago. Much has changed since. Shutterstock

Another bright spot for metro Atlanta came with industrial property completions. The burgeoning logistics and supply-chain hub added 92 million square feet of industrial and warehouse space since 2010—good for fifth in the U.S.

Despite gangbusters office construction and recent blockbuster deals including Google’s new 19-story offices in Midtown, metro Atlanta failed to crack the top 10 in terms of new office space added since 2010.

In that category, the New York City metropolitan area’s 79 million square feet was described as “untouchable.”

Here's a look at how 42Floors' top 10 performers for overall CRE development stack up: 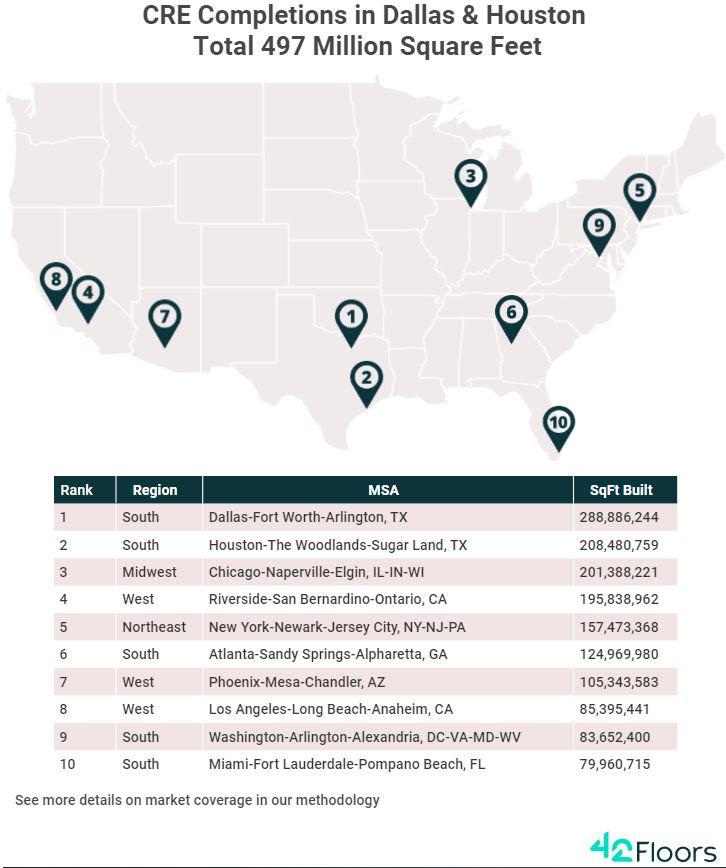