Recent national studies have shown that almost all of Atlanta’s new apartments (94 percent) qualify as “luxury,” and that Midtown leads almost all other neighborhoods in the country (behind only downtown Los Angeles) when it comes to the sheer amount of apartments recently built.

But how does metro Atlanta stack up when it comes to new rental product in the 2022 pipeline?

The metro currently ranks in eighth place nationally in terms of new development, with 12,800 apartments on the way from downtown to growing locales such as Decatur and Buford, according to a new study by RentCafe, an online apartment search database, based on Yardi Matrix data.

It’s part of a national boom in apartment construction fueled by rising inflation and interest rates that has pushed the dream of homeownership for many Americans out of reach for now, requiring more years in temporary rental leases, according to RentCafe. 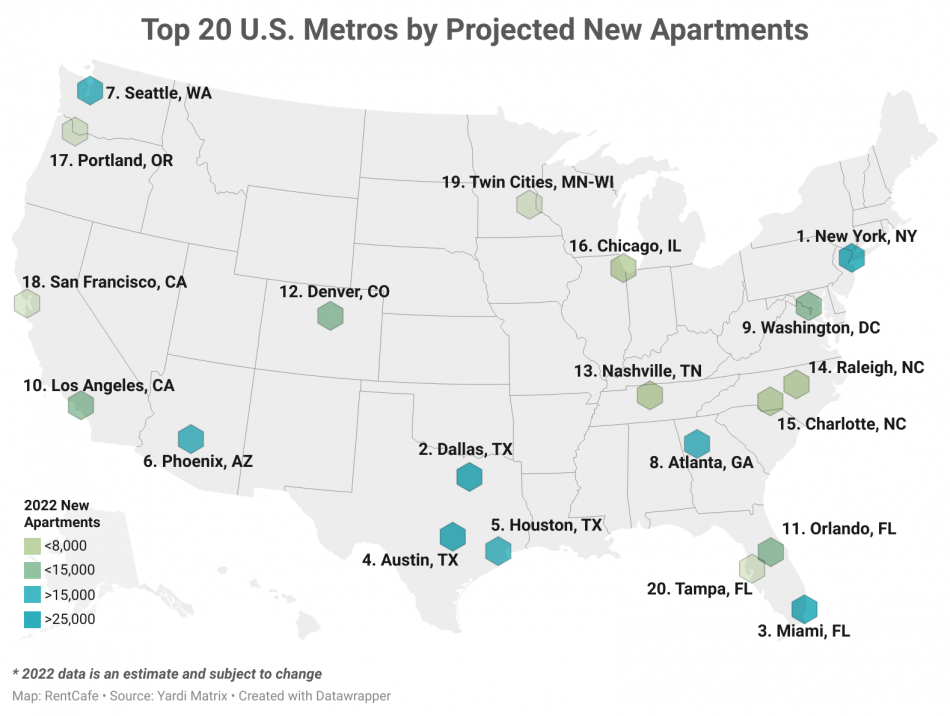 Across the country, some 420,000 new apartments are scheduled for completion in 2022. That’s a significant number, as apartment deliveries haven’t topped the 400,000-unit mark since 1972, per the analysis.

Atlanta has consistently ranked among the country’s top performers in apartment construction throughout the decade of a post-recession building boom that continues. But today, its stock of new apartment development isn’t even half what’s being built in greater New York (28,100 new units) or close to second-place metro Dallas (23,500) or third-place Miami (19,100).

The remainder of the top seven, ahead of metro Atlanta are, respectively, Austin, Houston, Phoenix, and Seattle, according to RentCafe.

Metro Atlanta has slipped from fifth place last year, when 15,250 new units materialized across the region.

More than half of new apartments in the metro Atlanta pipeline right now (6,693 units) fall within the city limits of Georgia’s capital, according to RentCafe. And of those Atlanta apartments, about 1,400 have already delivered in 2022.

That’s followed by Buford (744), Douglasville (671), and Decatur (534). Noticeably absent are fast-growing metro cities such as Roswell that have been resistant to rental projects.

As a RentCafe rep pointed out in an email to Urbanize Atlanta, new apartment construction is “perhaps the best way to stem rent prices, and we're thrilled to see development picking up the pace once again.” Doug Ressler, Yardi Matrix’s manager of business intelligence, noted the construction industry nationwide is finally returning to pre-pandemic activity levels but is “still being hampered by three familiar challenges: labor shortages; material costs and availability; and supply chain issues.”

In the decade between 2012 and 2021, the City of Atlanta packed on a whopping 48,200 apartments in multifamily buildings with 50 or more rental units, according to Yardi Matrix data. That amount was good for the seventh in the U.S. overall, behind New York, Seattle, and four Texas cities, according to earlier STORAGECafé findings.