If you’ve felt that Atlanta’s apartment explosion over the past half-decade has been impressive (or in some cases, oppressive), a new national analysis indicates there’s good reason for that.

Midtown in particular is on fire with apartment construction—notching the second most deliveries of any neighborhood in the country, in fact—though the shiny crop of new towers is just a fraction of what’s been built across the City of Atlanta.

That’s according to a study by RentCafe, an online apartment search database, that’s tabulated the most “apartment-crazed neighborhoods” in the largest 50 cities from coast to coast.

Midtown qualifies as the type of booming “hyper-urban” subdistrict that remains coveted by Millennial and Gen Z renters in particular, according to a list dominated by Sunbelt cities. 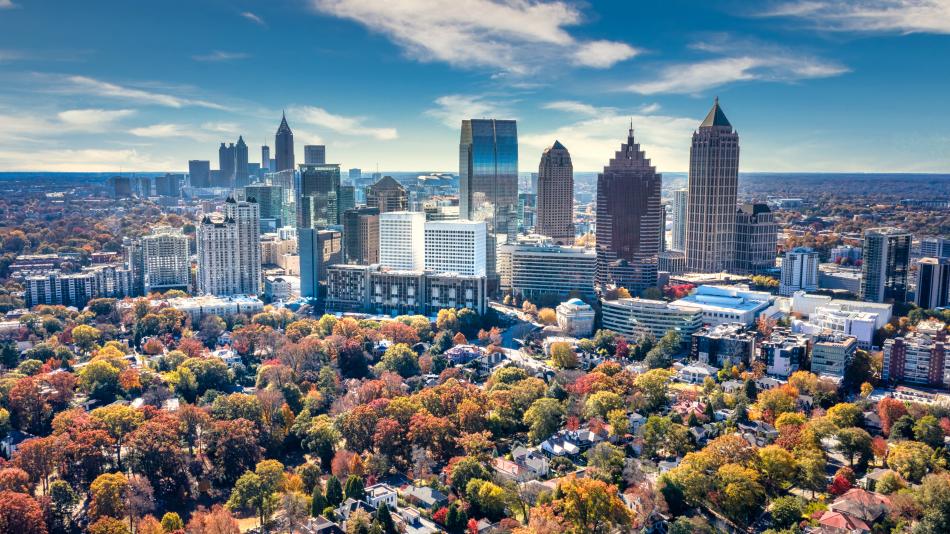 The amorphous Midtown skyline, as seen a few years ago. Shutterstock

Downtown LA has logged about 10,100 new units in the past five years, which accounts for 39 percent of all deliveries across La La Land.

Runner-up Midtown, meanwhile, chalked up just shy of 6,000 new apartments between 2017 and this year.

But that’s only about one-fifth of new rentals that have popped up within city limits during the latter half of Atlanta’s decade-long construction surge, per RentCafe researchers, who cite Yardi Matrix data.

The findings should hardly surprise anyone who’s been crane-watching in Midtown lately.

Across Midtown’s core business district, 20 large-scale apartment projects have come together since 2017, and 13 more are actively under construction (including student housing), according to Midtown Alliance.

That all falls within an area of 1.2 square miles.

In terms of methodology, RentCafe’s researchers studied new apartment construction data in the top 50 largest U.S. cities, as defined by the U.S. Census Bureau. Only apartment buildings with 50 or more new units were counted.

Neighborhoods with fewer than 500 new units—or less than three buildings finished in the past five years—didn’t make the cut.

Midtown, unsurprisingly, saw the lion’s share of all new apartment construction among Atlanta neighborhoods. That’s followed by Reynoldstown (1,732 units), which speaks to the magnitude of Memorial Drive projects such as Madison Yards.

Chattahoochee Bluffs, which is what they’ve labeled the Cumberland/Vinings area in Atlanta, is fourth with almost 1,400 new rentals.

Downtown Atlanta, a recent magnet for student-housing construction, rounds out the top five.

It's worth noting that Buckhead neighborhoods were counted as separate entities as opposed to one cohesive district. 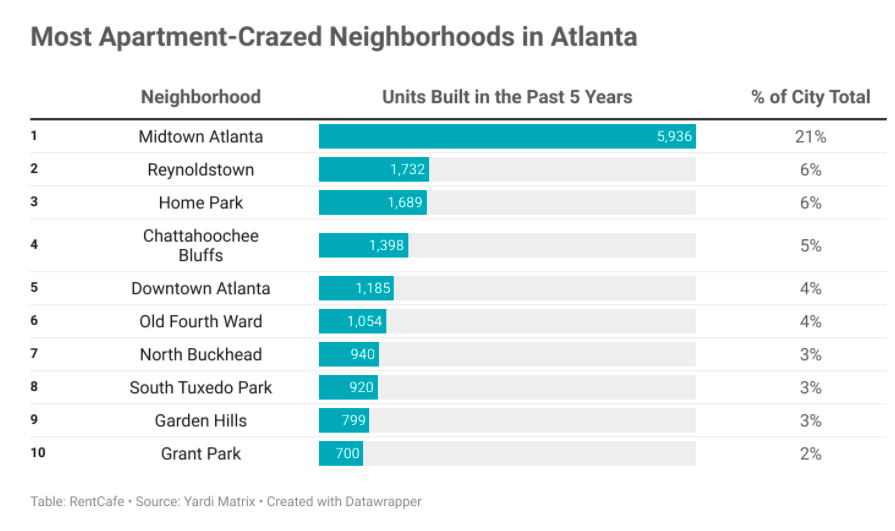