Seattle-based coffee empire Starbucks has canned plans for a new drive-thru location that would have remade a gritty corner on Boulevard, up the hill from Ponce City Market, sources confirm to Urbanize Atlanta.

Starbucks had been eyeing property to build a ground-up new bistro at the northeast intersection of two busy intown corridors, Boulevard and North Avenue, for well over a year. Plans that came to light in October 2021 promised a 2,500-square-foot building positioned close to the intersection’s sidewalks; to the chagrin of urbanists, the corner also would have seen a specialized drive-thru installed with a looping queue design.

The Starbucks would have replaced a shuttered medical facility and empty 1940s home in what’s considered the largest concentration of Section 8 housing in the Southeast, albeit a development hotspot for revitalized affordable housing these days.

But that’s all gone the way of yesterday’s Pike Place Roast now.

The view from North Avenue, at left. Submitted

Michael Wess, a partner with Bull Realty who represents the property sellers, confirmed to Urbanize Atlanta that Starbucks has backed out of the deal but couldn’t explain why.

Starbucks planned to acquire .7 acres across the two properties, both now zoned for commercial businesses. Wess said his clients re-listed the property immediately after Starbucks U-turned from its Boulevard vision, and another deal wasn't far behind.

“We marketed the property initially as a mid-rise development site while attempting to assemble some surrounding pieces,” Wess wrote in an email. “As assemblages just about always take a long time to close, the owner opted for a quicker deal to a local business owner.” 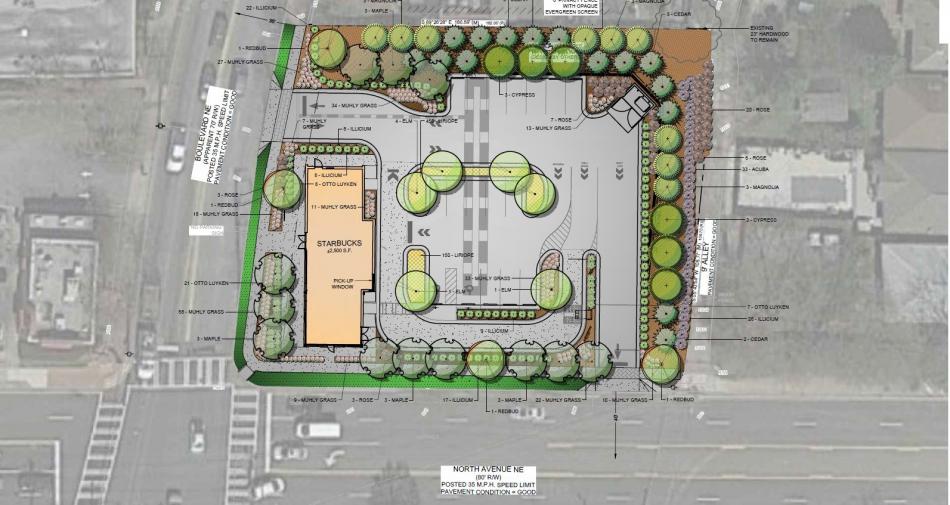 We’ve asked for more details on exactly what the new business concept on the corner will entail, and this story will be updated with any additional info that comes. Word from Old Fourth Ward residents is that a canine daycare and spa concept was sniffing around the property, but that’s not confirmed.

The site is less than three blocks from tourist attractions Ponce City Market and the BeltLine’s Eastside Trail, and just up the street from the upscale Novel O4W apartments.

The coffee shop would have occupied the same block as a new drive-thru Chick-fil-A under construction on the same side of the street, at the corner of Boulevard and Ponce de Leon Avenue.

But fear not, O4W Frappuccino fiends: Just east of that new Chick-fil-A, across the street from PCM, Starbucks continues to operate a dine-in location in the Midtown Place shopping center.