The majority of apartments in the City of Atlanta—that’s 58 percent across all sizes, in all neighborhoods—now rent for more than $2,100 monthly.

Meanwhile, finding any sort of rental for between $500 (ha!) and $1,000 could be tough, as those represent just 3 percent of what’s out there now.

Those are a couple of key—if depressing, unless you’re a landlord—takeaways from a Rent.com market report provided to Urbanize Atlanta this week that breaks down the rental outlook on a neighborhood level across the city.

The findings appear to paint a more accurate picture of what’s happening in Atlanta than questionable, earlier data suggesting the ATL was that rare city where one-bedroom rents have actually decreased since early 2021.

The most recent data could be useful to Atlanta renters looking to swap neighborhoods, or to the influx of renters streaming into this “hotspot” from other cities.

The analysis shows that rents for apartments of all sizes in the City of Atlanta (studios to three-bedrooms) have increased over the past year. The most daunting jump of 21 percent was logged for two-bedroom rentals, which now charge $2,523 monthly on average. (Even studios are commanding an average of $1,755 now, which just might melt the minds of longtime market watchers.)

As mentioned before, those two-bedroom prices fall within the majority of rents across the Atlanta landscape right now:

A glance at the top 10 priciest neighborhoods for studios shows Mechanicsville ranking surprisingly at No. 2, which surely speaks to limited supply in the neighborhood just south of downtown. 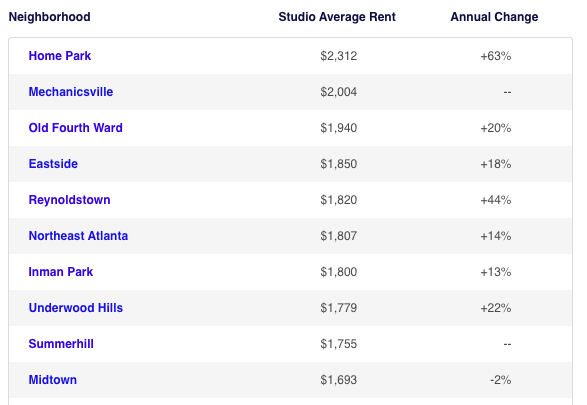 Overall, the most expensive neighborhoods for renting one-bedrooms begin with historic loft haven Castleberry Hill, where average rents are $2,400. 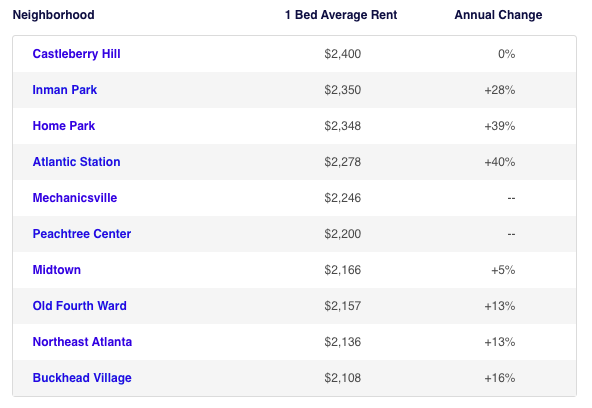 Conversely, Edgewood lands in the top 10 for priciest two-bedrooms, on average: 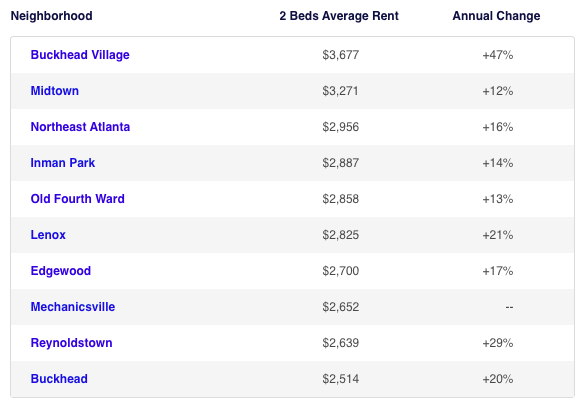 And if all of this makes you wanna throw in the towel and hightail it to the suburbs, here’s what you can expect to pay monthly for a two-bedroom in the top five priciest satellite cities:

And these are defined as the top five cheapest "suburbs" for finding a nice two-bedroom rental, with apologies to ITP College Park: