In this time of rapid inflation and career upheaval, the jury’s still out on how much the cost of renting an apartment around Atlanta has increased (or not) since the onset of COVID-19.

But by all indications, metro Atlanta still registers as a relatively cost-friendly alternative for renters in the nation’s top metropolitan areas, all things considered.

A new analysis by RentCafe, an online apartment search database, confirms those findings once again—but shows the bang for renters’ bucks isn’t what it used to be around Atlanta, with some exceptions.

RentCafe honed in on a specific number—$1,500 monthly—to see what that rents across America’s cities these days. Only properties with 50 or more units were considered.

On the bright side for renters, the City of Atlanta’s rents remain middle-of-the-road among the top 100 metros, clocking in at No. 59.

Less uplifting is the fact that $1,500 will afford Atlanta renters, on average, a one-bedroom pad maxing out at 821 square feet, the analysis found. (The days of $1,000, two-bedroom rents for highly amenitized buildings in places like O4W being long gone.)

That’s not to say deals don’t still exist. They’re just lurking in the suburbs—but generally not in the wealthier, northern OTP arc.

Clarkston led the way in metro Atlanta for biggest bang for $1,500, with rentals averaging 1,413 square feet for that price, followed by Forest Park and Morrow, respectively. 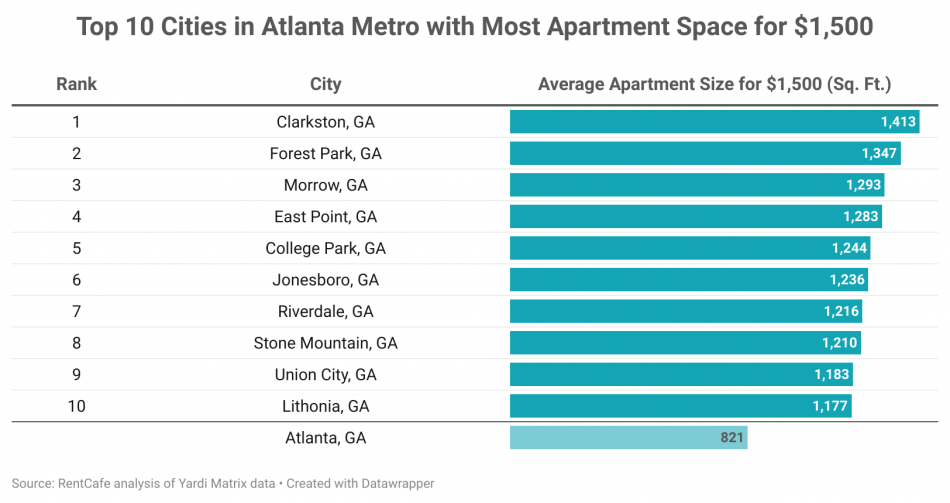 On the flipside, the metro’s priciest suburbs are more expensive than Atlanta now, on average.

In general, RentCafe found that $1,500 stretches the furthest in cities across the Midwest and South—with coastal places being the exception. 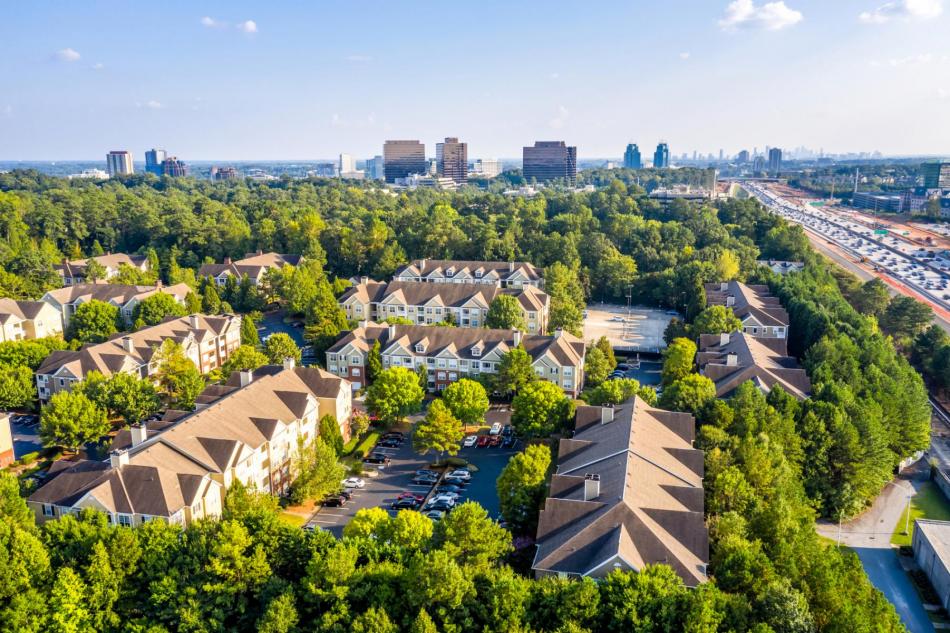 Rent budgets of $1,500 monthly get less than 800 square feet around Sandy Springs these days, per the RentCafe analysis. Shutterstock

Average rents for all multifamily properties in the City of Atlanta clocked in at $1,777—and apartment sizes at 973 square feet.

Not surprisingly, the list’s bottom-dwellers are Manhattan (262 square feet per $1,500), Boston (340 square feet), and San Francisco (345 square feet), with Brooklyn, Queens, Jersey City, Los Angeles, and others not far behind.