One of Atlanta’s most well-known development firms says it’s aiming for next-level amenities with its first residential venture in Atlanta—and they’ve supplied a fresh batch of renderings as evidence.

Portman Residential, a new real estate development affiliate of Atlanta-based Portman Holdings, has officially christened its first residential project “Sora at Spring Quarter,” with what are described as a “wide range of above-market amenities” in the works.

The 370-unit apartment building is currently rising at 1000 Spring Street, a block east of the downtown Connector. It’s considered the first phase of Portman’s larger Spring Quarter mixed-use development, which is consuming more than 4 acres across nearly a full city block. The apartment component has replaced a surface parking lot on what Portman says is Midtown’s highest elevational point. 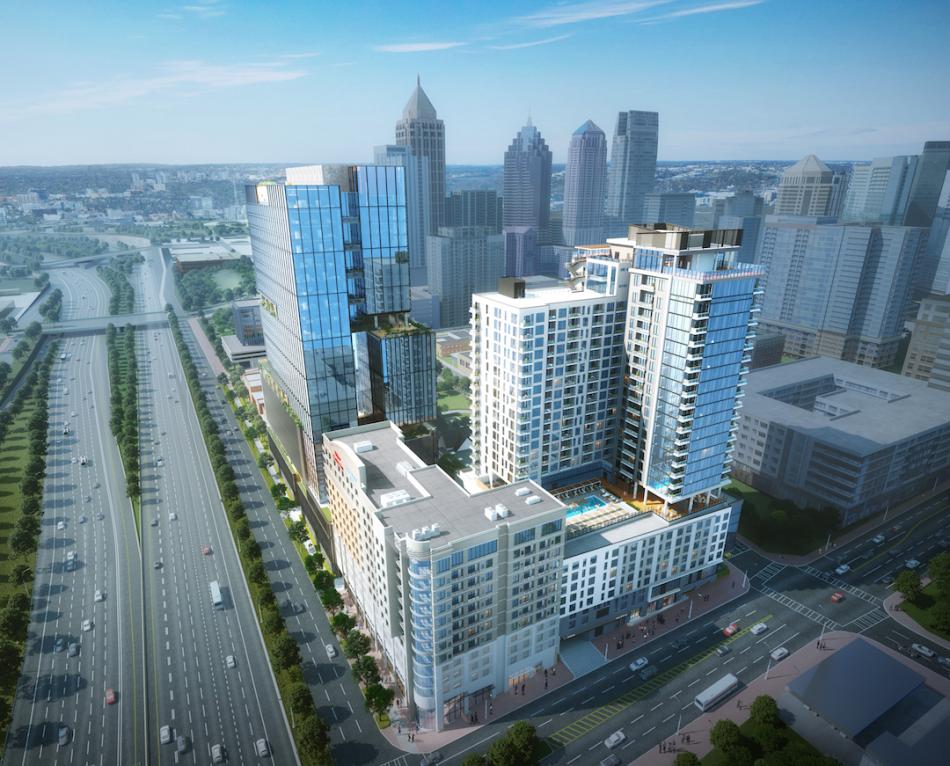 New rendering depicting the stances of Spring Quarter apartments (white) and offices next to the downtown Connector. Courtesy of Portman

The Sora apartment stack will feature an infrared sauna as part of its amenities package—a first for an Atlanta residential building, Portman reps said this week.

By using specialized light panels to warm people and not the air, infrared saunas provide heat-therapy benefits, aligning with Portman’s goal to increase focus on wellness and health for tenants at the Spring Quarter project, per company officials.

Other perks of the apartment building will include a sky lounge on the 29th floor (sorry, renderings aren’t yet available; ditto for the sauna) overlooking the city with rentable private areas for tenants, Portman officials said this week.

Below that, the Sora building’s amenities will include multiple fitness centers equipped with a climbing wall, golf simulators, party rooms, coworking spaces, something called a garden room, a pet run and spa, an outdoor fitness lawn, a resort-style pool, and arts and media rooms, among other features.

Portman Holdings, which has helped redefine Atlanta’s skyline with hotel and office sky-rises for more than six decades, started going vertical in recent months on the apartment tower at the northwest corner of 10th and Spring streets.

The Cooper Carry-designed residential building is considered Spring Quarter’s first phase. Plans at the base also call for 11,000 square feet of retail, with modern-style interiors by Fogarty Finger. 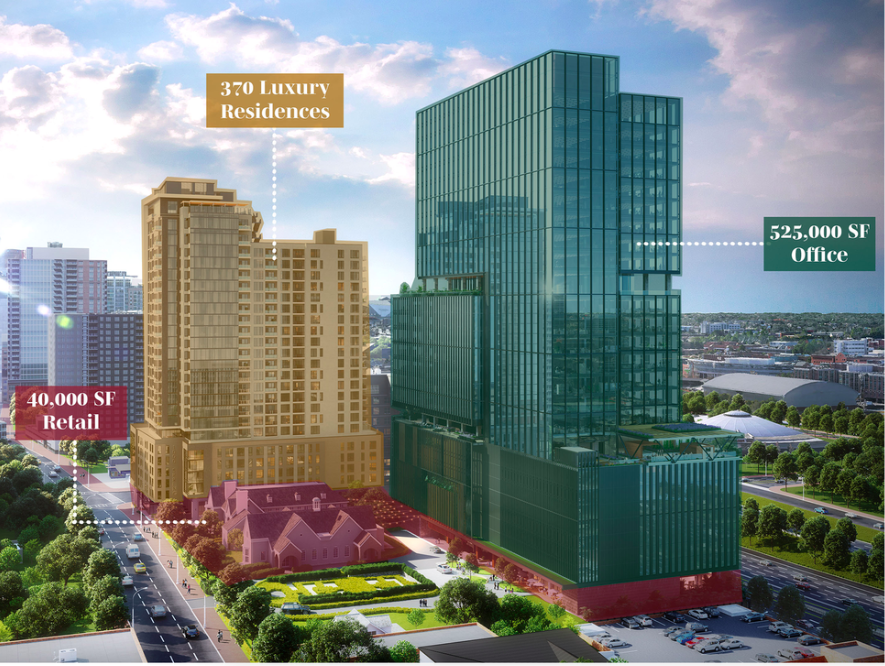 Breakdown of Spring Quarter uses. All aspects are under construction now and expected to fully deliver in the third quarter of 2025. Courtesy of Portman

Just northwest of the apartments, the 25-story office component, 1020 Spring, is also under construction, next to the nearly century-old Spring Hill Mortuary (H.M. Patterson House). That Philip Trammell Shutze-designed landmark will be adaptively reused and woven into redevelopment plans, Portman officials say.

Renderings show the historic mortuary functioning as a restaurant, but it could also house shops, per Portman reps.

Apartments are expected to begin delivering sometime in 2024, and the full project is set to wrap in the third quarter of 2025. Head to the gallery for fresh perspectives and modified renderings showing what’s in store for Spring Quarter’s residential, retail, and office components.