On a recent weekend afternoon, under pristinely blue October skies, a group of young coeds held a meet-and-greet over tables and cornhole boards. Up a grand flight of stairs, musicians strummed a guitar and tickled keyboard keys at a perch with views to a variety of Atlanta buildings, including an upscale new student housing tower. All the while an iconic downtown fountain, which had been sadly dormant for so many years, whooshed and burbled.

After revitalization discussions and planning studies dating back to at least 2016, it was clear the 80-year-old, triangular landmark that is downtown’s Hurt Park had made its comeback. Or as one Georgia State University official said, when the 2-acre greenspace was officially unveiled in August, “These renovations restore the former glory of the park.”

The City of Atlanta owns Hurt Park, but Georgia State University is responsible for maintaining the grounds and ensuring they’re safe, as the downtown campus surrounds the greenspace. The park's revitalization is part of a broader GSU master development that includes a new connective Greenway (located less than a block away) and the recently finished convocation center/basketball arena/concert venue in Summerhill. 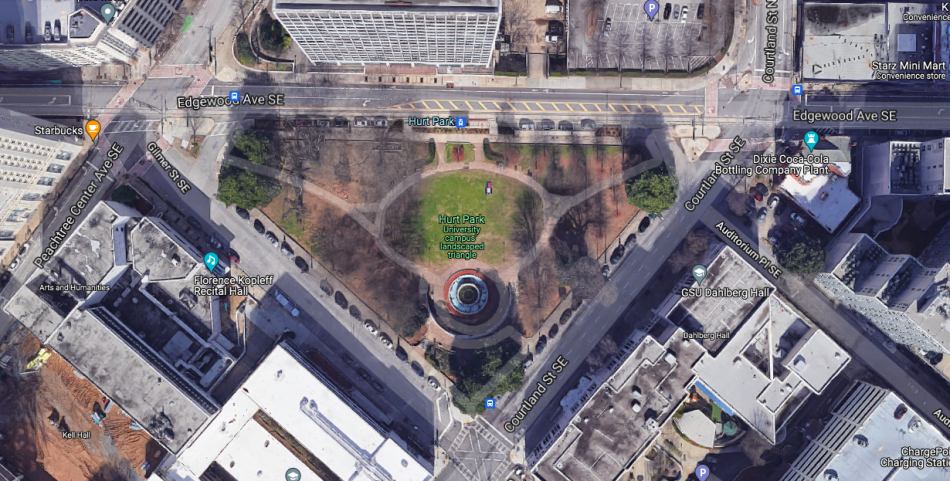 The triangular downtown greenspace prior to construction. Google Maps

Opened in 1940 and considered a feather in the cap of Atlanta Mayor William B. Hartsfield’s administration, Joel Hurt Park was heralded in its early years for a dazzling light show that lent a rainbow effect to the park fountain’s pressurized water spouts. A postcard from 1947 describes the fountain as “a sight of rare beauty by night when the sparkling jets of water are brilliantly illuminated.”

The park in more recent years had become a refuge for Atlanta’s homeless—until construction fences were erected in August 2020, barring public access. Talks of a Hurt Park makeover, with the possible addition of a performance stage, date back at least six years.

Find a quick photo tour of this refreshed downtown greenspace in the gallery above.