If reader inquiries are any indication, the People of Atlanta are still waiting with bated breath for a more seamless, quicker, and ADA-accessible means of exiting the BeltLine’s Eastside Trail onto Ponce de Leon Avenue, where shopping and eating options abound.

The good news is that Atlanta BeltLine heads have picked a company to build the project and are moving forward with efforts to educate the public on what’s to come, though a definitive timeline for opening the BeltLine-Ponce connection has yet to publicly emerge.

Prior to delays, contractors had been expected to begin work in July 2021 on a streetscape-enhancement project along roughly a half-mile section of Ponce, spanning between Boulevard and John Lewis Freedom Parkway, that would include the ADA-accessible ramp between Ponce and the Eastside Trail. That didn’t happen, and instead the BeltLine released invitations for contractors to bid on the project this past spring, with an April deadline.

Jenny Odom, BeltLine spokesperson, sends word that Atlanta BeltLine Inc. has picked JHC Construction for the contractor job and finalized a contract. The next step will be to execute an agreement with the Georgia Department of Transportation (it’s a state route, after all) and Invest Atlanta. After that, the contractor will be issued a notice to begin work.

We’ve asked for a timeline on how long that process might take—and for an ETA on the project overall—and we’ll update this story should further details come. (BeltLine officials have previously said construction is expected to take about 18 months total, once it begins.) 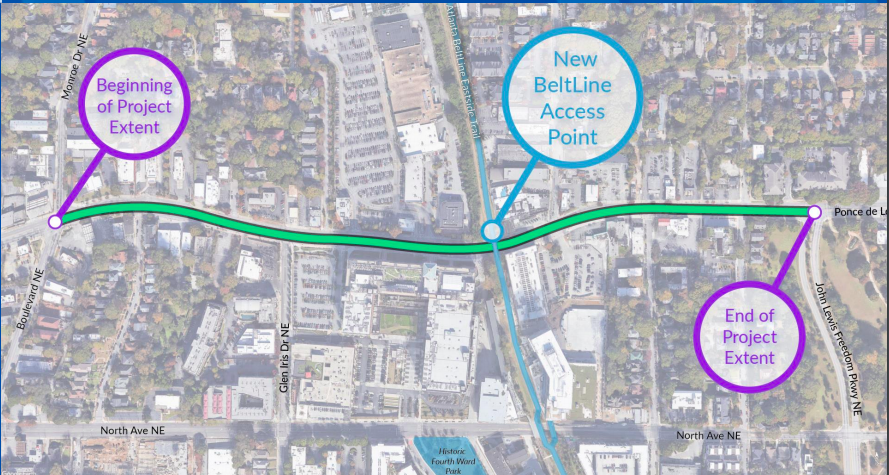 In the short term, BeltLine officials expect to schedule a community meeting sometime in August to introduce the contractor and provide an overview of the streetscape and ramp project.

An enhanced pedestrian connection at Ponce has been part of the Eastside Trail’s plans since it debuted in 2012.

The goal is to improve pedestrian and cycling conditions at the confluence of four intown neighborhoods—installing the ramp on the north side of Ponce, between the area’s CVS and the BeltLine—and providing better connectivity to places like EATS, Green’s Beverages, Whole Foods, and the rest of the Midtown Place shopping center.

The ramp system will look similar to Edgewood Avenue’s metal-ramp connection to the Eastside Trail where Old Fourth Ward meets Inman Park. The surface, however, won’t be serrated metal, in order to spare dogs’ feet, BeltLine officials have said.

Existing bike lanes on Ponce will be milled and resurfaced, and flexible delineator posts will be installed in places throughout the project. Ponce bike lanes will be extended on both sides of the BeltLine, up to the entrance of the new Kroger in Poncey-Highland.

Tight right-of-way constraints and existing traffic-lane configurations on that section of Ponce will prohibit the bike lanes from being extended all the way to John Lewis Freedom Parkway, BeltLine planners said last year.

Expect trees and new lighting in buffers between sidewalks and the remade bike lanes. Traffic signals will be reconfigured at Boulevard, Glen Iris Drive, Midtown Place, and the entrance to Kroger and the 725 Ponce development, according to BeltLine officials. Rolling lane closures on the street and partial closures of the BeltLine—just north of the Ponce bridge—are expected.

Head up to the gallery for more visuals detailing what's expected to happen, at last.