Friday will mark three weeks since ceremonial shovels and heavy equipment scooped dirt at a forlorn, vacant former shopping center in Clayton County, where a mega-development proposal that looks like Salvador Dalí’s interpretation of Dubai is expected to thrust the south metro county onto the global ultra-luxury stage—at least according to those proposing it.

Since that ceremonial groundbreaking for “The Roman” on 26 acres that straddle Lake City and Morrow, the head of the development group pitching the $800-million idea has gone quiet, a media report critical of the endeavor has published, and a dearth of activity in building permit filings and other required paperwork is calling the seriousness and viability of the project into question. A falsified portfolio of previous work on developer Roman United’s website has also been dismantled.

Jacques Roman, Roman United’s CEO and founder, sounded beyond confident in late August that the multi-tower project would not only be fully realized—despite a price tag more than twice the cost of the Atlanta Braves’ stadium—but would “make Clayton County the most-wanted zip code not only in the U.S. but in the world,” per a statement at the time. Roman has previously said the project would be privately funded, but exactly where the mammoth amount of cash required to pull off a project of such scale would come from remains a mystery.

Roman canceled a scheduled interview with Urbanize Atlanta on August 30, citing “an unexpected family emergency” through a spokesperson. Requests for interviews in the weeks since have gone unanswered. 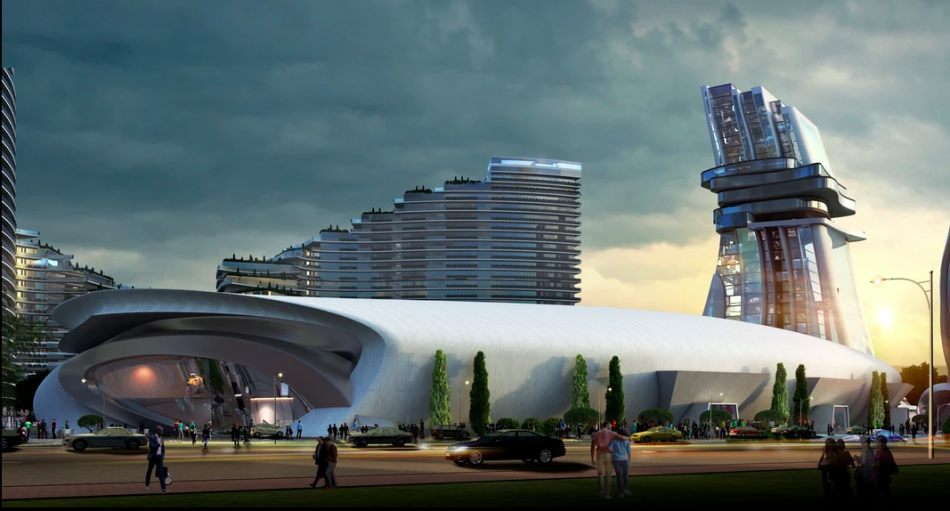 An updated rendering for the multi-tower, $800-million The Roman proposal, which would be anchored by a modernistic, low-rise amphitheater shown at center. Courtesy of Roman United; designs, Yamasaki/Bad Consult

Christopher Leighty, Lake City’s city manager, says no requests for building permits have been filed with the city as of this week. (A Roman United rep said the ambitious if not impossible goal is to nonetheless complete phase one of project—a 7,500-seat amphitheatre and 27-story condo building—by August next year.) The abandoned Ingles grocery at 5711 Jonesboro Road, where several other development ideas have fallen apart, is owned by the Development Authority of Clayton County. “We would very much like to see the site selected for this project get developed,” Leighty wrote via email, “as it has been vacant for over 10 years.”

Jeffrey Turner, Clayton County Board of Commissioners chairman, specified in an email to Urbanize Atlanta the county’s only financial investment in the project is currently funding for the construction of a planned business incubator at The Roman. Anyone expecting a tax-abatement or incentives windfall by developing the site will be out of luck, according to Turner. The county has agreed to supply $4 million in sales tax funding to cover construction costs that won’t be shelled out if the incubator component falls apart.

“It’s our goal to continue to work through the process as we would with any other private development, regarding issues or requirements such as zoning, tax incentives [and] abatements, and other requests that would contemplate checks and balances,” Turner wrote via email. “The ultimate goal is completion of a successful project while being responsible with the county’s financial resources.”

Roman previously said he’d scoured metro Atlanta for the perfect site to build a futuristic, state-of-the-art complex with international architects but was won over by Clayton County’s “philosophy and mission.” Officially titled “The Roman at Clayton County Entertainment Complex,” or “The Roman at CCEC” for short, the project’s site is located about eight miles from Atlanta’s airport, or a dozen miles from the city’s center, where projects of such scale are traditionally built. The deal goes that Roman would lease the site from the county for “almost nothing,” or $10 annually for the next 50 years, according to an in-depth AJC report published earlier this month. 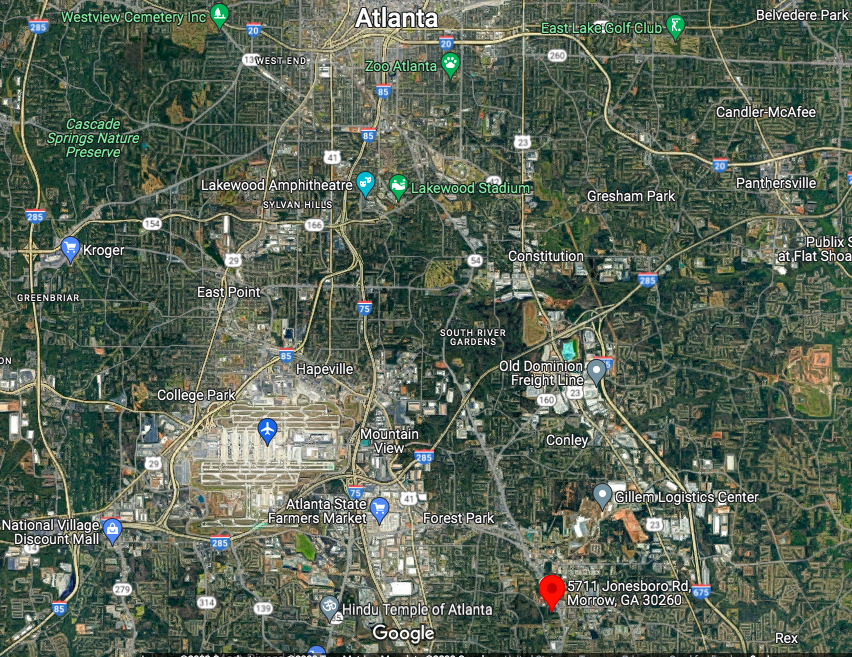 The $800-million venture's location (bottom, in red) in relation to Atlanta's airport and downtown, according to project reps. Google Maps

According to the AJC’s reporting, Roman was evicted in 2019 from his Dunwoody apartment for failing to pay about $2,700 in rent and utilities, and his company’s website recently featured supposed Roman United projects the company had no hand in building. Roman’s background is in construction and artificial turf installation, and he told the AJC the company he founded in 2019 is now located in a Buckhead office building, employing 25 people. Roman United’s website has been updated since the August groundbreaking festivities with more sophisticated renderings.

Clayton County’s development authority, Invest Clayton, put out a call for proposals for the former Ingles site in 2019 and selected Roman United’s bids from three placed. Eventual plans call for four luxury high-rises standing at least 25 stories tall with no workforce housing component—in a county of roughly 300,000 people that doesn’t even have a Target retailer yet, and where almost 17 percent of residents live below the poverty line. Larry Vincent, Invest Clayton’s executive director, told the AJC his agency is willing to support Roman’s grand vision nonetheless, noting that “all the great developers in Atlanta started somewhere.” 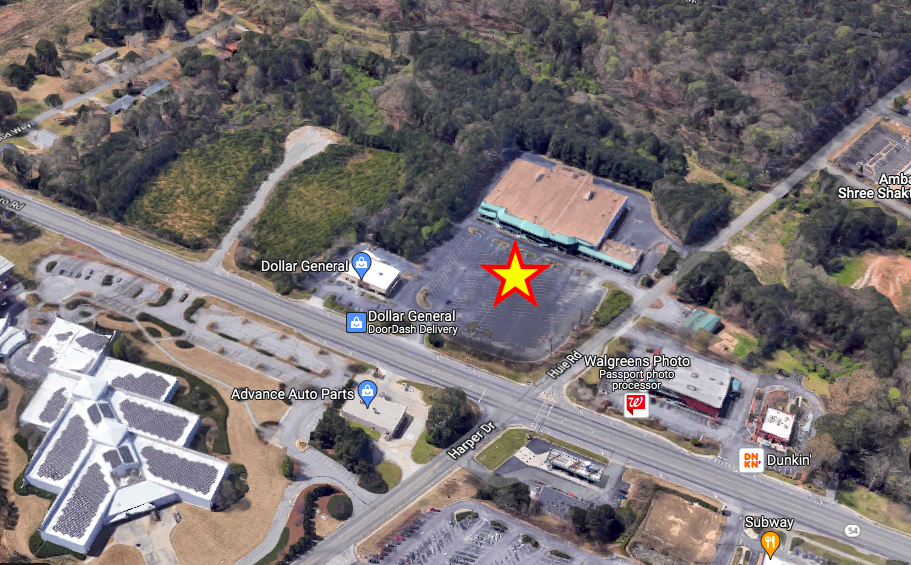 On board for designs is Yamasaki, a Detroit-based architecture firm founded in 1955 with a portfolio of projects and grand proposals around the world, including in explosive markets such as China, Dubai, Saudi Arabia, and Abu Dhabi.

An alliance of international and local architectural firms and engineering companies called Bad Consult is also involved. The Dubai-based company has seen 32 projects with $12 billion in value realized, per its website. 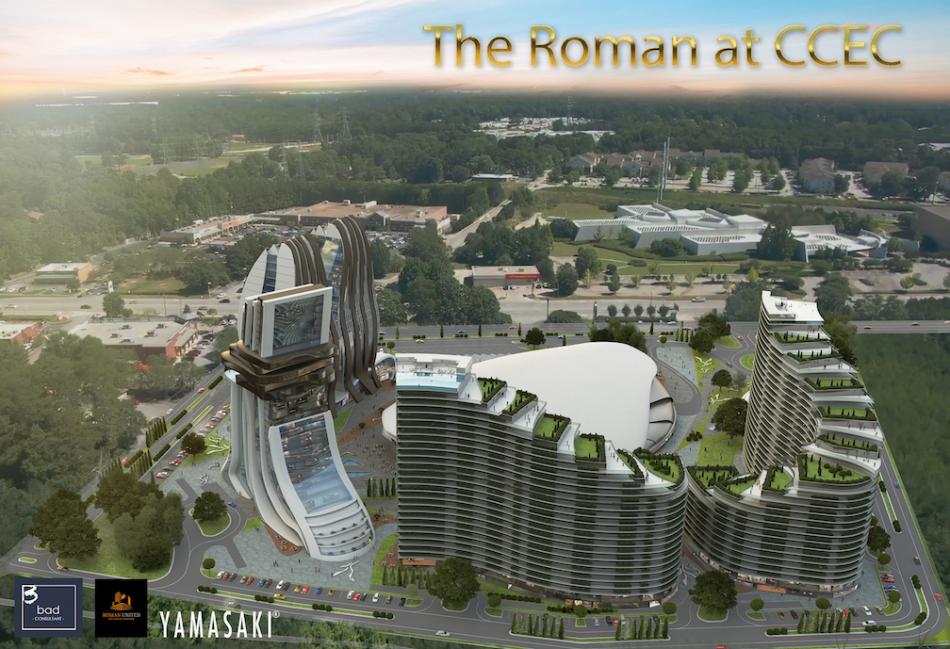 In 2020, however, Bad Consult partnered with R&B singer Akon for a $6-billion proposal in Senegal called “Akon City” that’s been likened by former partners to a Ponzi scheme—allegations the singer’s reps have denied.

Hussein Bakri, Bad Consult’s founder, was in Clayton County for last month’s groundbreaking. He told the AJC The Roman will generate thousands of jobs for the area—and that investors are practically falling over themselves to be part of it, now that a groundbreaking has made the project official.