Positioned between the serpentine Etowah River and the revived, historic streets of downtown Canton, the redevelopment of a historic mill that once made Cherokee County famous for its denim production today provides an alternative to so many built-from-scratch, suburban shopping and dining nodes. It's different enough to be called refreshing, like autumn mornings.

Situated about 38 miles north of Midtown, The Mill on Etowah shopping, dining, and office district broke ground in 2018 and continues to evolve, embracing its distinctive setting amidst a 120-year-old former cotton mill.

Founded in 1899, the brick-built mill on the river’s banks became a Canton icon and major denim producer until its owners, the Jones family, shut down operations in 1981. Nearly four decades later, Alpharetta-based developer Penn Hodge and business partner Grant Schmeelk, a former banker, bought the property for $3.6 million from the Jones family and began implementing their vision across its 35 acres. 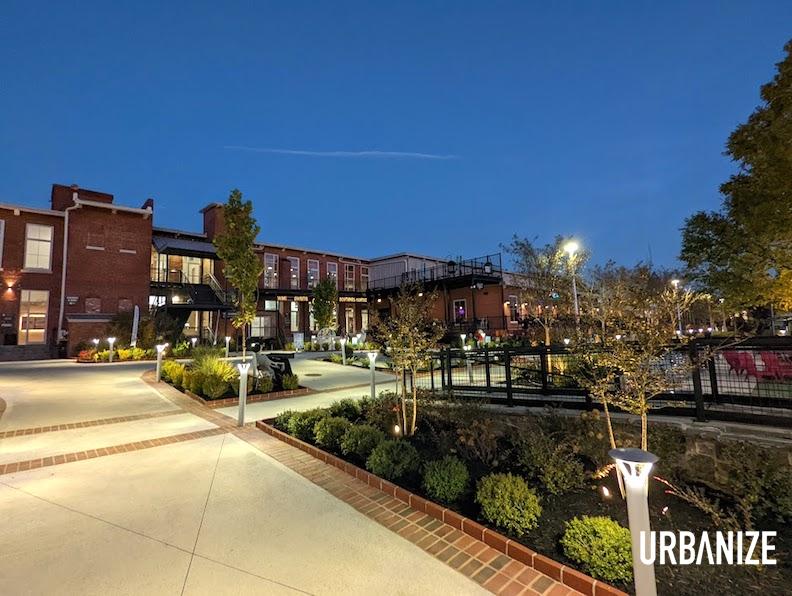 The project made headlines in 2019 when Reformation Brewery uprooted its main warehouse and production facility from Woodstock to The Mill, opening alongside another marquee tenant, Cotton Mill Exchange, where some 200 artisans and makers showcase their wares in a sprawling store that charmingly creaks with age. That same year, the Georgia Economic Developers Association presented The Mill with its “Deal of the Year” award for strategic, creative use of the shuttered landmark property.

Today, The Mill counts 250,000 square feet of space, and all of it is leased, Hodge tells Urbanize Atlanta. A section of the property where a concrete plant once operated has been sold to Kurt Alexander of The Residential Group, who plans to start building 280 multifamily units next spring, Hodge says.

Per locals and city boosters, The Mill has emerged as a place of pride for Canton. The Cherokee County seat, set in the foothills of the Blue Ridge Mountains, has seen its population of roughly 34,000 more than quadruple since 2000. Hodge, for one, expects big things from Canton over the next decade.

“There's nothing quite like it,” says Hodge of The Mill and its setting. “The downtown has great bones with historic buildings and an excellent collection of chef-driven restaurants. The city is wrapped by the Etowah River, and they’re connecting the five river parks with a green belt that will blow away anything I’ve seen in the Southeast. The case is just too compelling not to jump in.”

For mountain-bound Atlantans needing a pitstop, or a day-trip destination in itself, the district’s first fall festival, Denim Fest, is on tap for October 28 and 29. In the meantime, hike up to the gallery for a photo tour of this unique, buzzy adaptive-reuse overhaul that managed to keep the property’s historic soul intact.

CORRECTION: October 20, 11:42 p.m. This article has been modified to reflect that developers initially paid $3.6 million for The Mill on Etowah property.