First, the good news for Atlanta BeltLine patrons and proponents: Another section of the 22-mile loop is making concrete strides toward becoming a reality.

Less encouraging news: The Westside Trail’s Segment 4, spanning a crucial 1.3 miles, isn’t expected to open for public use until deep into 2025.

Atlanta Beltline Inc. is now officially seeking a contracting firm to build Segment 4, having published an invitation to bid. They expect construction on the final missing piece between existing Westside Trail segments and the connector trail into downtown to begin construction in early 2023.

Building the 1.3-mile trail could take up to 30 months, BeltLine officials said Thursday.

The most recent Westside Trail piece to open—the 1.22-mile Segment 3—was almost fully completed in about half that time, though for most of the route, it essentially acts like a wider sidewalk along existing roadways.

“Regarding complexity, we’re building both in and out of the old railroad corridor, which means addressing topographical challenges, building substantial retaining walls, and five new bridges, and realigning some streets,” Odom wrote via email. “We’re also trying to anticipate the continued stress points around supply chain and material availability.”

Once finished, Segment 4 will branch off the Westside BeltLine Connector and link the area around Donald Lee Hollowell Parkway with the Westside Trail section that opened five years ago in Washington Park. 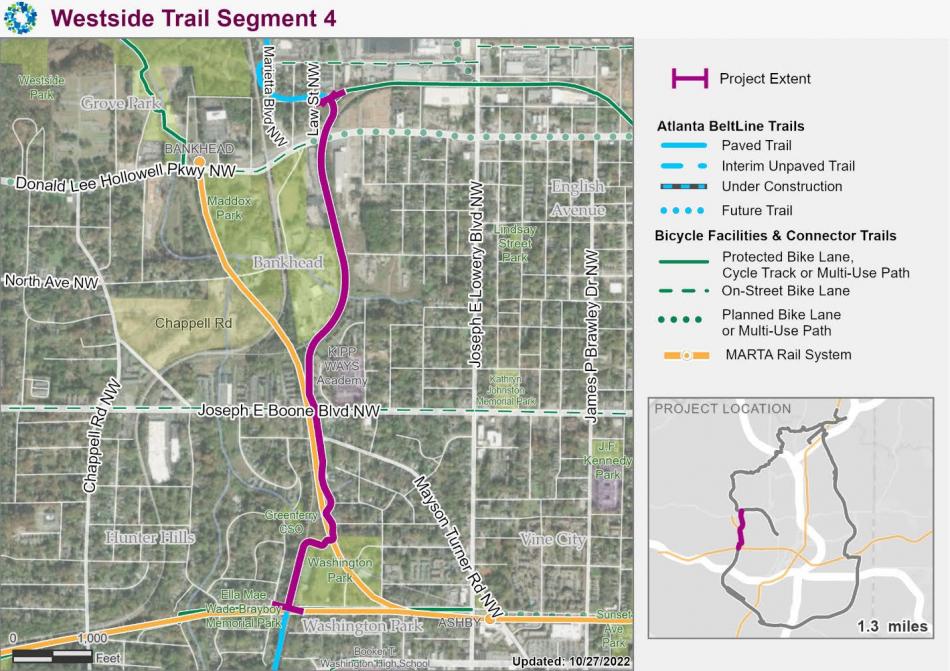 It means Atlantans will be able to safely roll, walk, or run for 6.5 contiguous miles of mainline BeltLine trail, stretching from Pittsburgh Yards south of downtown around to Huff Road, near the southern fringes of Buckhead.

The scope of construction will include a 14-foot-wide pathway, three-foot shoulders on each side, a fiber-duct bank, connections to adjoining streets, lighting, security cameras, and other elements.

Construction bids for the job are due November 14.

• Check out this stretch of Westside BeltLine, now finished, from above (Urbanize Atlanta)