Atlanta BeltLine Inc. is now officially seeking the right construction company to build a long-awaited section of trail that’s critical to connecting neighborhoods from the blocks around Zoo Atlanta up to Buckhead.

But according to revised estimates, it’s going to take more than two years to mobilize construction crews, build the infrastructure, and open that 1.2-mile piece of the Southside Trail.

BeltLine officials announced today they’ve published an Invitation to Bid for construction firms capable of taking on the job of building Southside Trail Segments 4 and 5. That’s an unpaved but publicly accessible (for now) corridor stretching between Glenwood Avenue down to Boulevard, just south of the city’s zoo. Along the way, the paved segments will help reconnect several neighborhoods, including Glenwood Park, Grant Park, Ormewood Park, and Boulevard Heights.

Officials expect construction of Segments 4 and 5 to begin “in the next several months,” once all pre-construction work that includes fiber relocation has wrapped. Challenging conditions at United Avenue (where a damaged bridge was removed two years ago, creating a trail gap) and at Ormewood Avenue could bump back the start of construction, BeltLine leaders cautioned this week.

Once construction does begin, the BeltLine estimates the trail will be completed within two years, barring any unexpected hurdles. 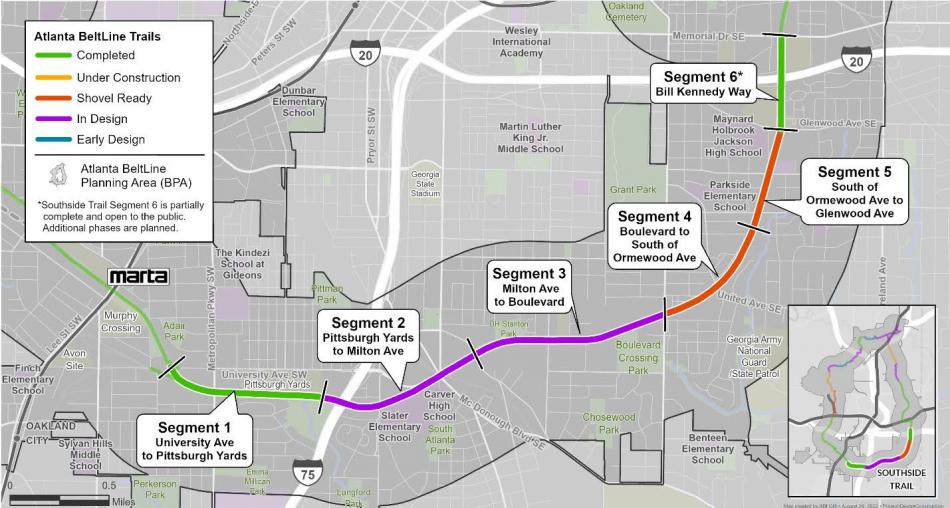 As with all new BeltLine sections, the second and third segments of the Southside Trail to be built from scratch will be 14-feet wide, with all lighting, landscaping, signage/wayfinding, accessibility upgrades, and connections to adjoining streets included.

For now, the unpaved trail between Glenwood Park and Boulevard will remain open to the public. It’ll be off-limits once construction begins. And yes, a replacement bridge at United Avenue is part of the next project’s scope.

Earlier expectations for Southside Trail construction haven't come to fruition, although the first new segment did debut a year ago this month.

Following the passage of the new Special Service District tax to help fund BeltLine construction, BeltLine officials estimated in April 2021 the Southside Trail portions between Glenwood Avenue and Boulevard would be closed and teeming with heavy equipment building the trail by early 2022. 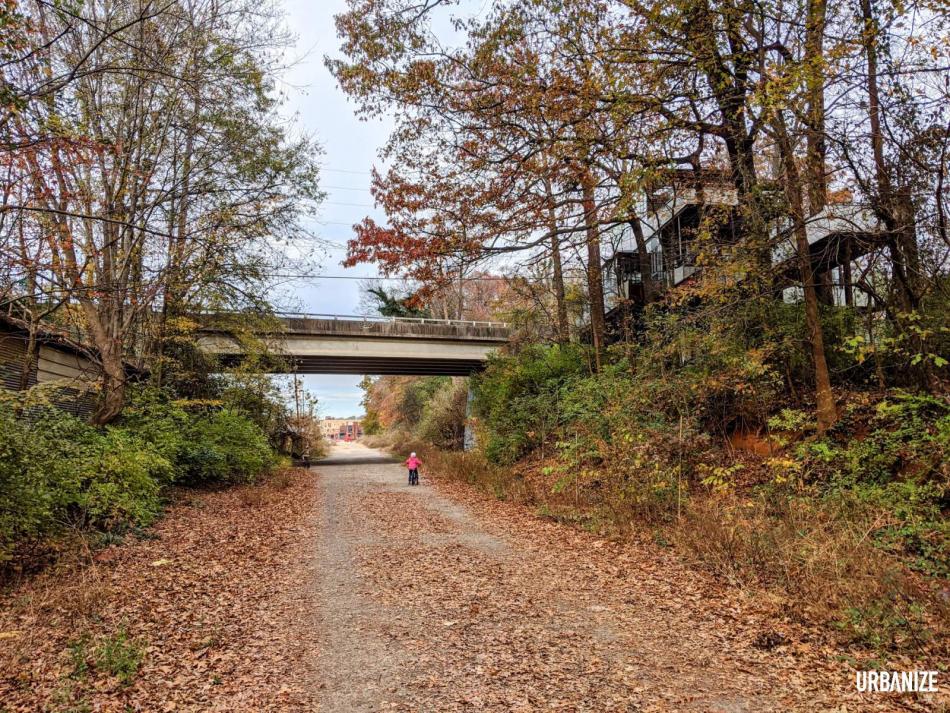 The remaining unbuilt sections of the Southside Trail—Segments 2 and 3, spanning 1.9 miles directly south of downtown—are scheduled to be bid for construction a year from now, in September 2023. Those segments, spanning between the Pittsburgh Yards jobs center around to Boulevard, are tied to federal dollars and federal-level construction processes, per BeltLine officials.

On a more optimistic note, BeltLine officials noted in a press release that 80 percent of the mainline trail will be either complete or under construction within the next two years.

The lone remaining piece is the Southside Trail’s Segment 6 on the southeast side of downtown, which crosses Interstate 20 and was opened in an interim state in May last year. BeltLine officials plan to solicit an engineering team this fall to design “a permanent trail solution for an improved trail experience” there. That means a separate trail bridge crossing the interstate, and revised links to that bridge on BeltLine sections both north and south of it.

Back in March 2018, the City of Atlanta and BeltLine leadership bought the four-mile, 63-acre Southside Trail corridor from train company CSX. TSPLOST funding approved by voters in 2016 made the $26-million deal possible, officials said at the time.

Anticipation for a BeltLine connection swooping across Atlanta's southside has been growing since.