Some homeowners, business leaders, and other residents in neighborhoods such as Inman Park and Old Fourth Ward are concerned that only one side of the story is being told regarding MARTA’s plans for extending downtown’s streetcar system to Ponce City Market via the BeltLine’s Eastside Trail.

Detractors “vehemently opposed” to plans for a new five-stop streetcar route, as unveiled by MARTA and BeltLine officials during two public meetings last week, tell Urbanize Atlanta that neighborhood chat rooms and Nextdoor pages are full of fury for light-rail plans they call outdated, “idiotic,” and in some cases, a total surprise.

“There is an uprising happening,” Old Fourth Ward resident Lauren Wheeler, who bought a townhome overlooking the BeltLine with her fiancé earlier this year, wrote in an email this week. “Everyone… agrees that this rail should be put in a more underserved community and not [on] the Eastside Trail.” 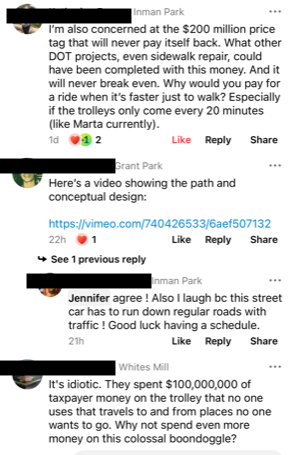 Streetcar extension naysayers in contact with Urbanize Atlanta feel blindsided by the proposal unveiled last week, in that neighbors and businesses, they argue, haven’t been consulted about specific plans for the route extension and exactly what the system would entail. Plans to use more cost-effective, overhead wires to power the streetcars are a particular sticking point; Wheeler and others call that an outdated technology that’s unnecessary, as proven by streetcar systems recently installed in other cities with more discreet powering systems.

“All we heard tonight is that the City of Atlanta and politicians are for this rail, so we will move forward unless politicians change that, which means we basically have no say,” Wheeler said following a meeting in Inman Park this week. “It’s a disgrace.”

MARTA says the downtown-to-Ponce City Market streetcar line should be fully under construction by 2024 and open for passengers in 2027. The process of community engagement began last week will continue in coming months, the agency says.

Another resident who wished to remain anonymous believes the streetcar extension’s projected ridership (about 3,000 patrons per week, according to numbers presented in recent meetings) and estimated cost ($200 million) mean its chances of being fiscally and operationally successful are low, per her understanding.

“It’s a losing financial proposition based on costs and ridership, and in no time in the foreseeable future will it have any significant impact on Atlanta congestion,” she wrote via email. “I can get behind transit on the BeltLine but not based on continuing with a failed transit system in place today in downtown Atlanta; and any significant capital project needs to be supported with sound financials and data as to how this project is of greatest value over other More MARTA programs. 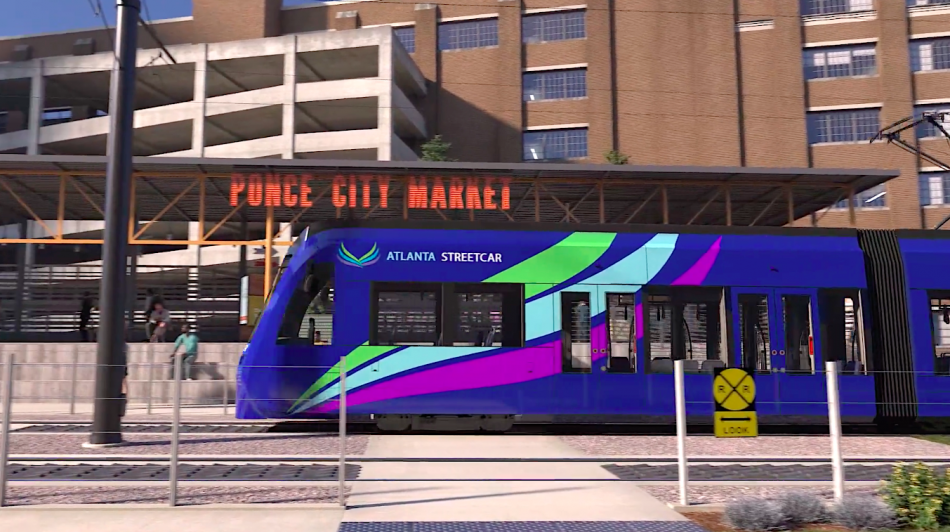 Where the streetcar would deposit passengers at PCM's The Shed, returning the outdoor facility to its original rail-focused uses. Kimley-Horn/MARTA 2040; via Vimeo

“We want to make sure that the city and MARTA seek out our input, listen to our comments and suggestions, and incorporate them to ensure BeltLine transit design is the least disruptive, aesthetically desirable, and pedestrian-friendly for those directly impacted and those who enjoy the use of the BeltLine daily,” she continued. “[Project officials] are conducting neighborhood meetings and updates, but they have yet to sit down with us. We with other neighborhoods are working on making sure that happens—but the city and MARTA should have already been doing that since they are 30 percent complete with design.”

The new streetcar line’s service would be provided in both directions, heading east from Jackson Street (where the current loop ends) along Edgewood Avenue. There, it would turn north on Randolph Street and Auburn Avenue, before entering the BeltLine corridor at Irwin Street and continuing north to Ponce de Leon Avenue. Five new stops are proposed in current plans. MARTA says the next step is a final design phase that’s expected to last into 2024.

To help gain a better understanding of the opposition’s position, Wheeler agreed to partake in a Q&A interview this week, which has been condensed for clarity and length below.

Urbanize Atlanta: How long have you lived near the BeltLine? Do you use it for transportation at all now, or exclusively recreation?

Wheeler: We bought our townhouse in March. We do not use the BeltLine for substitute transportation to a car. We would never drive to the places that we walk to on the BeltLine, so the theory that this will be used for commuting purposes just doesn’t make sense to us. I love utilizing the BeltLine [when] walking my dog, walking to restaurants, and biking up and down.

What were your thoughts on MARTA's presentations?

I joined the virtual presentation, and my fiancé joined the in-person presentation. We both feel like questions from the neighborhood were danced around and no direct answers given to the grave concerns our neighbors have about this project. The main questions revolved around funding and why the current design is relevant in 2022, as it was in 2016 [when voters approved the More MARTA sales tax to fund the streetcar extension]. It seemed the only answers were “this was decided on in 2016, and this is what must happen,” no exceptions for all the technology changes in 2022. 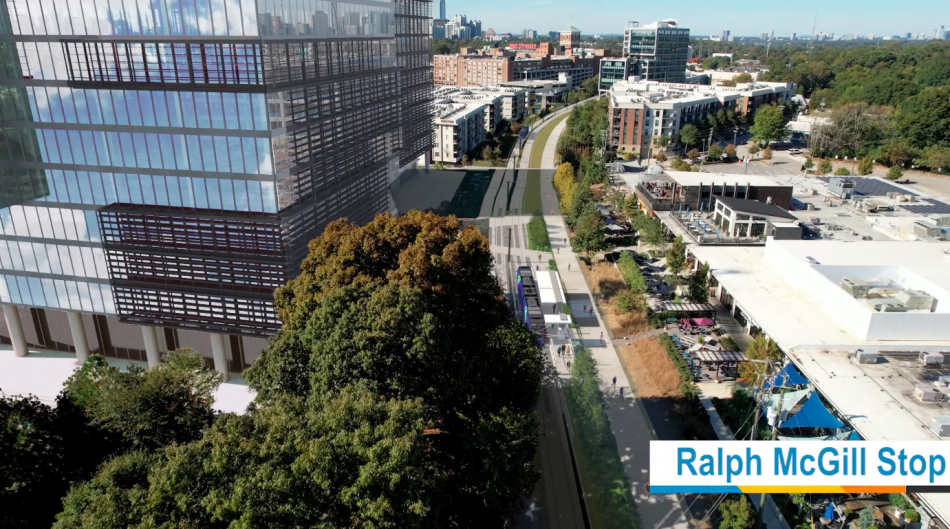 Have you always known that BeltLine rail could be a possibility, or is this all relatively new for you?

There have always been rumblings of this, but no definite funding. The entire BeltLine loop isn’t even completed yet, and they want to put a rail car on the most popular, wealthy, and successful part of the BeltLine. This has nothing to do with helping the community that needs it the most for transport.

Are you against expanding the streetcar in general? Or just as it would enter the BeltLine corridor?

This route does not make sense for the rail expansion. This will not help to get cars off the road. The rail runs with traffic. Why would anyone sit in a rail car in traffic when you can walk to most places this car goes?

If you'd estimate how many of your neighbors are also opposed to the streetcar BeltLine expansion, what would you guess that percentage would be?

Ninety-nine percent of our direct neighbors and the majority of surrounding neighborhoods I’ve seen. Many of the people who voted for this in 2016 probably have long moved away. It also isn’t clear what the exact ballot proposed in 2016 and if it was to demolish our current greenery on the BeltLine for a railcar. 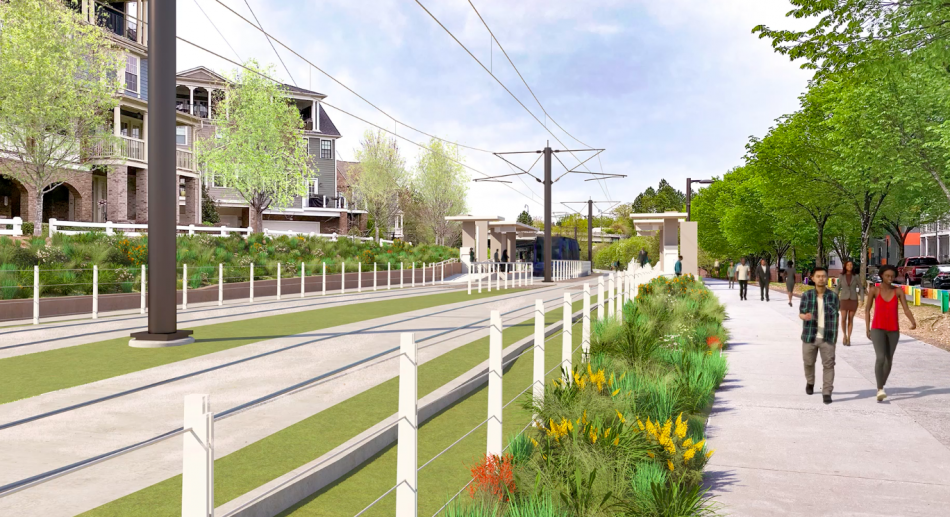 Lastly, what are your main concerns about the proposed expansion and how it could diminish your quality of life, if you believe it would?

I’m worried about the noise at the station proposed directly in front of our home. This is slated to run until 1 a.m. We are the only single-family purchased community on the BeltLine adjacent to where this project is slated to go. Our view will be blocked by wire cables running this outdated technology instead of the city investing in smart-car technology. The construction that they are saying will take three years will probably take five, and the funding could also run out. This will [negatively impact] our quality of life for years.

We planned to raise our family in this house, and now have to think about moving out of the area due to this rail. The graffiti, trash, and monitoring of this [streetcar line] is also a huge concern. The safety of crossing over for dogs, people, and children is a very high concern of everyone around.

More importantly, we’re worried that this will completely ruin the success of the BeltLine. I bet if you did a poll of walkers/riders on the BeltLine [to see] if they’re for or against, you will get the same statistic that 99 percent are against, but our politicians and council people have marked this as a done deal instead of listening to the community that they serve. Just because something was a good idea in 2016, does not mean the same idea is what will be a success six years later.