It won’t quite be ready for hordes of expected World Cup attendees in 2026, but the longer and more useful version of the beleaguered Atlanta Streetcar system could be operational not long after that.

That’s one key takeaway from the first of two MARTA presentations scheduled this week regarding the Streetcar East Extension project—an effort to expand the original 2.7-mile, 12-stop downtown loop to the BeltLine’s Eastside Trail and on to Ponce de Leon Avenue.

MARTA is ramping up public engagement efforts as it enters the final design stage for what would be the streetcar system’s first expansion since the current loop debuted nearly eight years ago.

Aside from connecting downtown dwellers to the wildly popular Eastside Trail, and the tourist attraction and jobs hub that Ponce City Market has become, MARTA says the new, longer streetcar system’s alignment would link people with existing MARTA stations, support five-minute walkability from key destinations, and boost last-mile connectivity on the eastside, among other attributes.

Service would be provided in both directions, heading east from Jackson Street (where the current loop ends) along Edgewood Avenue. There, it would turn north on Randolph Street and Auburn Avenue, before entering the BeltLine corridor at Irwin Street.

Five stop locations are proposed in current plans, as MARTA detailed this week.

Starting closest to the existing streetcar route, they would be where Edgewood Avenue meets Boulevard; where Auburn Avenue meets Irwin Street; and once in the BeltLine corridor, at Highland Avenue/Freedom Parkway; at Ralph McGill Boulevard; and ultimately at new platforms erected at the doorstep of Ponce City Market at Ponce de Leon Avenue.

Plans call for a cable protection system between the streetcars and BeltLine patrons on the Eastside Trail. [NOTE: A previous version of this article incorrectly stated the safety wall would be glass.]

Pedestrian crossings at key points—such as near Inman Park’s retail village, Historic Fourth Ward Park, and North Avenue—would also be installed over the rail lines, per plans revealed this week. 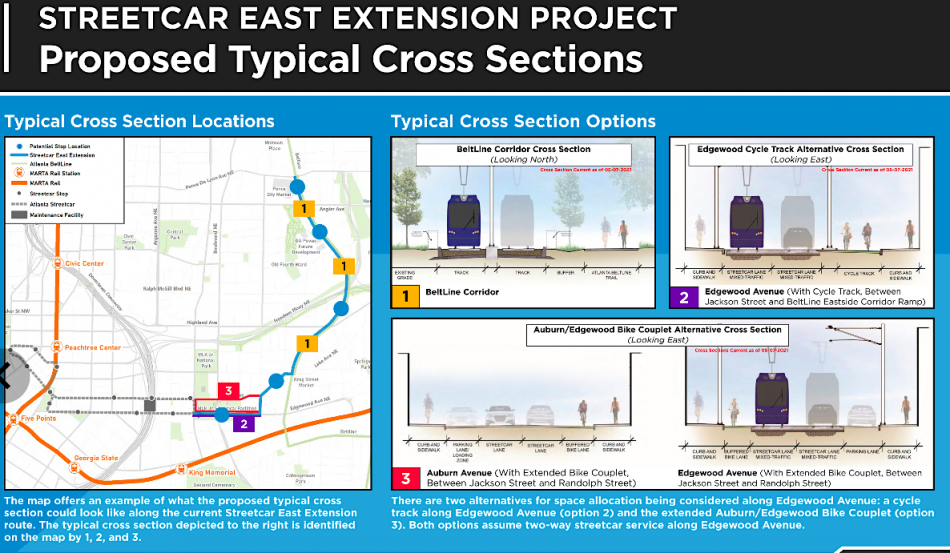 Atlanta voters approved a half-penny sales tax in November 2016—almost two years after the original streetcar loop had opened, well behind schedule and over-budget—to fund the streetcar expansion and other infrastructure improvements.

MARTA took over streetcar operations downtown and all plans for expansions in 2018. The agency has spent the intervening years studying earlier plans, conducting preliminary engineering studies, completing field studies, and beginning the process of community and stakeholder engagement, according to MARTA.

Next comes the final design phase, which is expected to last into 2024.

Between 2024 and 2027, MARTA expects the process of construction, testing, and commissioning of the new streetcar system to unfold. Sometime in 2027, according to the transit agency, the expanded system would open to the public.

MARTA is encouraging Atlantans to leave comments, view presentations, or register for a second virtual meeting at 6 p.m. this evening here. In the meantime, see key images from Monday’s presentation in the gallery above.