If the Atlanta BeltLine loop was a clock face, the Northwest Trail would be roughly 10 o’clock around to 12:15.

As planners have long known, it’s the most difficult BeltLine section to work with, as there’s no dedicated, abandoned railroad corridor to determine the route—only land that needs to be acquired and pathways negotiated. Vocal pushback from some Buckhead neighborhoods and residential communities has further complicated matters.

At a meeting hosted by Atlanta BeltLine Inc. and partners the PATH Foundation, two corridors were publicly selected to move into design phases that will represent a majority of the Northwest Trail. The alignment for another piece just east of Bobby Jones Golf Course—a source of contention among some neighbors—will require further study, officials said.

Once finished, new pieces of the Northwest Trail will total about four and ½ miles. (In between is the Northside Trail section near Piedmont Hospital that’s been open for more than a decade.)

For context, that’s a bit longer than the length of today’s contiguous Westside Trail, plus the first open segment of the Southside Trail, combined. That stretch spans from Washington Park, directly west of downtown, around to almost the Connector, south of the city.

As if all the above isn’t brain-twisting enough, the Northwest Trail has been divided into five segments. The preferred route for all but one of those has been picked.

Plans along a channel leading to Tanyard Creek in Buckhead. Atlanta BeltLine Inc.

Seven different corridors had been on the table, each evaluated based on ease of construction, feasibility of acquiring real estate, equity, the quality of experiences for trail users, and a bank vault’s worth of 2 cents collected during more than 20 public meetings, per BeltLine officials.

The official study kicked off about a year ago.

Let’s start with plans for the westernmost section—directly west of, say, the Westside Provisions District with Room & Board furniture and Ormsby’s bar. 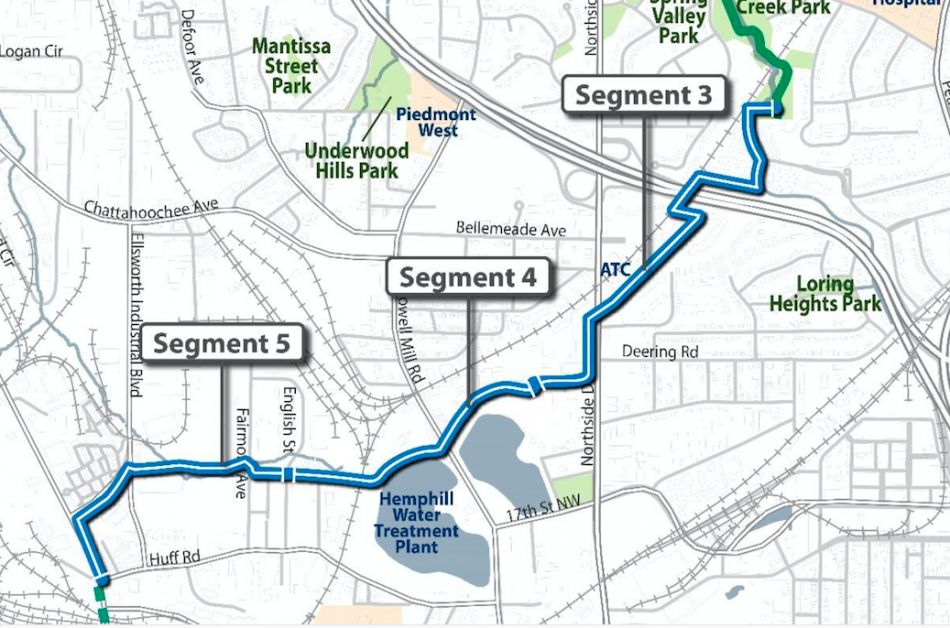 The selected BeltLine corridor will run from the point where the under-construction new Westside Trail segment ends, where Huff Road meets Marietta Boulevard.

From there, the 2.8-mile section will traverse the northern part of the Hemphill Water Treatment Plant, cross Howell Mill Road and Northside Drive, then head northeast, snaking under Interstate 75 and along a section of Tanyard Creek until it meets up with the aforementioned Northside Trail in Ardmore Park. Make sense?

The eastern leg of the Northwest Trail is a bit more TBD. Except for a prioritized route called Segment 1 where all studied corridors overlap, between the Peachtree Park Apartments and Kinsey Court.

The three potential pieces nearest Bobby Jones Golf Course—those are all still up for debate. BeltLine and PATH Foundation heads expect to make a decision this summer on the preferred alignment there.

The ultimate goal is to connect the existing trail that loops the golf course around to the growing Northeast Trail near Lindbergh, which then trickles down to Piedmont Park.

All of the selected segments will now more forward into design and engineering, per BeltLine officials. The full 22-mile loop is expected to open before a 2030 funding deadline.

Planned trail positioning at the entrance to Atlanta Technology Center near I-75. Atlanta BeltLine Inc.

How the Northwest Trail would duck under I-75 near Atlanta Technology Center. Atlanta BeltLine Inc.

Footing the bill for Northwest Trail construction will be the BeltLine Tax Allocation District, tax proceeds from the Special Service District approved last year, and philanthropic gifts, including $30 million recently donated by the Cox Foundation.

• When it comes to Buckhead BeltLine, has Nimbyism run amok? (Urbanize Atlanta)