Where Boulevard meets Edgewood Avenue in the ever-changing southern blocks of Old Fourth Ward, the roar of heavy equipment and cacophony of construction bangs, beeps, and clatters today paints a stark contrast from one year ago.

On the first day of December 2020, the western wall of a two-story brick structure that’s stood for roughly 100 years at 483 Edgewood Avenue visibly and loudly cracked as builders worked nearby, sending panic around the block. A day later, the 12-inch-thick wall crumbled, exposing two stories of liquor bottles and stylish wooden seating where the Sound Table, a pioneering Atlanta cocktail lounge, had done business for a decade.

With the entire building in danger of falling over, it was anything but. 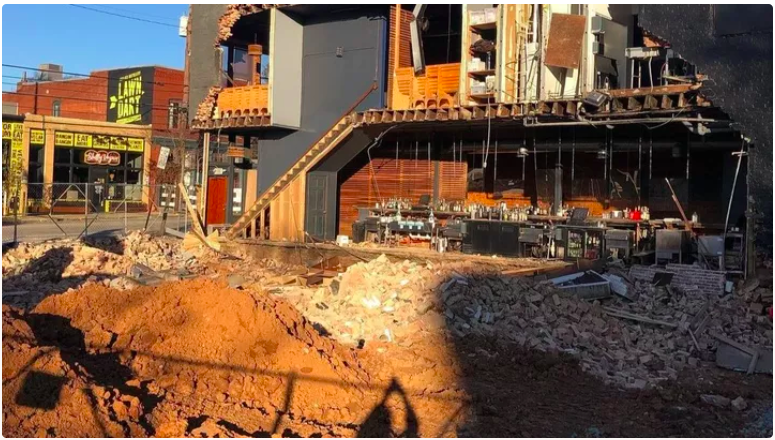 The wall collapse exposed the interior of Johnson's Edgewood Dynasty restaurant days before its planned opening and rendered the property off-limits due to safety concerns. Courtesy of Greg Johnson

The collapsed wall put ambitions for three different projects on hold and cost one company a lucrative contract, according to sources familiar with the situation. A year later, as construction barrels ahead at the larger ventures and a lawsuit lingers, Johnson—a former U.S. Air Force major and disabled Gulf War veteran—says the ordeal is the hardest thing he’s ever dealt with.

And the situation, as he sees it, has no clear solutions.

Johnson and his wife had long dreamed of opening the supper club, with a business next door called Cake Social Bar, as a communal gathering spot. His daughter has aspirations of being a chef and had moved from Seattle to cook at Edgewood Dynasty.

Though his landlord rebuilt the wall, Johnson says the cost of rebuilding and preparing the businesses to open again—increased by labor and supply shortages—has exceeded his insurance claim coverage and required personal loans to cover. Almost $200,000 from the federal Restaurant Revitalization Fund that Johnson was counting on never arrived. Finding the right attorney to take his case has been hard, Johnson says, as it’s difficult to prove losses for businesses that never managed to open. A GoFundMe account launched a day after the collapse raised just $9,500 toward its $25,000 goal.

“This has been a very emotionally and financially draining situation,” Johnson recently told Urbanize Atlanta. “This event put many people’s lives on hold.” 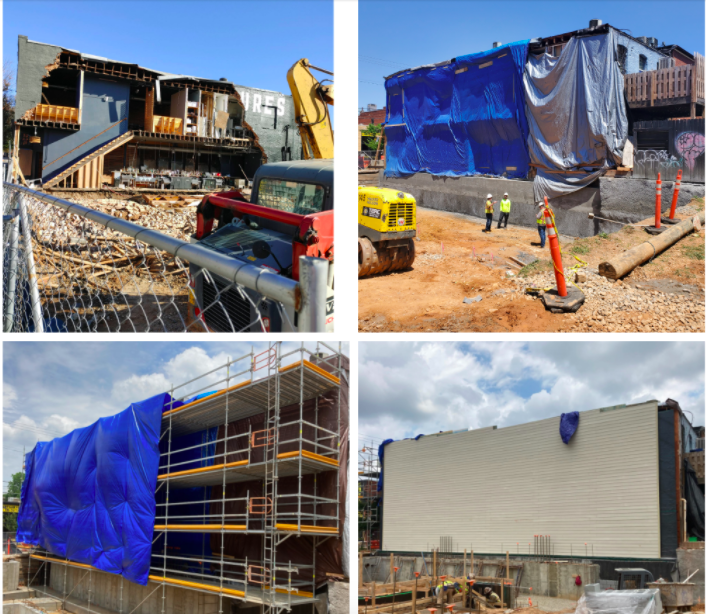 The wall in question following the December collapse and in various states of repair. Courtesy of Greg Johnson

The old brick building on Edgewood Avenue, as of early last December, was surrounded by new construction. Global pandemic or not, development in Atlanta had hardly paused.

Unlike Johnson, Winter Construction Company, the former general contractor for Waldo’s Old Fourth Ward—an $80-million mix of hotel rooms, office space, retail, and townhomes next door—is pursuing legal action. And through attorneys, they’ve requested Johnson’s assistance via subpoena. He calls that “despicable and outrageous” because he feels Winter’s construction process caused the wall collapse, at least partially, in the first place. He’s not alone in that opinion.

Winter, meanwhile, is attempting to pin blame on the construction project to the immediate west of Johnson’s restaurant endeavor.

That’s where Trident Construction Group is building a four-story mixed-use venture on a former Sound Table parking lot that will house the flagship store for A Ma Maniére, a high-end urban apparel retailer.

According to Winter’s lawsuit, Trident failed to properly shore the brick façade on the wall that collapsed while excavating next door.

As a result, per Winter’s suit, the wall cracked and failed, rendering the building unstable and triggering a “stop work” order that slammed the brakes on progress at Waldo’s next door. Winter’s attorneys have asked for damages to be paid in an amount determined in court.

“Winter had no role in the collapse,” Henner & Scarbrough attorney Karen Bain said in an email.

She supplied a Department of City Planning inspectors report filed on December 8 last year but declined to comment further.

In that report, a city inspector deemed the entire building unstable, noting, “… within the footing area of the collapsed wall, the soil has been excavated; including the bearing soils of the wall, as a result the footing and foundation failed and the … brick wall collapsed.”

But Jay Wicklund, Trident’s president, calls that report a hasty assessment of a complex situation compiled after just a short time on site.

In response to Winter’s lawsuit, Trident’s attorneys deny any responsibility for the collapse and ask that claims be dismissed and attorney’s fees covered. The filing paints a vivid picture of what Trident says actually happened around 12:15 p.m. on December 1.

Winter had set up a large hydraulic pile-driving rig about 100 feet from the former Sound Table building to install shoring for the Waldo’s project’s parking deck. On the afternoon in question, Winter began driving a pile near the property’s northern boundary “sending seismic vibrations throughout the area” and causing the former Sound Table building and others in the area “to vibrate and shake,” per the filing.

Trident workers and occupants of the forthcoming Edgewood Dynasty restaurant rushed to warn Winter’s crew that the building was shaking and asked them to stop—but the warnings were ignored until the wall cracked “with a loud boom” at about 12:30 p.m., according to Trident’s attorneys’ response.

Representatives of the Waldo’s project declined to comment for this story. But according to Trident’s Wicklund, Winter has been replaced on the Waldo’s job by another general contractor, Schnabel Engineering, that uses a different method of installing parking deck shoring. 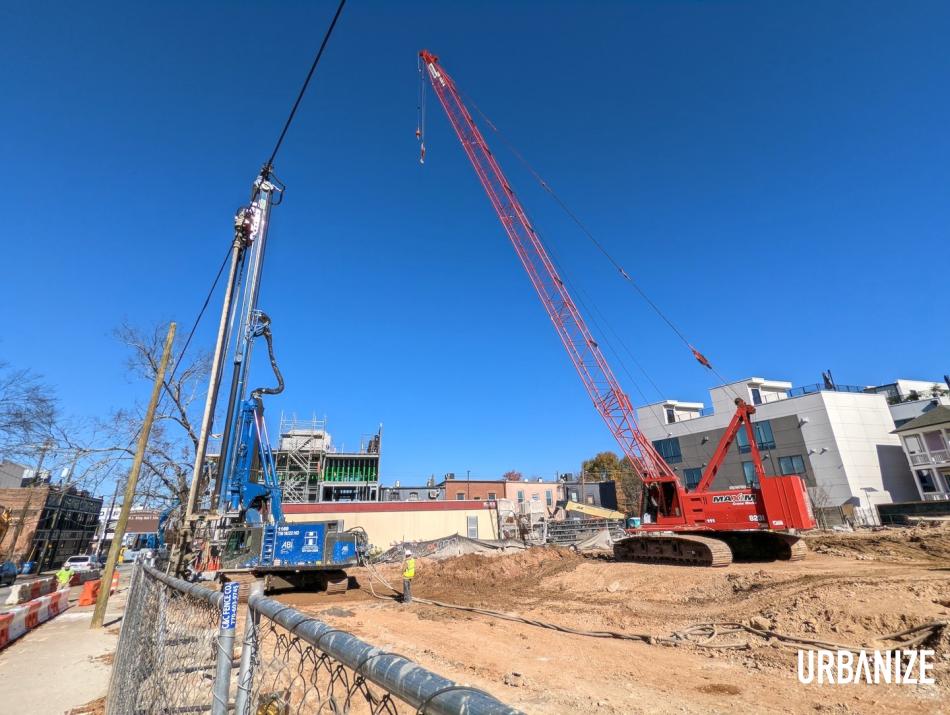 Where piles for a Waldo's parking garage are being drilled into place now. Josh Green/Urbanize Atlanta

“You can draw your own conclusions from that, as far as what the story is,” Wicklund said in a phone interview. “The piles aren’t being driven by a large hammer now—they’re being drilled. Amazingly, the ground’s not shaking now.”

In October, Winter’s attorneys served Johnson with a subpoena demanding he turn over all documents related to the collapse within two weeks.

Johnson objected to the subpoena, declined to cooperate, and all but lost his cool.

“This feels like I got rear-ended while stopped at a red light,” Johnson said at the time. “And the driver comes running at me with 15 lawyers demanding to see my driving record, texts, emails, and bank account. Rather than inquiring if I'm okay and if there’s anything they can do to help.” 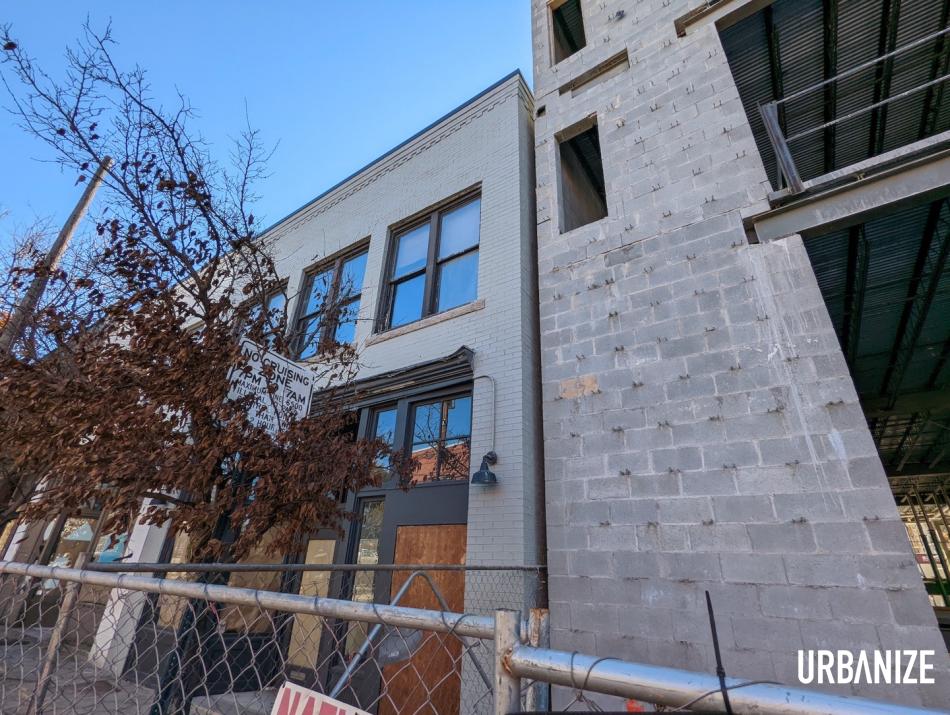 Where the case will go next isn’t yet clear. “We’re just kind of waiting on the courts to process all the various requests that have been submitted,” said Wicklund last month.

Johnson says he doesn’t absolve Trident of responsibility and feels their “poorly devised method of excavating, rather than reinforcing the foundation in small parts” may have contributed to the wall’s failure. Trident’s counterclaim to Winter's attorneys does note the century-old foundation was made of clay and not concrete.

As for the future, Johnson says interior work at Edgewood Dynasty should be finished by December 20, while further interior construction at Cake next door is awaiting city approval and permits. 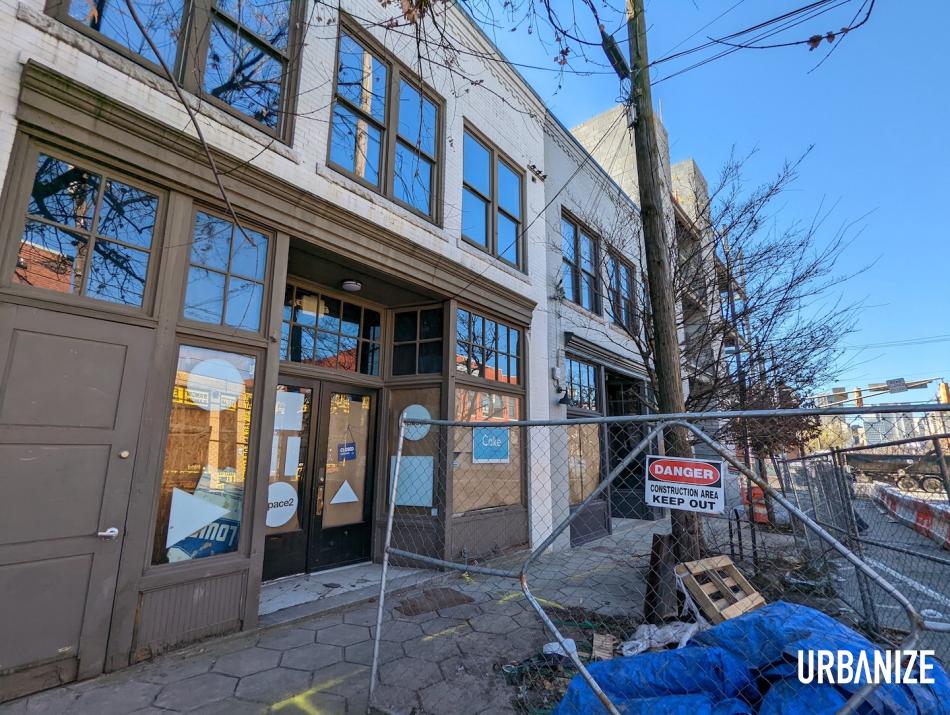 Johnson acknowledges that the neighborhood’s rapid expansion, being blocks from the Atlanta BeltLine and attractions like Dr. Martin Luther King Jr.’s birth home, is the cause of his woes for now, but also a source of hope for his businesses’ prospects.

“There are good days ahead,” says Johnson. “I remain dedicated to rebuild and come back better.”