The Atlanta City Council voted Monday to approve an expansive slate of projects for a renewed, five-year TSPLOST (transportation special purpose local option sales and use tax) and infrastructure bond. But what could those measures really do for the city?

Top of the TSPLOST 2.0 list, as it's called, is redesigning streets to be friendlier to more than just car users all over town, the legislation’s supporters say.

Unlike voter-approved funding tactics that have fallen short of expectations in the past, the 2022 infrastructure package would not require tax increases—but an extension of current taxes. Existing tax revenues will foot the bill, should voters approve next year, according to the city. 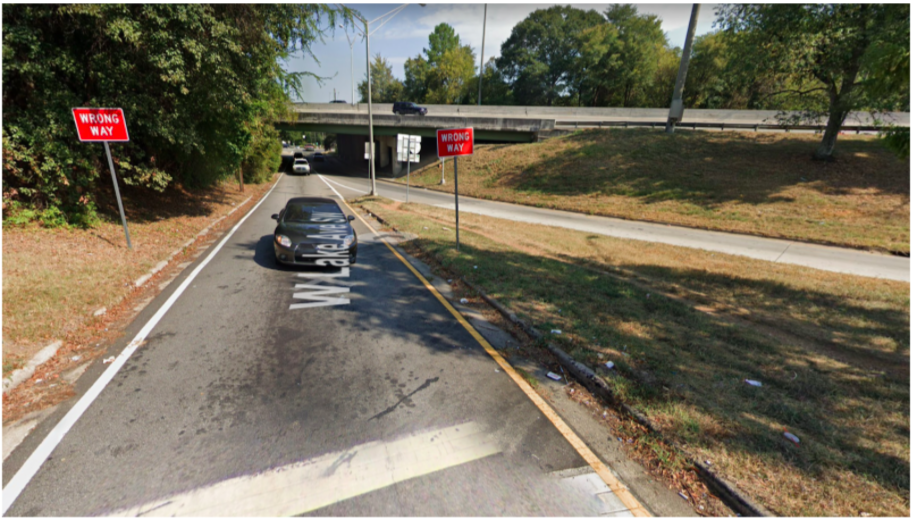 An example of an area in desperate need of sidewalks that would be addressed with the renewed TSPLOST funds: West Lake Avenue.Google Maps

In Midtown, the 10th Street bike lane would be extended with a “‘low stress”’ bikeway on Peachtree Place, and Peachtree Street would see a “‘safe street”’ makeover. (Exactly what the Peachtree Street work would entail isn’t specified, but it would cover 2.6 miles and cost about $9.7 million.)

Buckhead’s Lenox Road would get a multipurpose path, and PATH400 on Sidney Marcus Boulevard would finally link to Lindbergh.

Another major focus would be expanding and repairing Atlanta’s sidewalk network to the tune of $102 million. Familiar corridors pop up on the list here: Campbellton Road, Cleveland Avenue, Marietta Boulevard, Northside Drive, and a whopping $10 million for sidewalks on Browns Mill Road.

Among the other prominent line items are $10 million for strategic traffic calming (speed bumps, tables, and “‘cushions”’); a total of $25 million for bridge repair, including emergency funds for Cheshire Bridge Road fixes; bus shelters and other bus rider improvements; and cash for a combination of PATH/BeltLine links, including $1 million to help with Southside Trail implementation, and nearly $3 million for the Eastside Trolley Trail in Reynoldstown and Edgewood, which at last check was expected to break ground early next year. 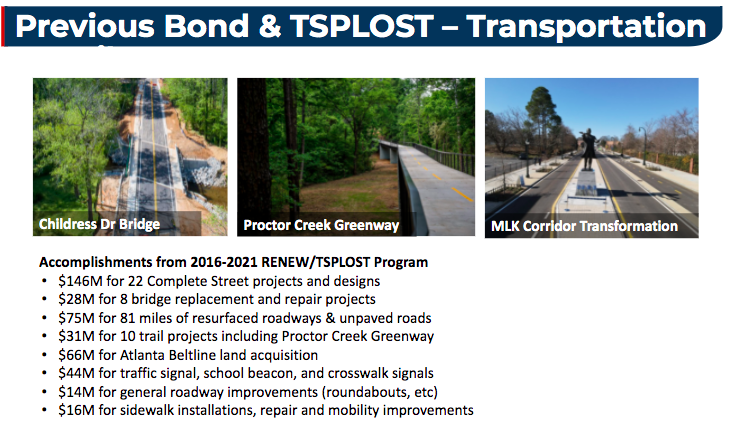 A city presentation touts accomplishments of the previous TSPLOST program. Curiously missing from the list is the pedestrian bridge over Northside Drive.City of Atlanta

So a total of $700 million in fixes could be on the way—if voters should trust city leaders enough to approve of such measures like it’s 2015 and 2016 again.

Prior to the current administration, Atlanta voters approved two funding initiatives in the same vein—Renew Atlanta and another TSPLOST program—that have produced impactful transportation and recreational upgrades across the city, with others in the works, but have fallen drastically short in many cases.

For further reading on the bond infrastructure projects and TSPLOST 2.0—with handy maps—head over here.