An affordable housing renovation project on Atlanta’s Westside is nearly leased up after providing what its backers call an innovative new model, modern accommodations for relatively low rents, and a source of pride from what had long been a community sore spot.

For nearly 20 years, the largest complex by unit count in the Hunter Hills neighborhood languished as a vacant eyesore and haven for criminal activity in the 1200 block of Mobile Street, according to affordable housing developer Richard Taylor, a managing partner with ARRC Capital Partners.

The property includes two apartment buildings, totaling just shy of 12,000 square feet, built in 1960 in Hunter Hills—one of Atlanta’s few planned Black communities of its time and a magnet for both blue and white-collar homeowners beginning in the 1940s. Its location held promise, being about two blocks west of a planned extension of the BeltLine’s Westside Trail and less than a mile from both the new Westside Park and Microsoft’s future campus at the former Quarry Yards. 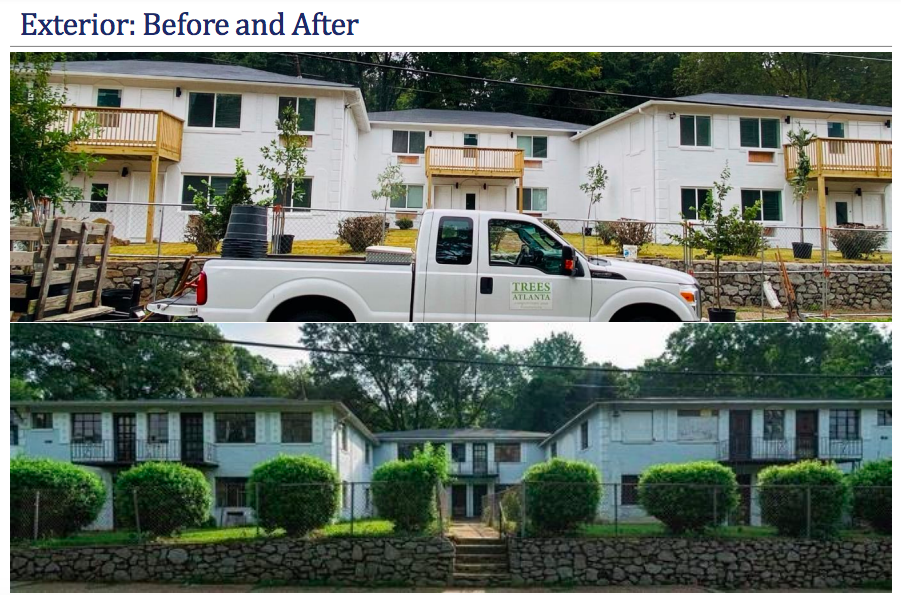 The contrast of the overhauled property before and today, prior to the addition of exterior art. Courtesy of ARRC Capital Partners

ARRC teamed with developers Alexander Goshen and Tenth Street Ventures, a veteran of older apartment renovations in places like Buckhead and Midtown, to turn the crumbling, garden-style rentals into a creative example of attainable rentals that salvaged the complex’s bones. They closed on the property in April 2021 and began renovations soon after.

The result is 12Hundred Studios, a project that doubled the number of housing options (from 20 to 40) by reconfiguring apartments into 40 micro units that live like efficiency hotel rooms, only with couches that transform into Murphy beds and washer-dryer combo units.

Backed by financing at below-market rates from Atlanta Affordable Housing Fund and American South Real Estate Fund, the $4-million project has been able to stay 100 percent affordable, with no government subsidies, for anyone earning 60 percent of the area’s median income or less, Taylor said.

It opened for leasing in May and is expected to be 90 percent full within the next week.

“Two of the biggest drivers of crime are vacant properties and [nonfunctioning] streetlights, and we fixed both of those things,” Taylor wrote in an email to Urbanize Atlanta. “Additionally, small investments in communities can give residents who feel ‘forgotten’ a sense of pride.”

With an average of roughly 250 square feet, the 12Hundred Studios offerings won’t take flak for being gratuitously large.

But the rents of $1,012 monthly include basically everything a tenant would need (besides utilities), taking “fully furnished” to the level of a highly rated short-term rental. The television, bedding, towels, washer-dryer, and even plates, glasses, and silverware are all included. The goal is to create a seamless move-in, move-out experience that eliminates costly moving expenses.

Taylor describes the finishes as “undoubtedly the most modern and updated on that side of town.” 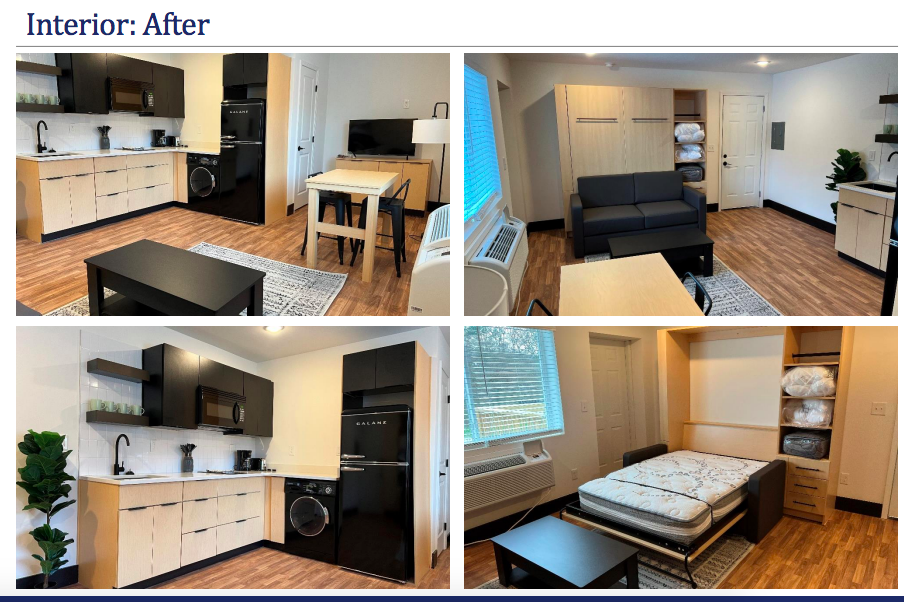 One of the roughly 250-square-foot interiors today. Courtesy of ARRC Capital Partners

Tenants so far have included police officers, after developers partnered with the Atlanta Police Foundation to naturally introduce more police into the area. Taylor said his team has also partnered with Open Doors, and is seeking another partnership with HomeFirst, to help support people both exiting and experiencing homelessness.

Anyone earning around $49,000 or less annually would qualify for the apartments, project officials said last year.

Beyond the units themselves, the property includes productive fruit trees recently planted by Trees Atlanta, a gazebo, and eye-catching murals by local artists selected by Hunter Hills neighbors.

Earlier this year, 12Hundred Studios won CoStar’s “Community Impact Award” for “Best New Multifamily Development in Atlanta,” and it was cited by former Mayor Keisha Lance Bottoms as a project that exemplified her legislative priorities.

“Neighbors especially appreciate what it has done for their community,” Taylor noted, “and how they were able to insert their inspiration into the community murals.”

Head to the gallery above for a fuller picture of where the 12Hundred Studios project began and what it offers today.