Just west of Atlanta’s Interstate 285 loop, the unincorporated township of Periwinkle approved an ambitious parks and recreation concept on Thursday despite stiff opposition from a long-tenured councilmember who expressed concerns with the project’s design.

The 35-acre property in question, located near the western edge of Fulton County, is largely untouched forestland recently bequeathed by the family of entrepreneur Ronald J. Holmes to the Periwinkle Parks Enhancement Foundation. A decade’s worth of donations to the foundation would cover the park’s estimated $12.6-million design and construction costs, distributed in the form of a municipal charity grant.

Periwinkle’s four-member council approved the plans this week 3-1, following robust discussions that largely concerned a system of paved, multi-use paths that would form the park’s perimeter—and a long, arching bridge elevated above the canopy in the southwest corner.

The project’s working title is West Atlanta Natural Greenspace, or WANG, to reflect its preservation goals. The property borders the parking lot of a Bristle Road Waffle House, a 1980s subdivision, a Waffle House distribution center, and the site of a planned Waffle House Express to the south. 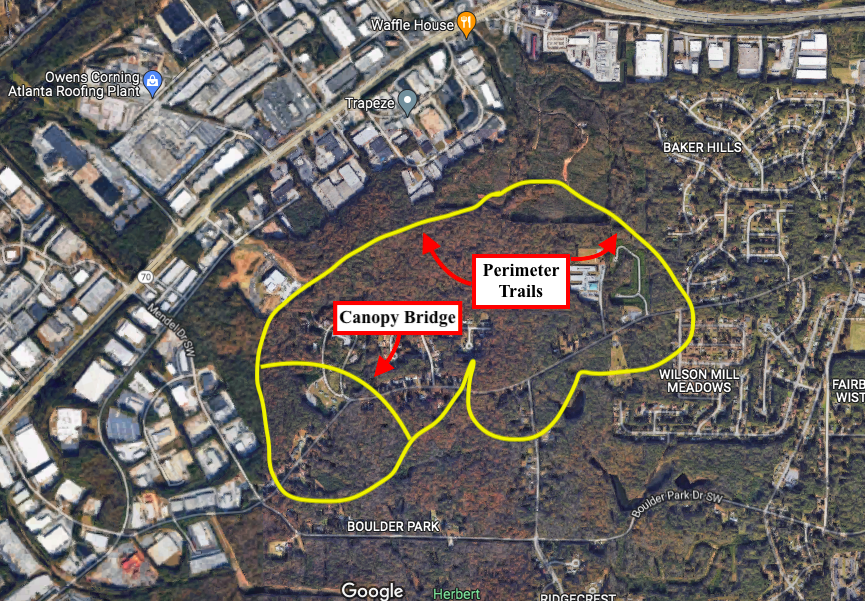 The park was the lone March agenda item for the Periwinkle council, and discussions were held in the auxiliary building of the township’s baseball field, with a single reporter in attendance.

The lone dissenting councilmember, Ed Freeman, is a commercial airline pilot by day. He expressed concerns the park’s proposed acronym is “tragically accurate,” and that the 16-foot-wide trail design around the park’s rim could make “Atlanta the laughingstock of the Southeast, at least for pilots approaching from the west,” though he didn’t elaborate.

Freeman treaded lightly with his criticisms, as all other councilmembers, as he noted, are devout Periwinkle clergy members.

As a cost-saving measure, Freeman said, the council should consider eliminating plans for the “suggestive, head-like bridge” connecting two trail sections at the park’s corner. Doing so would save the township approximately $3.5 million and “untold reputation damage,” the councilmember opined.

“Is that your main concern?” council president Harry Musgrave asked at one point, pointing and visibly agitated. “I personally applaud the canopy bridge. But councilmember Freeman seems stuck on this southwest quadrant of the project—right down there, just the tip.”

In response, Freeman left his seat at the foldable council chamber desk. Without verbally communicating, he stood beside a WANG placard and circled its outline with his hand while trying—unsuccessfully, for a brief moment of discomposure—not to laugh.

Nonplussed, council secretary Margaret Cartwright reminded her colleague that nearly $13 million in public funding is no laughing matter. She countered that the park’s design reminded her of a “beautiful amoeba” or a “happy little dog, peeking over a fence.”

In a final act of defiance, Freeman threatened to resign from the council—and to stop servicing airline routes anywhere between Birmingham and Tallahassee—if the parks and recreation proposal passed as designed.

Still, Freeman was overruled; after the 3-1 vote, he stormed out of the chambers, slapping a portable concession stand near the exit.

Following the meeting, the council’s longest-tenured member, Ethel Jackson, 86, criticized Freeman’s behavior in an interview. She conceded the park’s design “looks a bit like Atlanta’s cock and balls” but argued it’s no reason for Freeman to be such a baby about everything.