The vision for a vibrant “Government District” downtown didn’t make the biggest splash, but it did have legs, and for a while, it made noticeable progress.

Now, as private investment floods into the oldest sections of downtown, some city leaders are wondering if the timing is right to dust off those plans and put them into action.

Quick history: In 2017, the final year of Mayor Kasim Reed’s administration, the Atlanta City Studio put together a proposal to clean up, activate, and enliven the areas around the Georgia State Capitol and Atlanta City Hall specifically.

The goal, more broadly, was to begin stitching together and creating a synergy with all the development planned around the City Hall area, but not happening within it, leaving a sort of donut hole’s dearth of investment. That included everything from Carter’s reimagining of Summerhill, to Underground Atlanta’s revival, CIM Group’s mega-plans for the Gulch, and even the long-discussed but not-implemented Memorial Drive Greenway concept. 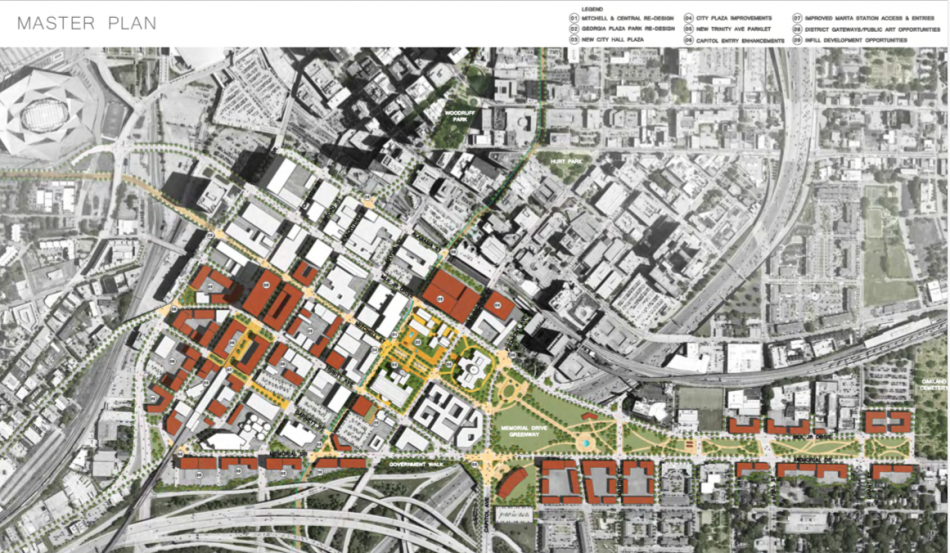 “We acknowledged the issues we were facing, which includes not a great mix of uses, because that part of the city is predominantly government offices,” Tim Keane, the city’s planning commissioner, tells Urbanize Atlanta. “[There’s] not a lot of retail, residential, and not a lot of people living there. We wanted to start in small ways, but with the goal of concentrating on making that a more vibrant, urban part of the city.”

Phase one unfolded, focusing on smaller details: repairing sidewalks, cleaning up vacant storefronts where possible, installing art pieces and planters, painting some utility boxes, and hanging baskets to beautify street lights. Movies were shown at night in a state-owned plaza across from city hall. More noticeably, a food truck program was implemented around City Hall and the Gold Dome, successfully drawing people out of their offices at lunchtime.

And then, a global pandemic. Shuttered offices and shops. Closed homeless shelters. 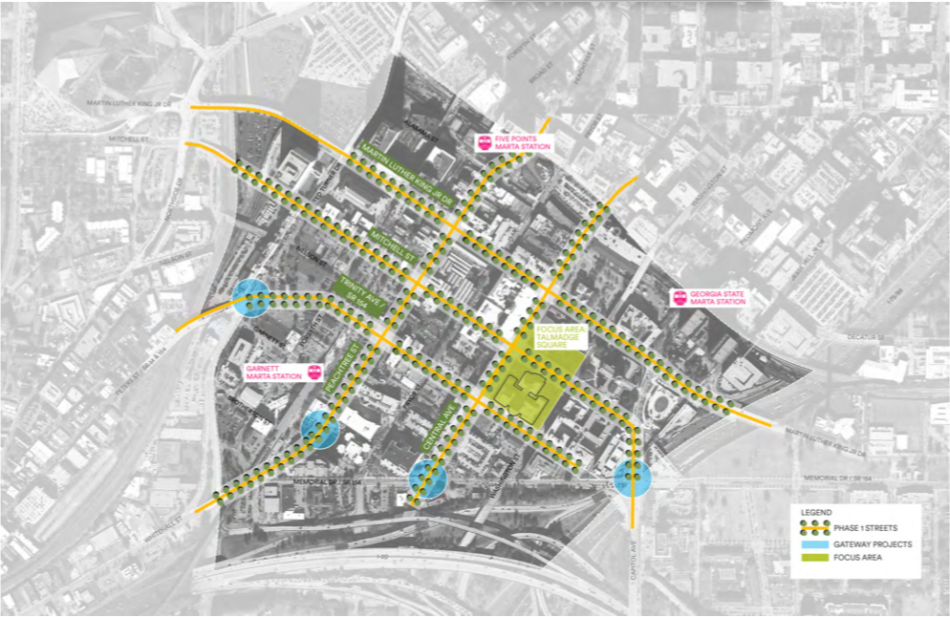 But more recently, as projects such as Newport’s Hotel Row have begun noticeable construction, and the first pieces of Centennial Yards come online, the Government District concept is beginning to seem more viable, says Kevin Bacon, Atlanta Office of Design director, whose Broad Street offices in South Downtown are in the middle of it.

Broken down into five zones immediately around City Hall, the study looked to places like San Francisco’s Sunset Parklet and Dallas’ Klyde Warren Park for inspiration. 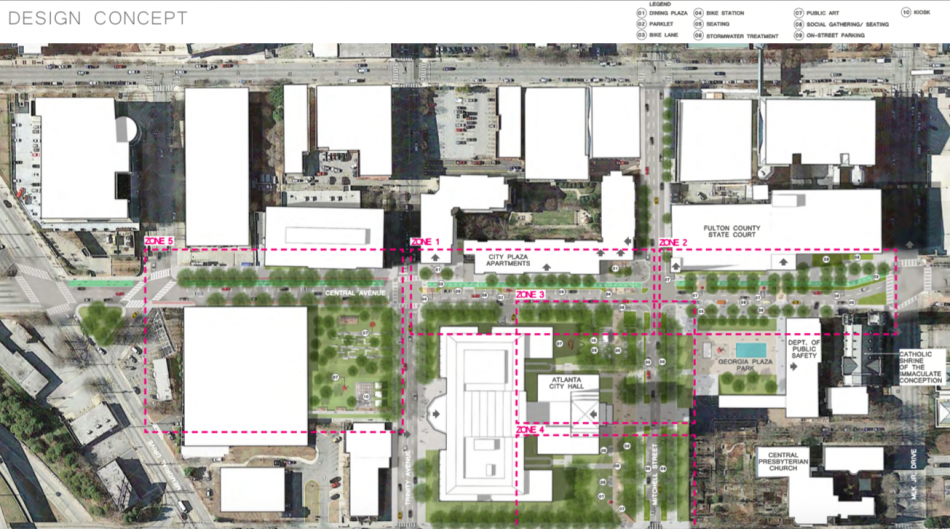 The five downtown zones in question, with legend. Courtesy of Atlanta City Studio/Department of City Planning

“With [developers] getting to a point where they’re beyond acquisition and predevelopment and getting into bringing new things online and bringing people back to downtown, we want to realize some public space improvements, and really start to knit some of this together,” says Bacon. “The idea is that public space throughout downtown needs this improvement, this investment, that matches the private effort.”

Keane says it’s crucial the city, county, Atlanta Public Schools, and other agencies with offices in the area work together to make it function as more than "a series of parking lots and parking garages connected to offices.” 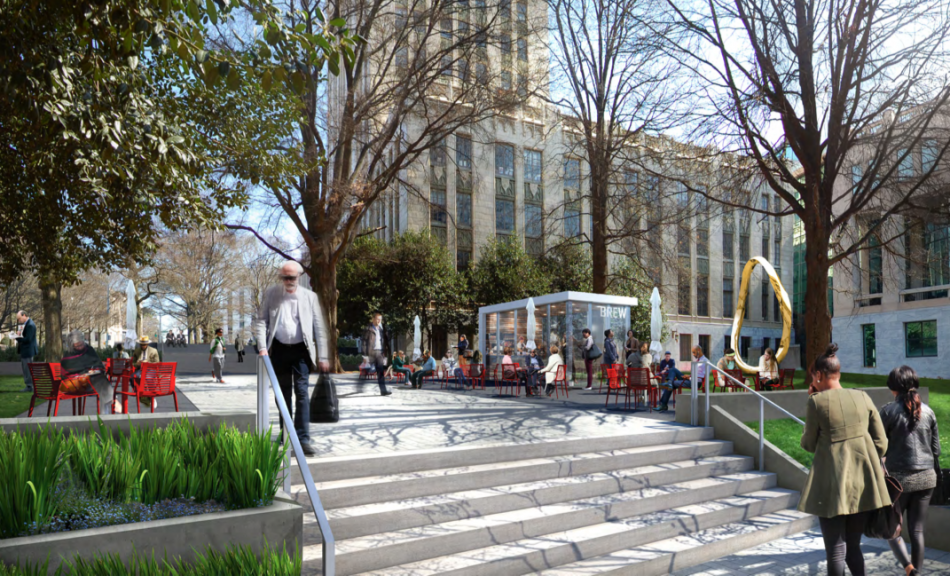 How a new dining plaza could look outside City Hall. Courtesy of Atlanta City Studio/Department of City Planning; designs, Perkins & Will

One positive outcome, says Keane, is that the study convinced city leaders to offer a 1.3-acre parcel in front of City Hall for development as housing, including an affordable component. Developers have until October 13 to respond to a request for proposals issued last month.

“Previously [the property] was going to be a park or open space,” says Keane. “In our process of looking at it, we said, ‘Why do we need another open space? We’ve got open spaces everywhere. We need more people living here, walking around.’”

In a way, the Government District would build off the momentum of what’s happening around commercial nodes in other parts of Atlanta—most notably, 17 parklets installed in former parking spaces, as of August. No recent talks about funding have occurred, but as the light at the end of the pandemic’s tunnel brightens, Keane wonders if maybe those discussions should resume.

“We really haven’t concentrated on this part of the city, because there’s not that many people there,” says Keane. “But that will come back. It won’t be long before employees are back to City Hall, at some point the public will be back to the offices there. There will be the makings of realizing the potential of this most urban part of the city.” 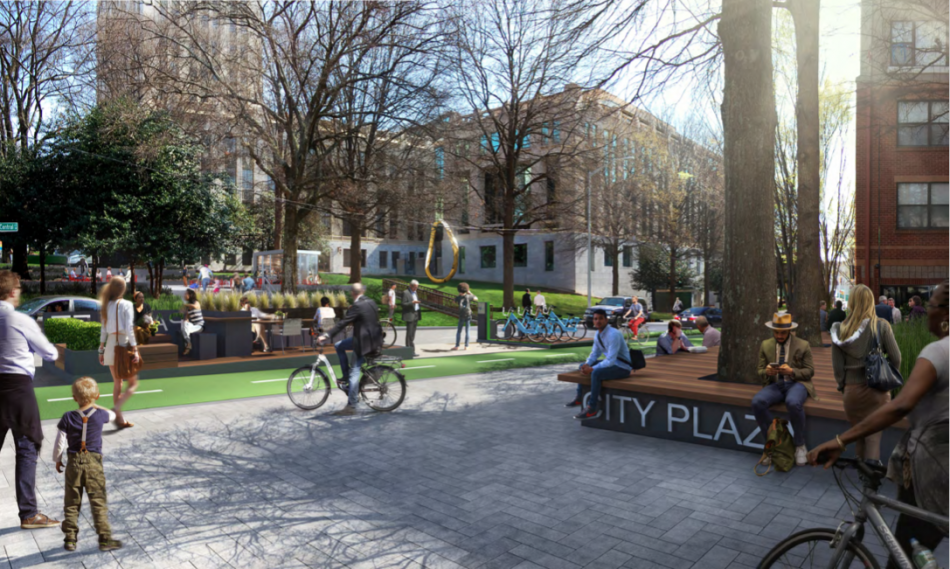